With Android 8.0 in the bag, the Nokia 8 has turned its attention to version 8.1 of Oreo. The beta version has started seeding – it’s a 1.55GB download that will only go through Wi-Fi.

The changes are relatively small and seem mostly battery related. An overdue perk is the Bluetooth battery percentage display. Settings and Power menus have been redesigned. Also, the Android security patch was bumped up to January.

Oh, and the hamburger emoji has been fixed. Juho Sarvikas even tweeted about it, cheese on top of patty (not the other way around) is a big deal. 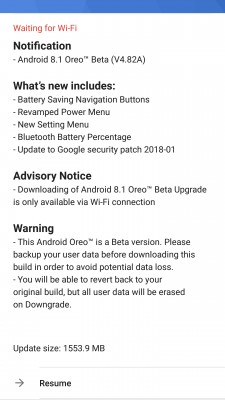 Anyway, you need to join Nokia Beta Labs (you can do that here). It’s advisable to back up your personal data before upgrading and it’s mandatory if you want to downgrade – going back to 8.0 will erase user data.

Thanks goes to Oren for sending this in!

When will beta program for 8.1 end

Maybe problem is with nokia camera app, you can download another camera app