The Nokia Asha 300 may not exactly fit in with today’s standards of newsworthy. With smartphones flexing their muscles at venues like CES, sporting ever-expanding app markets, HD screens and multi-core processors, it’s hard to see how an entry-level offering could produce much of a splash.

If, however, price is a factor, or you simply want a phone that is…well, simple, then the Asha 300 could definitely make some waves in your pool. Part of a new line of phones by Nokia, which feature a revamped S40 interface and 1GHz processor, the Asha 300, and its QWERTY sibling, the Asha 303, aim to cement Nokia's place in a market they have traditionally dominated. 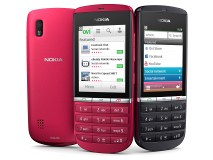 The Touch and Type S40 interface is at once the same yet different from the traditional non-smart UI from Nokia. Combined with an app store and a customizable homescreen, there are definitely elements borrowed from smartphones in an attempt by Nokia to extend the functionality while retaining the simplistic feel of the S40. The faster processor and 128MB of RAM are more than sufficient to run the S40 quickly and without hitches.

The Asha 300 walks that fine precipice between designing a phone that is contemporary, yet aims to appeal mainly to an audience where being contemporary is not as important as being simple and not too expensive.

We’ve all heard the expression “I just want a phone that works, don't care about the extra stuff.” With quad-band 2G and 3G support, the 300 does exactly that – it’s a no-nonsense worker bee of a phone. In fact, with Bluetooth, a 5MP camera, messaging and radio it will do even more should the need arise. The only ding in regards to important cost-cutting features is that it does not have the Wi-Fi support of the Asha 303.

All of this in mind, one of the main disadvantages of not having a smartphone is that you don't get multitasking. Save for being able to play music in the background, the Asha 300 will not be able to run multiple applications simultaneously.

Asha is the new name of Nokia's entry level phone lineup. The Asha 303, which we recently reviewed, succeeds the Nokia C3. The Asha 300 in turn is an obvious descendant of the C3-01. Interestingly, while the QWERTY-enabled Asha 303 upgrades its predecessor in almost every way, the Asha 300 looks and feels like a downgrade. That should make it even more affordable, but let's see what you get relative to what you pay for.

We're about to take a closer look at the exterior, and how it feels to trade stainless steel for plastic.

Just got the asha 502 with full touch screen.miss my asha 300.will swop back anytime,but lost my old phone.new touch screen not for me