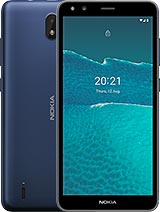 Anonymous, 19 Jul 2021Whatever happened to this respectable in the past company N... moreNokia belongs to HMD Global now. Its only a chinese android phone with "nokia" unfortunately.

Come on guys it's not that bad .... Nokia is affordable and nice

Whatever happened to this respectable in the past company Nokia, is such a pity...

For a cheap secondary device, it's actually not bad, considering the price of 50 Euro. At this price range you can only get dumb phones with limited features. But looks like it's marketed for African regions (no 4G connectivity).

hey there , I live in the past in 2011 in the hunololo and want to tell that that phone isn't usable nowadays

So what are the differences between these two except the newer Android and the display panel which looks worse?

I think soon we are going to get announcement from Nokia like LG.

It would have been better if Nokia stayed dead.

I mean note 2 had better specs