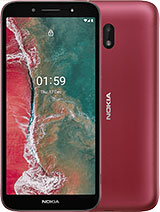 Mine doznt have a torch option

Does this phone support OTG?

The ph will not allow silent or private numbers to be answered. The only numbers you can answer are calls with visible ph numbers. No option to change this on the ph and Nokia support have no idea how to fix it.

This device has HD+ screen

That screen resolution is absolutely unjustifiable even for a 2021 budget smartphone.

If they could have just made the screen 1440x720 instead, it would've been a fantastic compact phone.

The 480x screen resolution is useless for browsing and pretty much everything else in the "smart" category. If you simply need a phone without the "smart" features there's absolutely no reason to pay $70, just get some $15 regular phone with a small screen for the basic info. Otherwise just add $30 and will get a usable phone with 720x screen.

Anonymous, 16 Dec 2020Who's really going to buy this? This is 2020, this pho... morepeople who arent too fussy about phone specs and want a cheap option, it's 70 euro after all

A galaxy S III with a custom rom will be even better than this.

with all due respect, I think low-end Nokia phones must have at least 2/16. tbh 1GB is legitimately so weak for this. but I think it's better for keypad phones. it will suit well for it. and for the camera should at least 8mp. other than that, I think it's ok

Who's really going to buy this? This is 2020, this phone has one of the worst specs ever!

I didn't know hmd is becoming a toy company, qHD?? Really, even at this price, even if it's a secondary phone, I don't know when was the last time I've seen a phone with sub 200ppi.

"shy to live, but dont want to die"