The gallery of Nokia C5-03 is nicely touch optimized and there are sweep gestures enabled for flipping through photos displayed fullscreen.

Browsing images on the Nokia C5-03

The gallery’s problem is speed. Loading a picture takes a couple of seconds even for small images. If you have a large number of photos it might take ages before the thumbnails are generated. Zooming and panning are not that much faster either. On the other hand, kinetic scrolling has been vastly improved. The real nuisance though is that photos in a folder require a double tap to display – one to select, another to open.

The Nokia C5-03 music player is pretty functional but its design could use a little freshening up – it hasn't changed since we first saw it in the Nokia 5800 XpressMusic. With user friendliness such a key aspect of full touch phones, it would be nice from Nokia to add some fun to the mix.

The process of adding tracks to the library is as simple as choosing the refresh option. You won't need to do that if you upload the music via the proprietary PC Suite application. With the huge number of supported formats you will hardly ever come across an audio file that the phone can’t handle.

Album art is also supported and if you don't like the default sound of the device you can enhance it by applying one of the five equalizer presets. And if they’re still not enough you can set new ones up in a matter of seconds.

Quite naturally, the player can also be minimized to play in background. However, if you haven’t set the Music Player to appear on the standby screen, you will have no way to control it. Your only option would be to go back to the full music player app using the Task manager.

Video player: back to basics

To begin with, a 3.2-inch screen is not the best thing to watch videos on. The lack of DivX and XviD codec support on the Nokia C5-03 doesn’t help either.

Of course, you can use the Ovi PC Suite built-in application that automatically converts all kinds of video files to the format and resolution your phone supports. The automatic converter though seems to compress the videos too much, even at the highest quality setting, and they look over-pixelated but so far it's the easiest way of getting compatible video content to your handset.

Using the RealPlayer, you can not only watch the videos saved in the phone's memory or in the memory card but also to stream Internet video content.

The FM radio on Nokia C5-03 has a neat and simple interface and can automatically scan and save the available stations in your area. It also has RDS support and automatic scanning for an alternative frequency. This means that if you're on the go, the C5-03 should take care of staying tuned to your selected radio station.

We have no grudges with the FM radio

We haven't seen a Nokia handset to disappoint in terms of audio quality for a while now and we are glad that the C5-03 didn't break the tradition. The handset isn't particularly loud but it more than makes up for that with spotlessly clean audio output.

Indeed, when used with an active external amplifier the Nokia C5-03 manages to pull off a spectacular performance, getting excellent scores all over the place. There is really nothing about it that doesn't match the best on the market.

Of course there is some deterioration when headphones are plugged but that's mostly detectable in lab conditions. Stereo crosstalk worsened, but still remained pretty respectable (we've seen handsets score less without headphones) and intermodulation distortion appeared, but we doubt those will be actually detectable in real life scenarios. 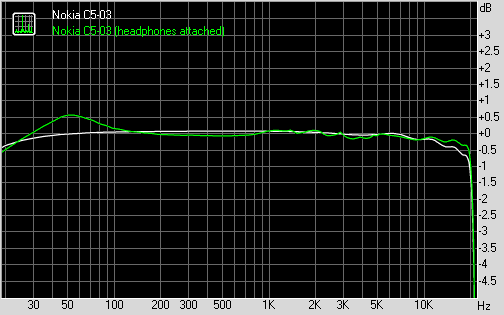 Is it suport whats app

hi,my nokiac5-03 dont work good.just send and call public,in web working like a shet.im good in making new machine ofcource just mecanicall,good with the anything with wood and perfect in bilt with the simpel tooles and damages mashin meny kind of we...

nokia c5-03 wifi connected or not