After several leaks the Nokia E63 finally got its official announcement today. Much like the rumor had it the handset is a slightly downgraded and more budget friendly version of the E71. Most of the business functionality is still there so the lower price tag might actually be enough to make it quite a success amidst the global financial crisis. 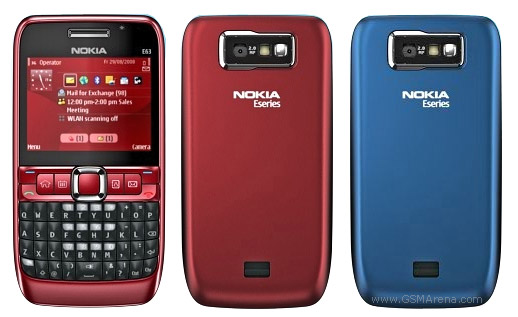 The Nokia E63 has got a full hardware QWERTY keypad and comes with a slim waistline of 13mm. Its body is lacking the metal finish of the E71 and is entirely made of plastic instead. Most surprisingly however it will have touch sensitive Navi wheel functionality and a 3.5mm audio jack that lack on E71.

The phone has a 2.36" 16M color QVGA display and up to 110 MB of internal memory, which can be expanded through the microSD card slot. According to the press release the Nokia E63 users will also have 1GB of online storage at their disposal though the latest Nokia service called Files on Ovi.

The Nokia E63 packs quad-band GSM and dual-band UMTS connectivity (which comes in three different flavors) but unlike the E71 has no HSDPA support. The other methods of data transfer on-board are microUSB port, and Bluetooth (A2DP and EDR) and Wi-Fi.

The Nokia E63 also lacks GPS and replaces the 3.2 MP autofocus camera of its elder brother with a 2 MP fixed focus snapper. The handset will start shipping in the coming weeks with an estimated retail price of 200 euro (250 US dollars) before taxes or subsides.

I have NOKIA E63. bt whatsapp it doesnt support. may help me..? it is the same as shown below..