Playing by the book

The music section is made up of Albums, Songs, Playlists, Genres and Artists. Videos feature All, Television, Music videos, films and personal - think of them like more of categories you can assign your videos to when syncing with your PC. The third section is where you can store all of your downloaded audio and video podcasts.

As a music player, it's pretty standard - your tracks are sorted by artist, album, playlists or you can view all songs. The interface is very similar to that of the stock music player, but under the album art it lists the next three songs to be played - really helpful if you're using shuffle. There's no way to manually reorder the upcoming songs, but you can reshuffle them if there's one you don't like. Sadly, there's no equalizer to be found here.

The video player in Windows Phone 8 has greatly improved codec support since the GDR2 update. Now it supports XviD, DivX, MOV and MP4 videos up to 1080p resolution. The few things it won't play are MKV files and videos using the AC3 audio codec. There is no subtitle support at this point.

There's an FM radio on board the Lumia 1320, thanks to the Lumia Amber firmware. You can use the loudspeaker for the FM radio, though you still need the headset connected as it doubles as an antenna. To enable the loudspeaker playback, just tap and hold on the station and select the appropriate option.

The Nokia Lumia 1320 makes for an adequate portable music player, offering decently clean audio output. Its volume levels could do with a little boost, but that's only going to be an issue for a small portion of the users.

The mid-range Nokia phablet did very well in the first part of our test, posting excellent scores for everything but intermodulation distortion. And that distortion level is hardly detectable outside of our lab.

There's next to no degradation when you plug in a pair of headphones. Outside of the usual stereo crosstalk increase (which isn't as bad as with some other phones), the readings are barely affected. The volume levels are somewhat uninspiring in both testing scenarios though. 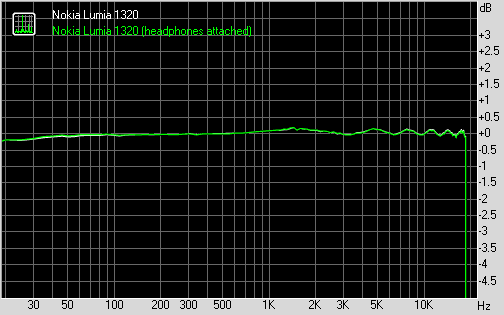 Thanks have a problem with my phone , the call history didn't appear

Nokia and Microsoft has given the Lumia 1320 phone as office phone. But it does not support pendrive connectivity via OTG cable. This create difficulty to take files from phone to pen drive. If it is possible then it will reduce more efforts...