People already have really high expectations for any PureView camera, so the first time we heard Nokia is halving the sensor resolution and reducing the size we were a bit worried. Then after we learned the Lumia 1520 will be lacking a xenon flash we started to prepare for a disappointment. Is this really a PureView camera that can live up to its brand? Let's find out!

We'll start off with full resolution 19MP photos first as they are the basis of the 5MP shots. Luckily, the images look really good - the amount of detail and contrast is great and while some of the less-objectionate luminance noise is to be spotted, there's no chroma noise. Just like the previous PureView cameras, with Lumia 1520 full resolutions samples you are able to capture everything, even tiny details that goes well beyond the capabilities of lower-resolution cameras.

Nokia went with color reproduction that is as accurate as possible on the 808 PureView, but then upped the saturation for the Lumia 1020. Having faced lots of negative feedback the Finns decided to revert to their original strategy with the Lumia Black update. And since Lumia 1520 comes with Lumia Black out of the box we were hoping that natural is what we'll get.

As it turned the resolved colors are indeed more natural and closer to the 808 PureView phone, although we did get the occasional off white balance. Luckily, with a viewfinder this big, you can easily see when the automatic white balance is failing and intervene via one of the virtual rings.

On a positive note, we were once again impressed by the dynamic range. There's no easy HDR mode (you'll have to use bracketing and combine the images manually) but the Lumia 1520 handles bright highlights and dark shadows in the same shot noticeably better than other smartphone cameras we've tested. Also, check out the macro shot - we couldn't get extremely close to our toy subject (the minimum focus distance is 15cm), but the shallow depth of field is very noticeable and works great to separate the subject from the background.

Let's move on to the 5MP shots. These photos are the ones you'll be sharing on Facebook or via email. They are also easily the best 5MP photos we've seen outside of the 808 PureView and the Lumia 1020. The noise is almost non-existent at this point and the per-pixel detail is really great. Unfortunately the lousy white balance remains so you need to be tweaking it manually more frequently than we'd like.

One of the unique features of the Lumia 1520 is the digital lossless zoom, so we tried that too. The samples below show a 5MP image with no zoom, a 5MP image at just under 2x zoom and a full resolution shot. Bottom line is - you can achieve the same result by cropping the full-res image in post processing, but you can opt to save yourself that hassle.

And here's a more clear representation of what a difference 2x zoom makes. 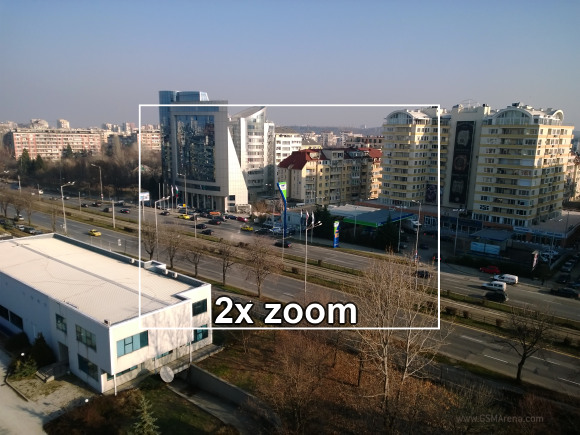 Finally, here is a quick shootout between Lumia 1520 and Lumia 1020 for you to compare. The larger, higher-resolution sensor of the Lumia 1020 helps it resolve more detail and produce images with superior dynamic range, although the difference isn't quite as huge as the sheer numbers suggests. Overall, the Lumia 1520 won't be causing its Lumia 1020 more compact sibling much trouble in the run for the best smartphone, but it certainly is the best-shooting phablet.

And here come the 5MP samples from both Lumia 1520 and 1020, which mostly paint a similar picture. The differences are further diminished with downsizing, but the Lumia 1520 is the clearly superior of the two great cameras.

Now it's time to see how well the new Lumia 1520 can do in low-light without a xenon flash. We used a low-light room in our office and tested both Lumia 1520 and Lumia 1020's low-light performances. First, we tried with the flash off, we just kept the AF assist light on to make sure the phones get the right focus. The noise levels on both Lumia phones are high but it's just luminance noise and there's a good deal of fine detail that would be lost on other cameras. The 5MP image reduces the noise and is actually very usable.

Then we made the room pitch dark, turned on the flash and snapped some more photos. The xenon flash is more powerful than dual-LED flash on Lumia 1520 and it lit the scene quite evenly, but the end result, white balance aside, is way closer than we expected. The resolved detail in the center of the frame is almost identical and while we'd still take the xenon flash, we have to credit the dual-LED setup of the Lumia 1520 with a very decent performance.

It's good to see Nokia worked its magic and managed to replace a xenon flash with a dual-LED one without compromising the image quality.

The Nokia Lumia 1520 shoots 19MP stills and there's only one phone in our database that comes close at that, the Sony Xperia Z1 at 20.7MP. You might want to use the tool's downscaling feature to compare the 1520 against other phones more easily.

Unfortunately you can clearly see the white balance is way off on all three shots and even though the resolved detail is great, the bitter taste remains.

The Lumia 1520 saves both a full resolution image and a supersampled one at 5MP. Here's how that looks compared to Lumia 1020's supersampled images and Xperia Z1's Superior Auto mode (which produces 8MP shots).

Video recording also greatly benefits from the OIS and oversampling. Zoom is enabled even during video capture and it can go up to 3x in 1080p mode. The 1080p videos are recorded at 30fps by default, but you can also get a more cinematic feel with the 24fps and 25fps options. These are available for 720p resolution (but there's no 60fps mode).

The Nokia Lumia 1020 also has four mics with the company's proprietary Rich Audio Recording for distortion-free sound recording in loud environments and Directional stereo when needed. The Lumia 1520 records video files with stereo audio at a high 256Kbps bitrate and standard 48kHz sampling rate. There's also Audio Bass Filter, which filters out low-frequency noise. It can be set to 100Hz (the default), 200Hz (strong) and Off.

The Lumia 1520 features Optical Image Stabilization (OIS), which highly improves the look of a video - it dampens hand shake and makes camera movement look smooth and professional (as opposed to shaky home footage). We recorded a short sample to show how the 1520 handles walking and panning. You can "see" footsteps in the video but the shaking from them is mostly not annoying. The slow pan looks almost Hollywood like, while the faster pan is jerkier. We did the test side by side with the Lumia 1020 for easy comparison.

OIS has become available on some Android phones too, but most of them can't do this - 3x lossless zoom. It's controlled with a pinch gesture or the one-finger Slide Zoom that was introduced on the Nokia 808 PureView (unfortunately, the volume rocker doesn't work). You can do it during video recording. With no supersampling, the image quality drops a bit, but it's still a top notch video.

Unfortunately, unlike the still camera performance, where the Lumia 1520 was a cut above its phablet competitors, its video recording capabilities are average at best. The sound recording is impressive, but the actual footage is way behind the Galaxy Note 3 and its 4K videos.

Here is a 30s 1080p sample we've uploaded on YouTube for you to enjoy.

You can also check this 1080p video sample, taken straight from the phone.

Comparing the video from the Nokia Lumia 1520 is easier as it shoots standard 1080p video. Here's how it stacks up against the Lumia 1020 and the Sony Xperia Z1.

Why are you replying to me. I don't care if you want this outdated phone with a new battery.

I wish Nokia would reissue the Nokia Lumia 1520 with a 5000 mha battery. The same hardware and software for the Camera and run it on Android 20. With that same black bar style. Greatest phone I've ever had. Even with the Windows system and i...