Retail box on the modest side

The Nokia Lumia 620 retail box is nothing special. You get a standard set of headphones, an A/C adapter, and a standalone microUSB cable. After you've removed the various protective stickers off the Lumia 620, a number of leaflets complete the tally.

We would've liked a second color option for the back panel or a complimentary microSD card, but given the Lumia 620's relatively low off-contract price, we're happy with the set overall.

Nokia have done a good job keeping the Lumia 620 grounded in terms of dimensions. At 115.4 x 61.1 x 11 mm the only place where it isn't all that great is the thickness, but that's still easy to live with. Weight is also kept under wraps tipping the scales at 127 g, which is reasonable.

In these size-tolerant times the Lumia 620 may even be called tiny - compared to the iPhone 4S it's an almost identical match in length, while managing to add a bigger 3.8" screen into the mix.

The Lumia 620 is attractively priced so its needs to cater to all audiences equally. We like what Nokia have done to please all manner of buyer, young or old, while the flashy lime green, orange, magenta, yellow and cyan are in keeping with the Lumia line's flamboyant side. For a more professional look, the white and black versions are subtler and more adult-like in their demeanor.

Ours was a black review unit this time around and Nokia has kept the gloss in the paint shop, leaving this one with a nice conservative matte finish.

The front is entirely covered with glass and wrapped around by the back panel. Under the glass hides a 3.8" ClearBlack LCD screen of WVGA (480 x 800) resolution. Under it lies the WP-rudimentary three-button combo of a capacitive variety while above the screen, stacked together in the limited available space, we find an ambient light sensor, front-facing camera, proximity sensor and the earpiece.

The right side plays host to the single-piece volume rocker and identical power and camera buttons. Distinguishing the camera from power button takes some getting used to, but we caught on fairly quickly. The buttons themselves are nicely clickable but glossy, meaning they tend to get smudgy in contrast to the otherwise matte body.

The left side is completely bare on the Lumia 620

The right side is where you'll find all the buttons

The top is where the 3.5 mm headphones jack resides alongside the second noise-cancelling microphone.

Right at the center of its bottom the Lumia 620 has a microUSB port for charging and data transfers and the primary microphone pinhole.

The microUSB and microphone pinhole at the bottom

The wrap-around back panel employs a two-layer finish, similar to the Galaxy S III's hyperglaze back. There's a transparent layer on top of the base one, which is colored in one of the six colors the Lumia 620 is available in.

On the panel itself Nokia has placed a logo, the 5 MP camera with a single LED flash and a tiny loudspeaker hole, under which lies the grille itself.

Surprisingly, removing the back panel is not among the easiest of tasks even for experienced chaps such as ourselves. To get it off, you need to grab the top of the back panel with your fingernails from the front of the device and apply pressure over the camera module with your thumb while pulling back with your fingers. The panel can only slide out from the top as on the bottom the microUSB holds it in place.

With the panel out of the way, we find the battery, the microSD card slot (up to 64 GBs), and a peculiar slide-out micro SIM slot. We see the latter more and more in devices these days. It seems there's a war going on between manufacturers for the most ingenious SIM card slot, but for now we only see increasingly more ridiculous designs instead.

We have two issues with the battery of the Lumia 620. First, it falls out of its place as soon as you tilt the phone, which isn't ideal for people that like to access their memory card slot often.

The 1300mAh capacity is getting us a bit worried, but we'll have to wait until we've concluded our battery tests on the Lumia 620 tomorrow until we know for sure if that's really a problem.

UPDATE: Here go the results. The Nokia Lumia 620 got an endurance of 36 hours - that means you'll need to charge the phone every 36 hours if you do one hour of calling, web browsing and video playback a day. 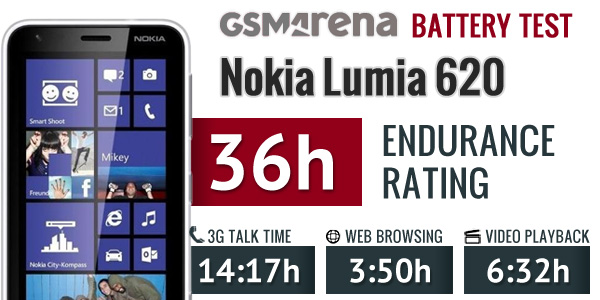 Pls i just bought lumia 620 but am ginding it very hard in setting My email address so u could start downloading i creating an email using my previous accout but each time i tried loging i,got this msg "incorrect email or password" pls how can i go a...

I've had my Lumia 620 for almost 3 years and I love it! It feels smooth and cute in my hand, it is not too big - just the right size. It takes excellent pictures. I've had no issues with it at all. The are many more apps now than when I bought it- wh...