Microsoft's requirements for a Windows Phone mean there's little variation in terms of controls across the product range.

The Nokia Lumia 625 is no exception. It has three capacitive keys below the display - Back, Home and Search. At the edge where glass meets frame is the microphone pinhole, while above the screen is the VGA front-facing camera, the ambient light and proximity sensors, and the earpiece.

Three capacitive keys below the screen • standard sensors above it

The right side of the phone is where all of the hardware buttons are. From top to bottom they include the volume rocker, the Power/Lock key, and the two-step camera shutter key. Like we mentioned, all the buttons come as part of the back panel, so they'll keep a uniform color should you choose to replace it.

The left side of the device is bare.

The Power/Lock key can be used to wake up the screen, but another way to unlock the Nokia Lumia 625 is to long press the shutter key. There's an option to either start the stock WP camera or Nokia's custom Smart Camera (which we'll cover later on).

The top and bottom of the phone hold the 3.5mm audio jack and USB port, respectively.

3.5mm audio jack on top • microUSB on the bottom

Around back, you'll find the 5MP camera alongside an LED flash, and there's a speakerphone grille towards the bottom.

We've covered the removable back panel in detail, so let's get into what's underneath. The 2000 mAh battery is sealed within the inner body and therefore non-user-replaceable, which is a bit of a downer considering the non-unibody design. To the right of the camera lens you'll find the microSIM and microSD card slots stacked on top of each another.

Underneath the back panel are the microSIM and microSD card slots

The 2000 mAh unit inside is rated at for over 15 hours of talk time or 552h of stand-by in 3G networks, but if its endurance is not enough for you, you'll have to carry either an external juice pack or a battery case - both of which are pretty awkward and uncomfortable. 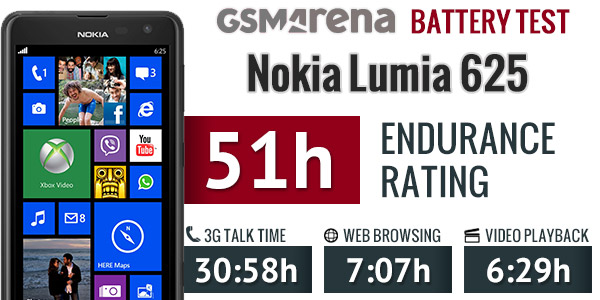 The complete test can be found here.

The tempered back and rounded edges along the sides of the Lumia 625 make handling the device a very pleasant experience, while the matte plastic provides very good grip, on top of being fingerprint-resistant.