Photos with uploads to SkyDrive

Nokia is pushing its own music service called Mix Radio through the Nokia Music app ahead on the default Music + Video app. It offers free music streaming (it works out of the box) and has an extensive library of tracks. While it is mostly streaming oriented, you can make tracks available offline in Mix Radio (they remain on the device only temporarily though).

Unlike competing services you can also browse a specific artist and even buy songs to keep if you like. There are plenty of charts (e.g. Top sellers, Best of 2013, Songs for Fall) if you're looking for something new too.

There's an FM radio on board the Lumia 625, thanks to the Lumia Amber firmware. You can use the loudspeaker for the FM radio, though you still need the headset connected as it doubles as an antenna. To enable the loudspeaker playback, just tap and hold on the station and select the appropriate option.

The Nokia Lumia 625 audio output is hardly the best we have seen, but it's not too bad to make any difference to non-audiophiles either. The volume levels are average when connected to an active external amplifier and just above average when used with a pair of headphones, while the overall output is decently clear.

In the active external amplifier part of the test the Lumia 625 managed mostly excellent scores, but the fairly high intermodulation distortion prevents us from giving it full points.

The degradation when you plug in a pair of headphones consists of a modest increase in stereo crosstalk, but it's certainly not the worst we have seen. Some extra distortion creeps in, though. 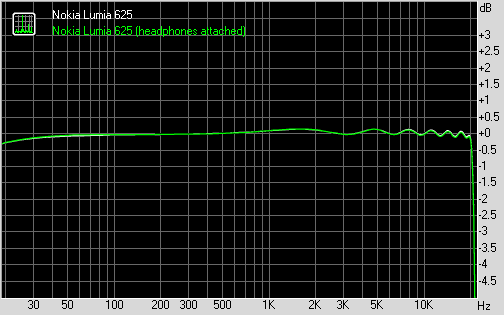