At 127.9 x 67.5 x 9 mm, the Nokia Lumia 720 certainly feels like it could've been at least a little more compact for a smartphone with a 4.3" display. The Motorola RAZR i, which is probably our favorite reference, is half a centimeter shorter in each direction, which makes quite the difference in handling.

However, the Nokia Lumia 720 handles reasonably comfortably and is actually the slimmest Lumia smartphone to date. Considering the screen size, the less than perfect use of the available space is something you can quite easily live with, even if you don't have particularly large hands.

The Nokia Lumia 720 sized up against the Lumia 520

As for the weight, at 128g the Lumia strikes a great balance. It's not overweight like the Lumia 920 and yet it manages a reassuringly solid feel in hand.

The Nokia Lumia 720 follows the design language of the company's Lumia 920 flagship, employing a similar polycarbonate unibody. Nokia will be offering a range of snap-on covers too, which will enable wireless charging. Depending on the color you choose you will either get a glossy (like our white review unit and the red version) or matte (the blue and black versions) finish, but they both look pretty sleek.

The Lumia 720 is quite the looker

The visual appeal of the smartphone gets a boost of its pleasingly slim waistline. The subtly rounded Lumia 720 fits nicely in the hand and looks even slimmer than it actually is. The curved screen, a la Nokia N9, is much appreciated too, especially in sideways swipes, which are frequently used in the Windows Phone UI.

Overall, the Nokia Lumia 720 is certainly among the most attractive offerings in its class. It's a gadget you won't mind being seen with and one that might even make a few Lumia 920 owners a little jealous. And that's as good a compliment as a mid-range smartphone can hope to receive.

The Nokia Lumia 720 comes with a 4.3" ClearBlack IPS LCD of WVGA resolution. In the day of 1080p screens, its pixel density of 217 ppi doesn't sound particularly exciting, but the Windows Phone 8 platform is designed in such a way that the relatively low pixel density doesn't really show. 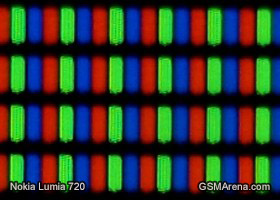 Of course when browsing images or surfing the web the Lumia 720 won't be able to provide as much fine detail or fit as much content, but on most occasions the WVGA resolution feels perfectly adequate. Besides, there are only a handful of smartphones in the Lumia 720 price range to offer even 720p screens, let alone 1080p displays, so the Nokia mid-ranger has little to worry about.

The display has excellent image quality

Even more so, when you consider that its ClearBlack screen is excellently bright and provides very good contrast, as testified by the measurements in our test. Viewing angles are splendid, too, and while there's some color shift when you reach extremes, everything on the screen remains perfectly legible at all times.


Here's the display pixel arrangement under a microscope.

Sunlight legibility turned out pretty good, too, with the Lumia 720 easily ranking in the upper half of our chart.

You can find more about our display testing process here.

This phone is a rip-off! Single SIM, 1/2 GB RAM, really suck! Good thing I'm a Nokia lover. Are Microsoft and Nokia have same quality? Thanks

Hi everyone ! I have a Lumia 720 and have been using for more than a year now. Till now I had no issues but recently noticed horizontal black lines on the whole screen. I have taken screen shots but couldn't find lines in them.I am quite sure my ph...