Above the screen you will find a discreet earpiece, the ambient light and proximity sensors, as well as the front-facing camera.

The earpiece and the front-facing camera sit above the screen

Below the screen are the three touch-sensitive buttons for getting around the Windows Phone 8 UI. The microphone pinhole is also here.

The usual three-key combo below the display

The 3.5mm audio jack is the only thing of interest on the Nokia Lumia 820's top.

Moving on to the bottom of the phone, we find the microUSB port and the single speaker.

Taking a look at the smartphone’s bottom

The back of the device is where the 8MP camera lens and dual LED flash can be found. The Carl Zeiss certified lens is set within a chrome plate that's a rather subtle accent on our black test unit's battery cover. We're not so sure about the contrast that will make it pop on a bright red or yellow exchangeable cover.

The 8 megapixel camera lens is at the back

To open the Nokia Lumia 820 battery cover you have to force a finger nail in the thin gap and carefully undo the stops and pull the cover from around the phone's inner body. It’s a bit harder compared to most other solutions, but the upside is there're almost no visible gaps, which benefits the overall looks of the smartphone.

Taking a peek under the hood

There’s good news and bad news under the hood. The bad news is that despite the ample available space Nokia only managed to fit a 1650 mAh battery in here. That’s still rated to last for up to 330 hours of stand-by or 8 hours of talk time on 3G networks.

In our dedicated battery test, the Lumia 820 achieved an overall endurance score of 40h. This means that you’ll have to charge the smartphone every 40 hours if you use it for an hour of talking, an hour of web browsing and an hour of video playback per day. 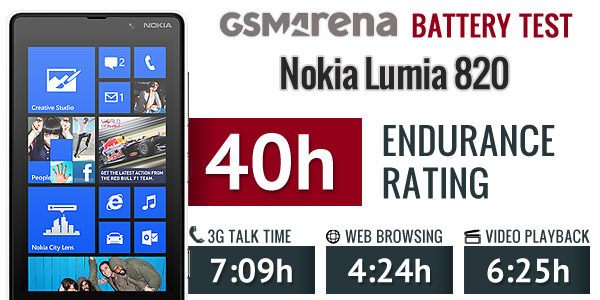 The good news here is the microSD card slot, which lets you increase the 8GB of in built storage on the Lumia 820 up to five-fold. microSD cards are going for pennies these days, so you won’t need to pay the premium manufacturers charge for smartphones with more internal storage out of the box either.

The Nokia Lumia 820 is comfortable to use and single-handed operation is relatively easy. As we said, it could have been narrower (and lighter for that matter), but having all the controls on one side certainly helps.

The Nokia Lumia 820 held in hand

The smartphone’s curved sides allow it to fit perfectly in your hand. The matte finish works well to improve grip and the handset looks like it will last for quite a while.