The Nokia Lumia 920's retail package is a pretty standard affair. Inside the moderately-sized box you'll find a USB cable, an A/C adapter and a headset of slightly higher quality than what most of the Lumia 920 competitors typically have. It's nowhere near though the Beats headphones that some HTC smartphones used to come with in the early days.

The other items inside the box are the SIM eject tool and a bunch of leaflets.

The Nokia Lumia 920 measures 130.3 x 70.8 x 10.7 mm, which probably doesn't mean much on paper, but this is the first smartphone in quite a while that has us wondering whether some lines have actually been crossed, in terms of size, weight and comfortable use.

By comparison, the LG Optimus G fits a larger 4.7" screen of the same aspect in a body that's only a tad taller, but both narrower and slimmer. The Samsung Galaxy S III has an even bigger 4.8" screen, and the difference in body size is negligible compared to the difference in screen size (4.5-inch for the Lumia 920).

All three phones are pretty much the same size, with both LG and Samsung droids taller, but none of them has made us worry about or question the comfort of use. The Lumia 920 on the other hand instantly looks like the heaviest of the bunch - which it actually is.

The Nokia Lumia 920 weighs 185g, which is about the weight of a Nokia communicator - if anyone remembers those. Don't get us wrong, we are all for the great build and solid feel but the Nokia flagship is heavier than a Galaxy Note II, which comes with a 5.5" screen, a 3100 mAh battery and the S Pen tucked inside.

Of course, the optical image stabilization alone contributes toward both the size and weight but thickness aside, the screen bezel is a bit too wide. Anyway, just make sure the Lumia 920 is something you can actually handle. This one is definitely not for every pocket, or hand.

If there's one thing that can make you forgive the Nokia Lumia 920's less than stellar use of the available space, it's the build and finish. The Lumia 920 looks and feels every bit the flagship part, with the polycarbonate unibody and the curved display working extremely well together.

It's hard to say if the Nokia Lumia 920 is the best looking smartphone out there, but it's certainly in the running. Plus there are quite a few interesting colors to pick from - there's the classic black that feels grown-up and to-the-point, but also the fresh looking Yellow, White and Red paintjobs for those after a more expressive style.

And it's not just about the looks either. The non-painted unibody is built to last and even when you scratch it, the same color polycarbonate appears underneath, so it's way harder to spot.

The Nokia Lumia 920 comes with a brand new PureMotionHD+ display, which is certainly one of the smartphone's key selling points. Nokia has obviously invested a lot of effort in its development and it has quite a lot to show for it.

For one, this is the first capacitive touchscreen flagship to support operation with gloves, which might make the flagship smartphone a favorite of winter sports fans.

There's also the higher than regular refresh rate, which should make scrolling text smoother than ever, though to be honest, we are yet to spot the real-life advantages of that.

The second generation ClearBlack display does pretty well in terms of image image quality - the Lumia 920 display has nice colors and moderately deep blacks. It can't quite match the perfect blacks of AMOLED in complete darkness, but due to its low reflectivity, it's a good performer in everything from moderately-lit to bright environments.

The viewing angles are quite good too and while there's notable brightness loss when you go to extremes, everything on the screen remains legible.

Here's how the Nokia Lumia 920 did in our dedicated display tests.

The Nokia flagship showed good contrast in the first one, and while its sunlight legibility isn't class leading, it's enough to enable relatively trouble-free use outdoors even on a bright sunny day.

Here's a shot of the Lumia 920 display matrix from our microscope. You can clearly notice the density advantage over the Lumia 820. 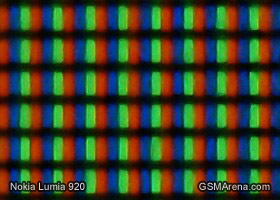 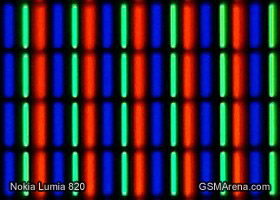