It appears that the Nokia Lumia 920 and Lumia 820 duo of Windows Phone smartphones will descend upon Germany on November 1 - only a few days after Windows Phone 8 becomes officially available. The country's largest retailer MediaMarkt has listed the launch date on its pre-order page for both devices. 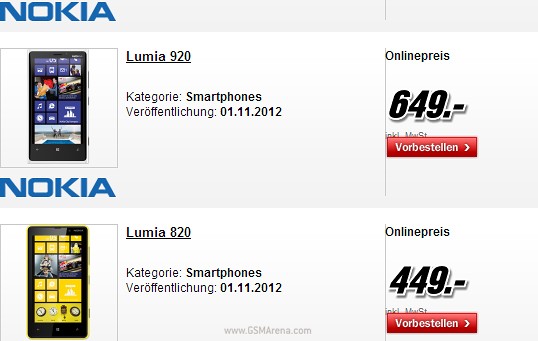 The Nokia Lumia 920 flagship is priced at the hefty 649, while the mid-range Nokia Lumia 820 will set overly eager users back with a more bearable 449. Both prices include the applicable taxes and will secure the buyer a handset with no contract commitment.

And they leave in what planet

My godparent's namesake's roommate's pen pal has tried Lumia 920 and said it was great!

hahaha I've read all of these posts, cause my girlfriend is gonna get herself that Nokia 920... I can only say, the smartphone industry really has its loyal FANS... Me, i have a Android SG-Note smartphone, a iMac and iPhone4, a Vaio VGN-AR71L on Win...