HMD Global has just started sending out invites for its MWC event in Barcelona, which is taking place on February 23 at 4:30pm local time (registration starts half an hour earlier, as depicted on the invite seen below).

The company unsurprisingly isn't telling us what to expect specifically, but recent reports have made it clear that a new true Nokia flagship will only arrive later in the year. It might make up for the delay in release with a world first under-display camera, although some of its competitors say that's not currently feasible. 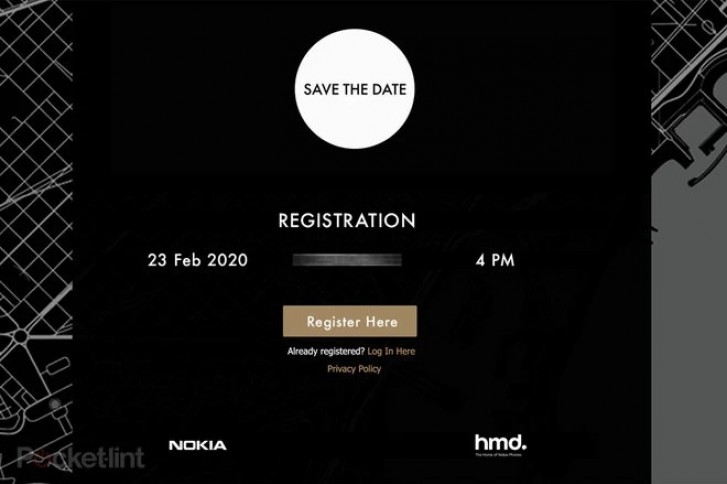 Until then, we'll have to make do with lower-end smartphones. The Nokia 8.2 might make an appearance with a mid-range 5G chipset, aka the Snapdragon 765, paired with 8GB of RAM and 128GB of storage. This will reportedly retail for under €500, and it could sport a pop-up selfie camera and a rear-mounted fingerprint scanner.

The Nokia 5.2 and Nokia 1.3 could also show up, with the former apparently being powered by the Snapdragon 632 SoC and boasting a 6.2-inch notched LCD screen, 3/4GB of RAM, 32/64GB of storage, and a dual rear camera setup. This should end up retailing for €169.

The Nokia 1.3 will be a €79 device with a 6-inch LCD, a MediaTek chipset, 1GB of RAM, 8GB of storage, and Android 10 (Go Edition) on board. The others should all be part of the Android One program and run the full version of Android 10 out of the box. We've also heard rumors about a touchless Android phone with buttons, and a cheap (€45) fitness tracker.

Either way, we'll be on the ground in Barcelona covering the announcements, so stick around for that.

is it good for gaming ?