A great display is essential for a great gaming experience, and the Red Magic 6 already had a solid panel. It was a 6.8-inch, FHD+ one with a maximum and industry-leading 165Hz refresh rate and a snappy 500Hz touch sampling rate to match.

Nubia claims the main display upgrade in the Red Magic 6S is the touch sampling rate. The Red Magic 6S Pro advertises 720Hz, particularly for multi-finger input. This definitely sounds like a hefty boost from the previously advertised 500Hz, even if it's just with a single-finger input.

However, it is one of those specs that is hard to measure, harder still to compare and almost impossible to translate into actual latency within the entire input and output chain of the devices. That is to say, the time from touching to screen all the way to getting a change in the image on screen as a response. 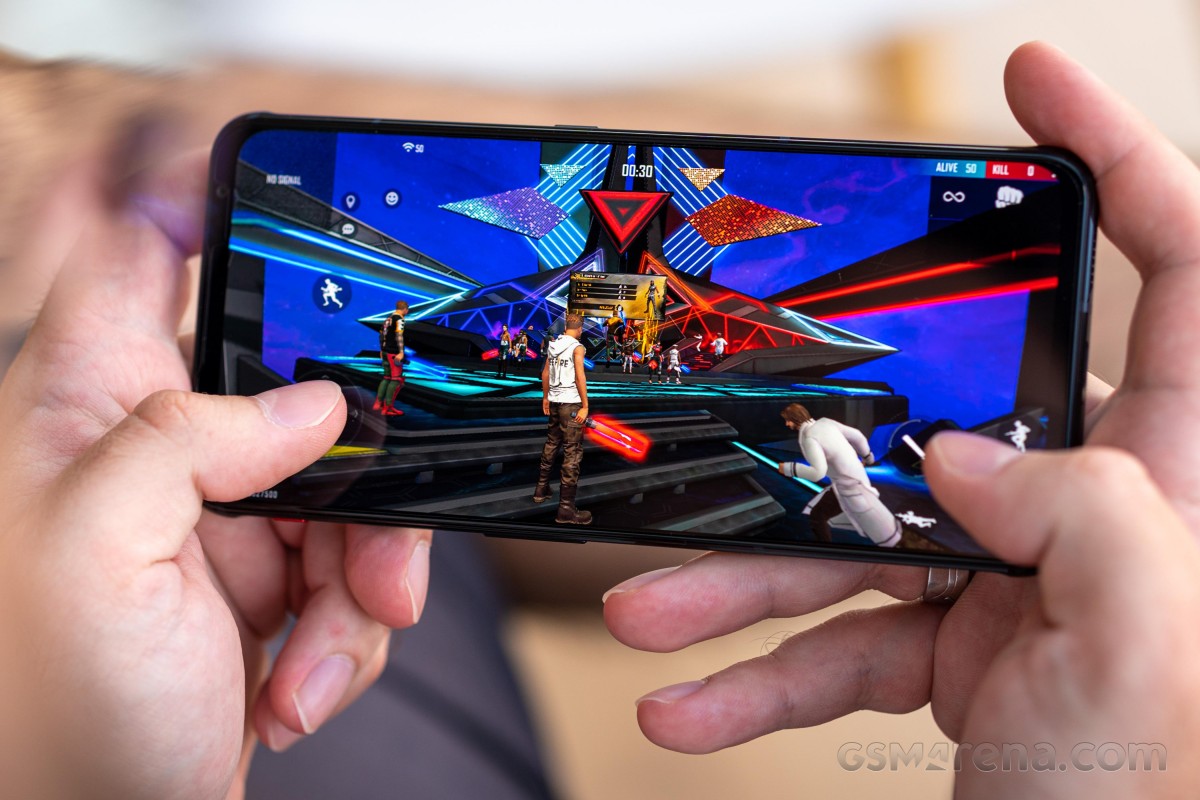 Since we can't realistically test this particular display upgrade in any meaningful way, it is a case of "more means better" and we just have to take Nubia's word that things have been improved even further, without needlessly digging too deep into what are likely PR-motivated numbers and stats.

On to things we can test then and display brightness - a bit of an issue on the vanilla Red Magic 6, which only managed 444 nits and clearly improved for the Red Magic 6S Pro, where we measured at 529 nits on the slider.

That's still a far cry from modern flagship territory, and not particularly close to the advertised 700 nits. Though, to be fair, the latter figure was likely achieved on a smaller screen test area.

The extra brightness could be due to some software improvements in brightness behavior, which were much needed on the original Red Magic 6 we tested. Though, the Red Magic 6S Pro still seems to lack a max auto mode for bright conditions. On the flip side, the higher number could hint that the Red Magic 6S is using a different panel.

Color accuracy was a problem on the vanilla Red Magic 6, and once again, our tests on the Red Magic 6s Pro didn't come anywhere close. Instead, the Red Magic 6S Pro consistently hits double-digit deltaE values for both sRGB and DCI-P3 color spaces, regardless of the selected color mode. And the vast selection of available modes on the phone (including ones that clearly mention a certain color space) plus the custom white point adjustment options are all sort of a slap in the face since no combination managed to turn out even remotely color-accurate output.

Still, in "normal" and "vibrant" modes, colors look nice and punchy on the Red Magic 6S Pro and its lack of a punch-hole selfie camera, plus powerful stereo speaker setup all add up to a very pleasurable multimedia consumption experience.

Unfortunately, HDR is a bit of a mixed bag. On the one hand, the OS reports support for HDR10, HDR10+ and HLG, which is great, but Netflix didn't want to offer HDR content. That, however, is likely down to the Red Magic 6S Pro being absent from certain support lists, since we are reviewing an early unit. We even had to sideload the Netflix app, since it was blocked in Google Play Store.

By the way, the early nature of our unit is one of the reasons why we won't be focusing on software too much. But, we digress.

The Red Magic line has, unfortunately, been struggling a bit in the battery life department. The Red Magic 5S was hit pretty hard by the lack of good automatic refresh rate switching. Once set to its maximum of 144Hz, basically everything was running at 144Hz all of the time, essentially wasting energy. As for the vanilla Red Magic 6 - its battery was tanked by bad standby battery endurance.

We are very glad to say that the swap to the Snapdragon 888+ or perhaps some other software change has managed to address the standby endurance, and the Red Magic 6S Pro performs very much in line with the other Snapdragon 888+ device we recently tested - the ROG Phone 5s Pro.

In fact, all battery endurance tests fall in line pretty nicely with those on the Asus, as long as we correct the numbers to account for the different battery capacity - 5,050 mAh on the Red Magic 6S Pro and 6,000 mAh on the ROG Phone 5s Pro. 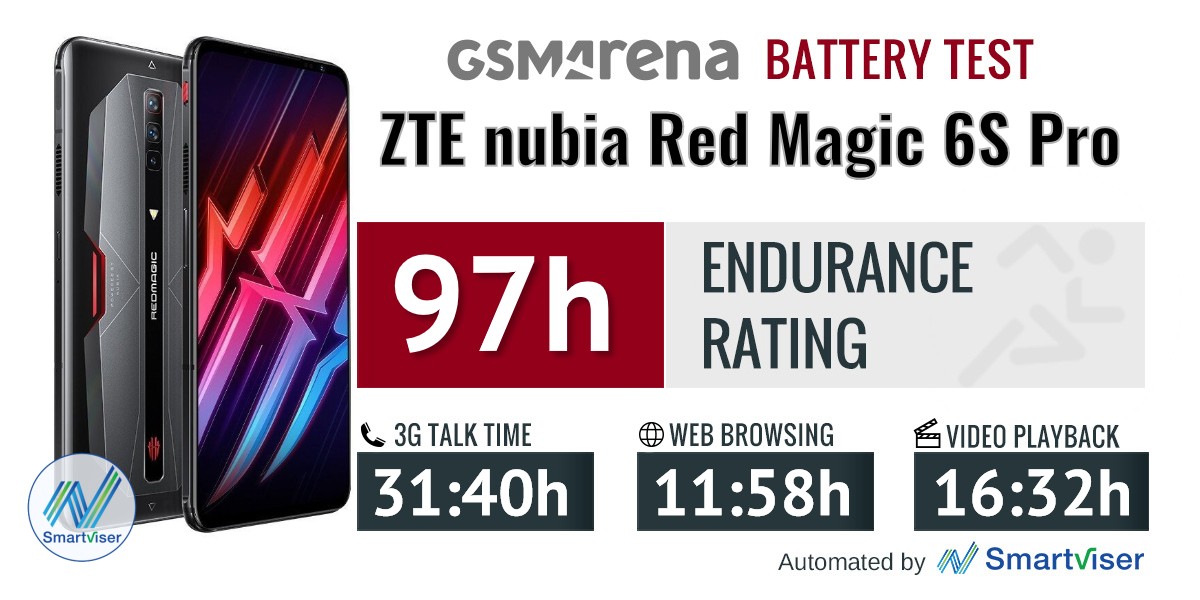 Compared to the vanilla Red Magic 6, the 6S pro does a bit worse in calls, but not by much, within what we would consider the margin of error. Same goes for its web browsing test. It was done at the maximum 165Hz refresh rate. On the other hand, the Video test gets a notable endurance boost, which we also have an explanation for. While the vanilla Red Magic 6 only managed to drop down to 90Hz for this test, the Red Magic 6S Pro consistently triggered 60Hz refresh, effectively saving some battery in the process.

Overall, while 97 hours of total endurance is still not great, even for a gaming phone, we have to commend ZTE for fixing the standby power draw issues that have been plaguing the vanilla Red Magic 6 and the 6S Pro.

Like we mentioned, the Red Magic 6S Pro ships with a 30W charger even though the phone itself supports up to 66W of charging.

The 30W unit which we got manages a full top-off in about 1 hour and 10 minutes. Interestingly enough, the Red Magic 6S Pro was a bit slower to charge than its vanilla sibling. Frankly, we can't exactly say why, but it probably has something do to with an intermittent error message we kept getting while charging saying something along the lines of - "charging has stopped. Charging voltage is too high, replace charger", regardless of what charger or cable we used. 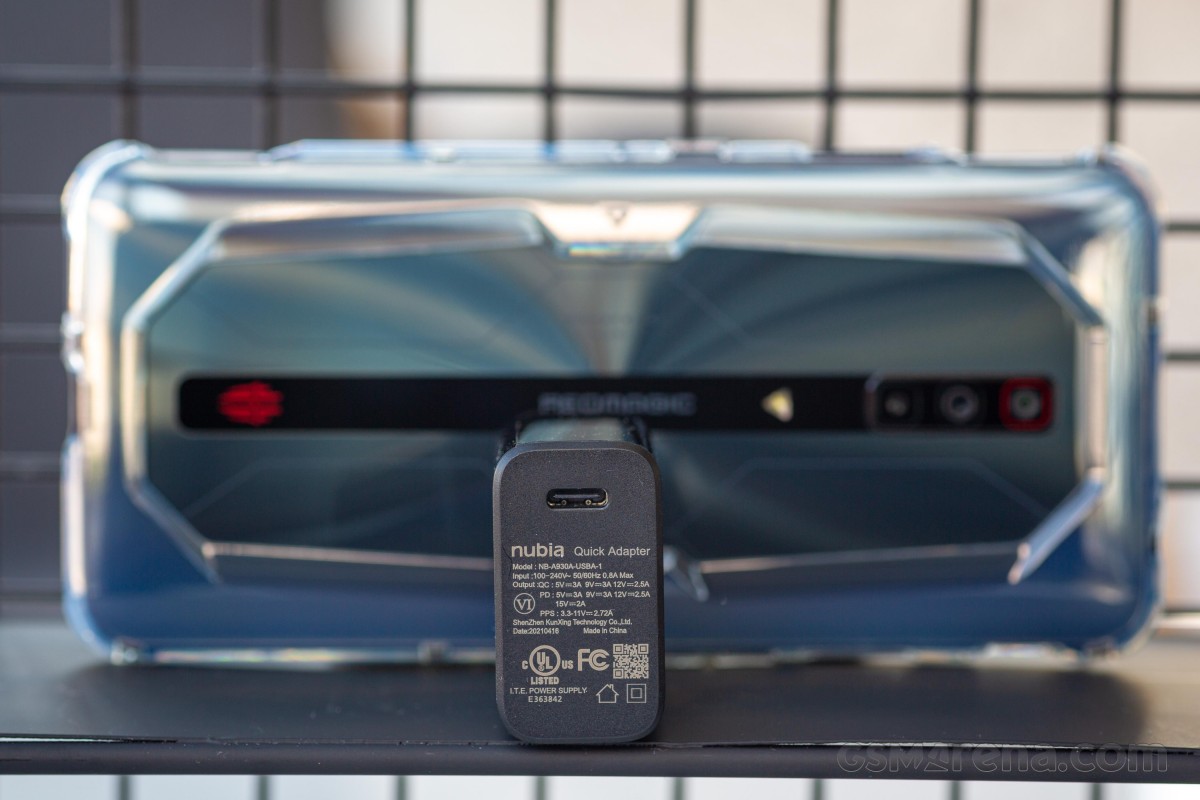 Once we got our good 100W PD charger and hooked that up to the Red Magic 6S Pro, charging was a lot speedier, which is great to see. Chances are that you might already have a 65W PD charger in your home, or alternatively, picking one up now would be a good investment going forward anyway.

- Self-claimed expert - Owns every "top phone" - Makes arguments with no backing Shilling much?

No it is not you just have no clue what you're doing. Leave that up to the experts like me

I own every top phone as of 2022. Rm6s Pro clearly is better than any other one from Real World experience.. but when you find that perfect phone that has no bugs and makes you win every pubg battle oh, please let me know cuz it doesn't exist