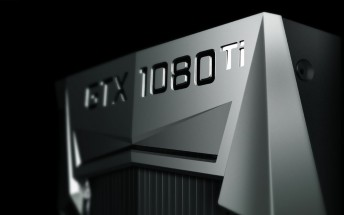 NVIDIA has announced the much anticipated flagship of the GeForce series, the GTX 1080 Ti. Based on the same GP102 GPU as the Titan X (Pascal), the 1080 Ti promises to offer nearly the same gaming performance as NVIDIA's most powerful single GPU graphics card but at nearly half the price.

The 1080 Ti features an improved thermal design with a radial fan and vapor chamber design. The removal of the DVI port on the side also means there is now a full slot for the fan to throw the heat outside. The 1080 Ti now includes three DisplayPort 1.4 and one HDMI 2.0b with an adapter for DVI provided in the packaging.

The GTX 1080 Ti will be available worldwide from March 10 for a price of $699 for the Founder's Edition and OEM versions, with pre-orders starting March 2. There will be no separate standard and Founder's Edition versions this time with NVIDIA making its best available at the standard edition price instead.

In other news, the GTX 1080 is receiving a price drop, from $599 for the standard OEM version to $499. Moreover, the 1080 and 1060 will now also benefit from the faster memory on the 1080 Ti, with the 1080 getting 11Gbps GDDR5X from the previous 10 and the 1060 getting 9Gbps GDDR5 from the previous 8. OEMs will have the choice to include these memory upgrades in their cards and sell them as "factory overclocked".

This is the sad part about technology as it progresses it becomes cheaper and more powerful.. But its a matter of learning how to be contented on what you have.. The beauty of a pc set up is that it allows you to do anything you want and I will purch...

This is a very good GPu since it has the processing power of the Titan for a much cheaper price !!! This is my upgrade card