The backs of the two phones look identical until you come closer and start noticing the differences. The camera island is not a separate piece of ceramic but rather part of the rest of the Gorilla Glass 5, just cleverly painted to make it look separate. It also doesn't blend with the side frame the way it does on the 10 Pro. 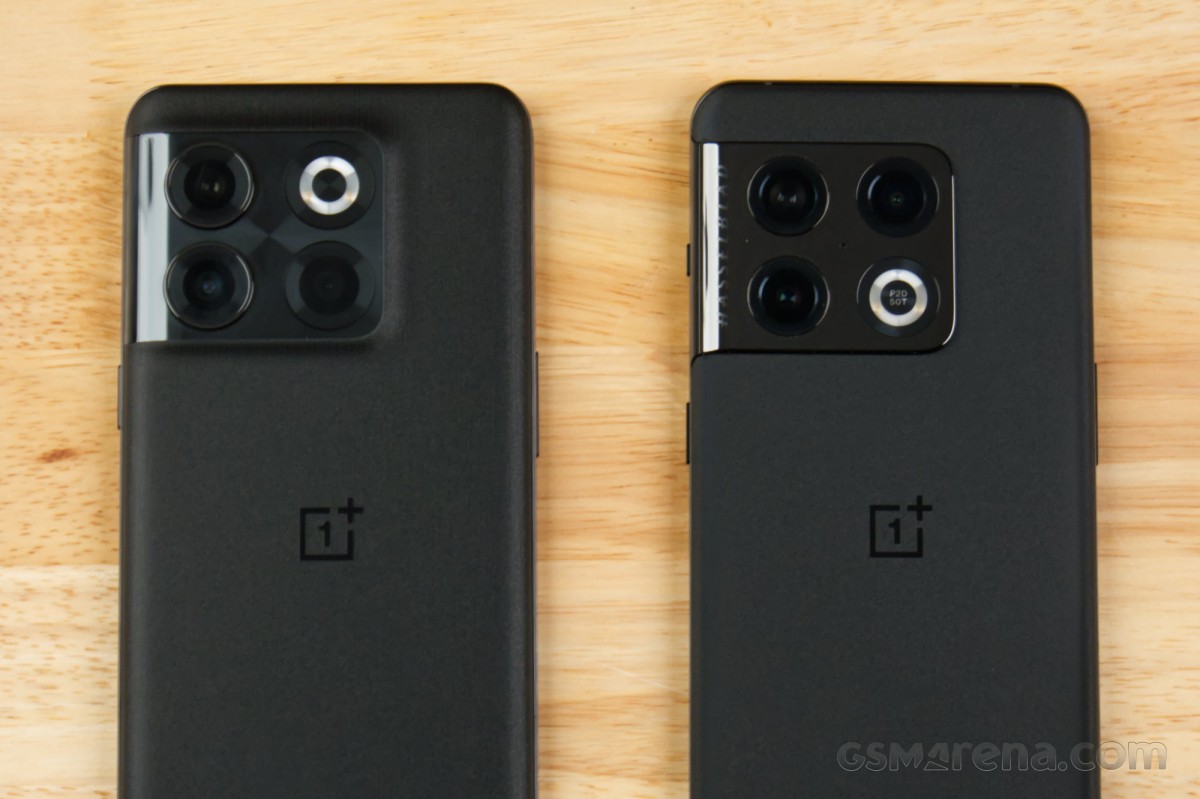 The camera cluster has the familiar four rings although the flash has been relocated to the top right. The rings are also not symmetrical; the two on the right are clearly larger, which looks a bit odd.

The glass back on the OnePlus 10T has some interesting things going on. The Moonstone Black variant has a rough, stone-like texture to it that OnePlus says is inspired by the texture of basalt. It's quite unlike anything we have seen being done with glass before and is very unique. As a bonus, it also does not show any fingerprints or smudges. 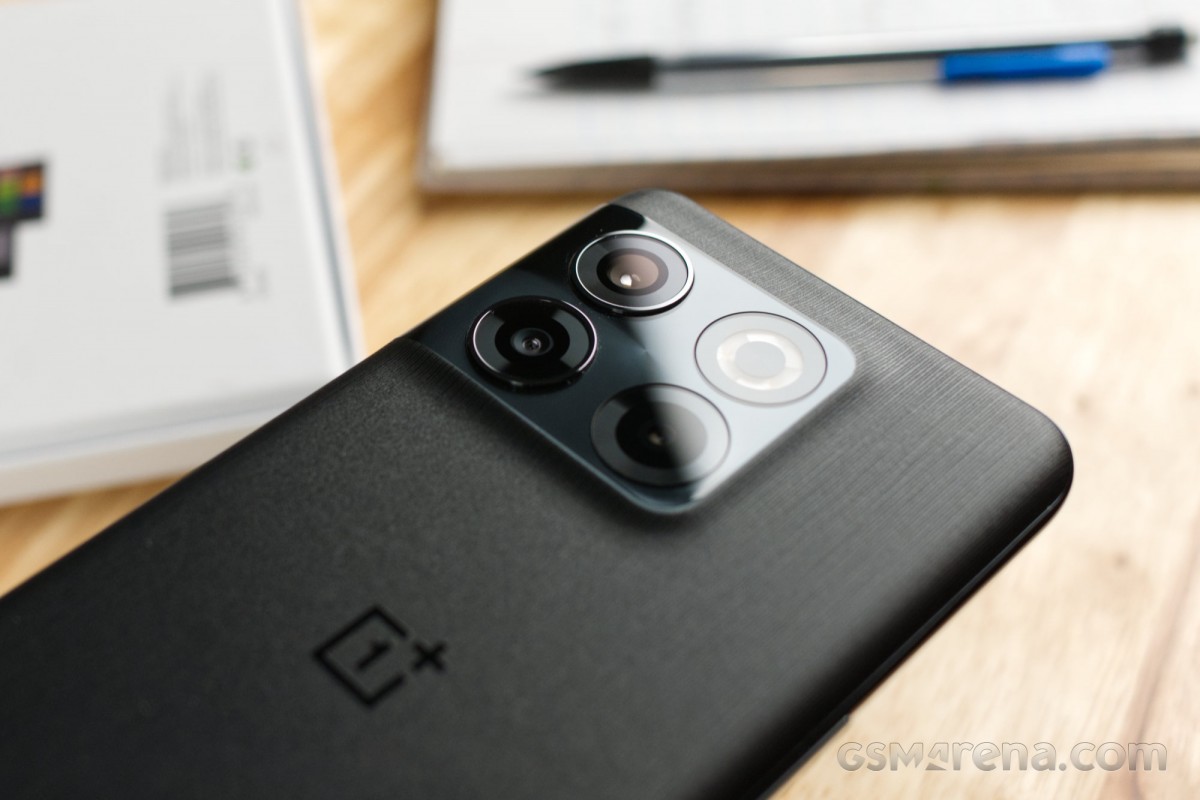 The other color is Jade Green, which has a smooth, ceramic-like finish thanks to a special film. While the color itself is fascinating, the finish is unremarkable, especially next to the Moonstone Black. And a downside of that smooth glass is that it also gets covered by fingerprints easily, although we found it took just one wipe to clean off.

The frame of the OnePlus 10T is made out of plastic. It features a glossy finish and color matched to the back of the phone. 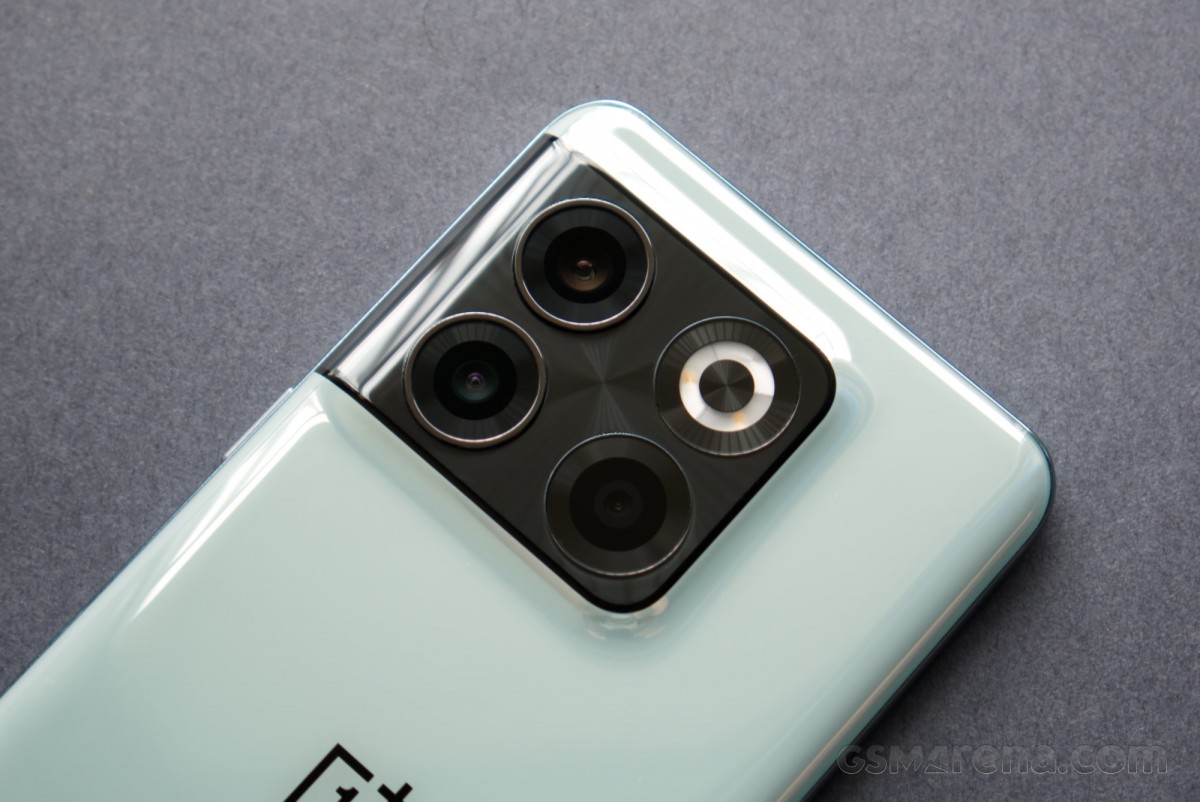 On the left side of the phone is the volume rocker and on the right is the power button. There is no alert slider that we usually see on OnePlus phones. OnePlus' reason is that they needed the space inside for things like high wattage charging, a large capacity battery, and better antenna signal.

OnePlus did however confirm to us that this does not mean that the alert slider is gone for good and it will return on future OnePlus devices. Not that it matters to potential OnePlus 10T buyers. 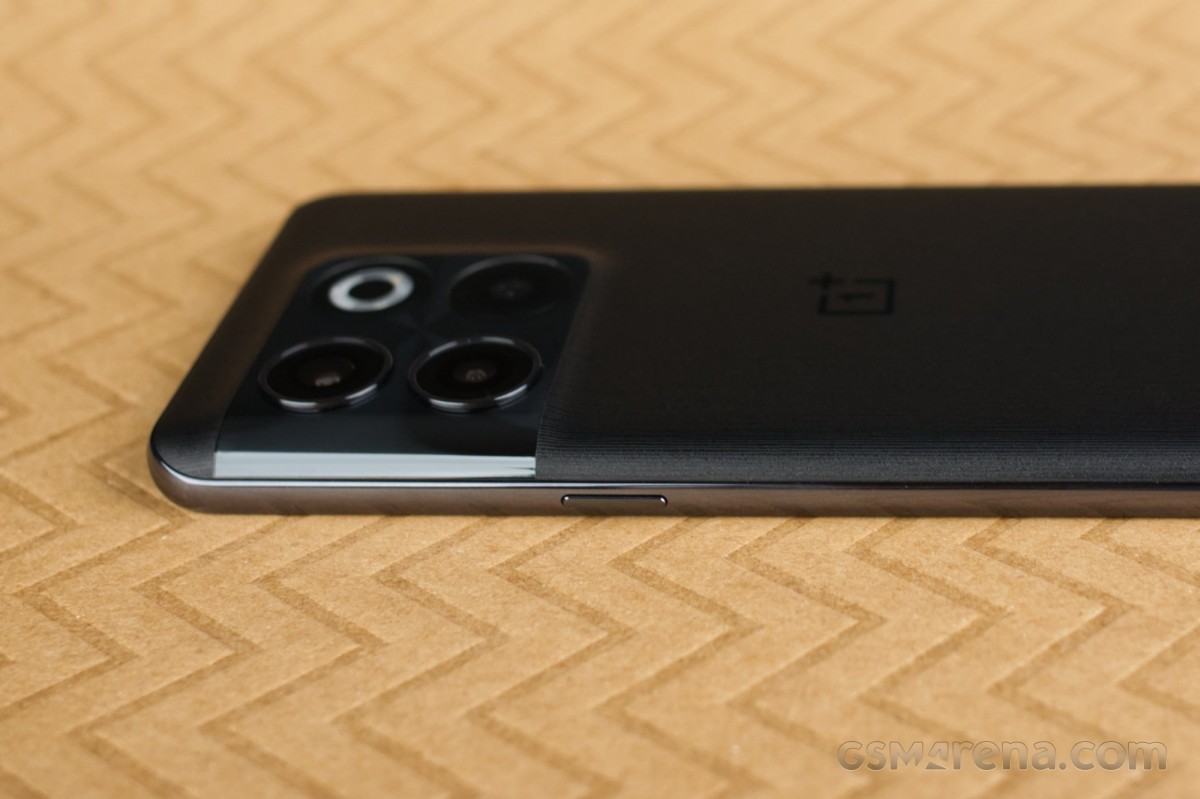 The front of the phone features a flat Gorilla Glass 5 panel with an edge-to-edge display. The display's bezels are thin all-around, and nearly uniform. The front camera is placed inside a single punch hole in the middle. The earpiece and other sensors are hidden in the top bezel. 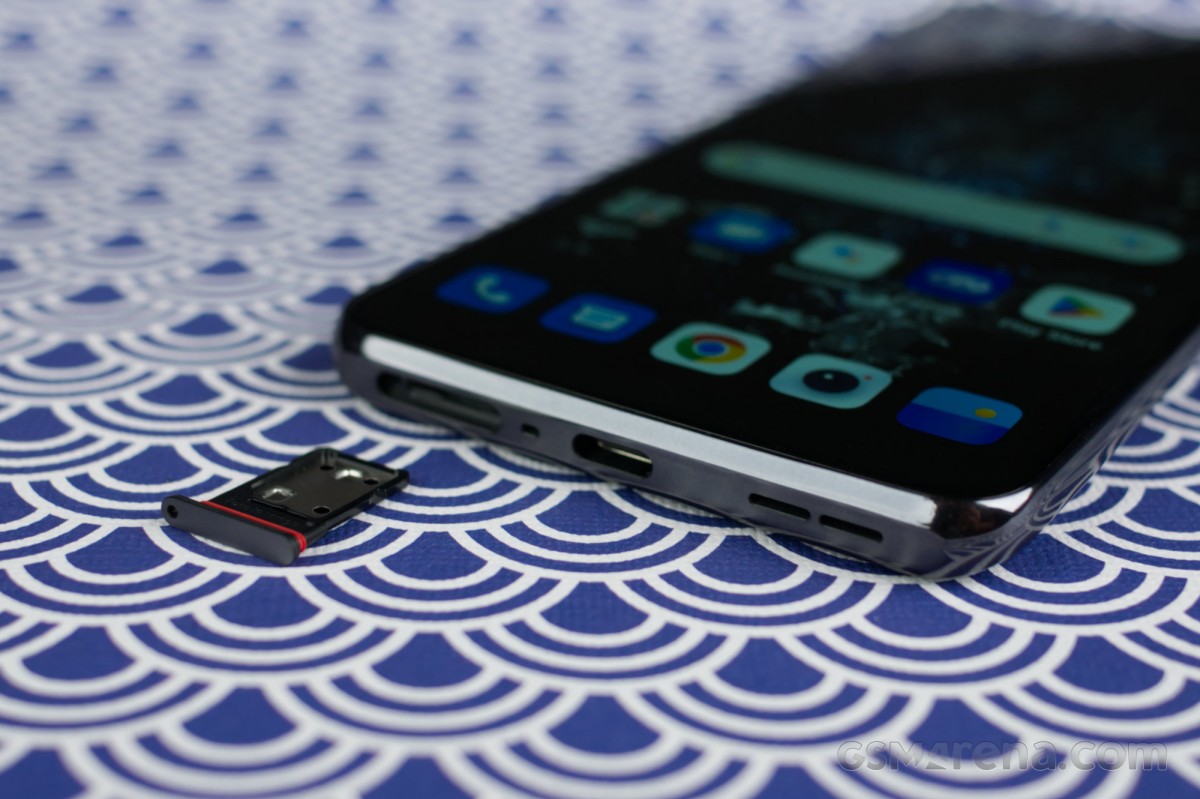 The OnePlus 10T is on the larger side. It's a bit larger than even the OnePlus 10 Pro and despite having a plastic frame and a smaller battery is also a bit heavier.

Unfortunately, OnePlus has once again cut corners and decided to skip an IP rating. We see basic signs of ingress protection, such as the rubber gasket around the SIM tray, but without a proper rating we have no confidence in the survivability of this device in wet or dusty environments. 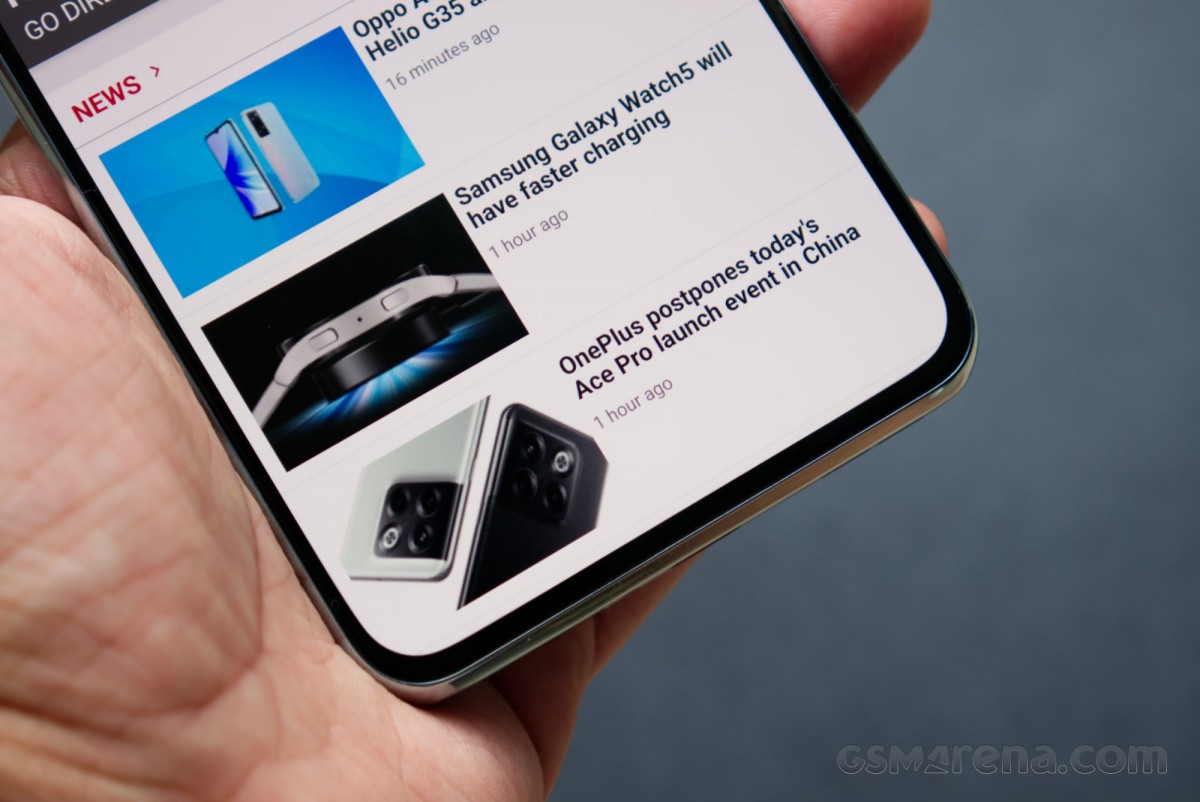 Overall, the OnePlus 10T wins a few points with the use of the unique glass texture on the black variant and a flat display but then drops the ball with a plastic frame, lack of IP rating, and the missing alert slider.

The OnePlus 10T has a 6.7-inch, 120Hz, 2412x1080 resolution AMOLED display. It is flat unlike those found on the company's flagship models, while still supporting 10-bit color depth. The coverage of the sRGB and Display P3 color spaces hasn't been specified but support for HDR has been confirmed.

We have not had time to run our complete suite of color checker, contrast, and brightness tests. However, in subjective tests, the OnePlus 10T display performed very well, with excellent color saturation, good brightness outdoors, and great viewing angles. We have no doubt the phone would excel our tests in our full review. 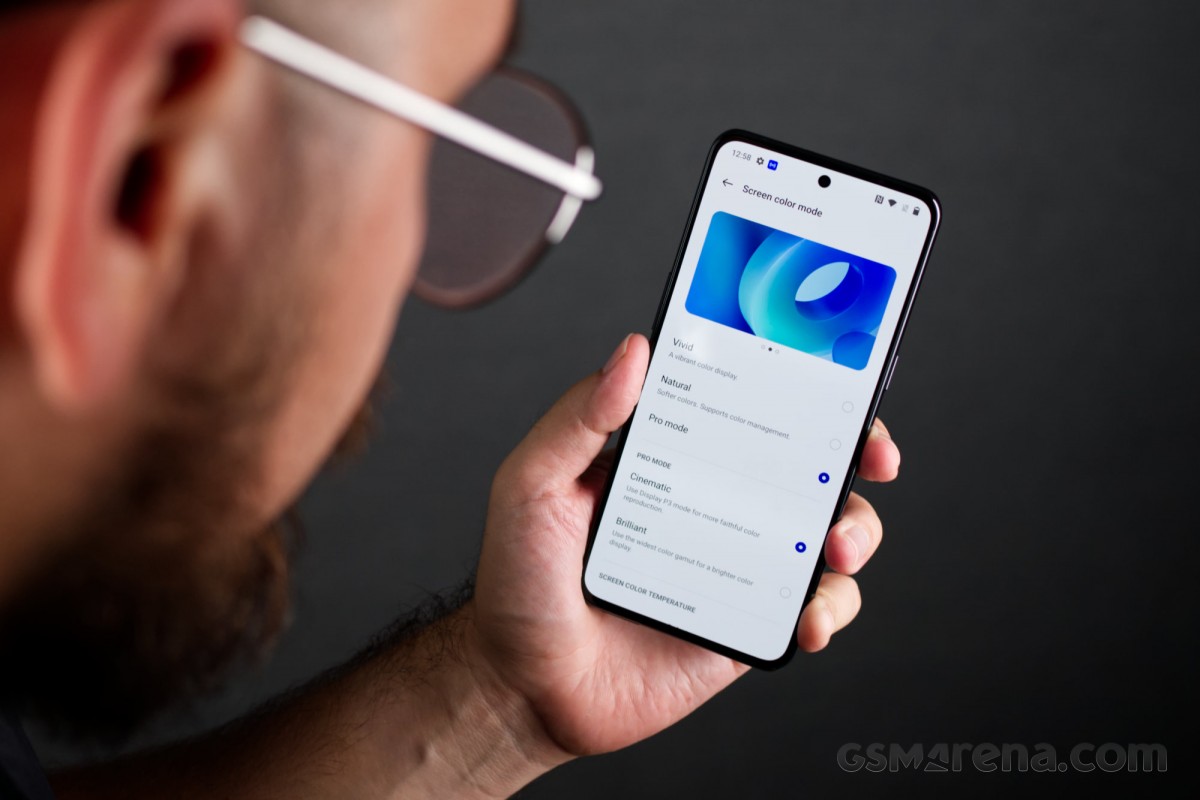 The display supports adaptive 120Hz refresh rate with optional 60Hz mode. When set to 120Hz, the display can drop down to 90Hz or 60Hz based on the content. Some apps will also lock the display to 60Hz, including video apps like YouTube and others like the Gallery.

OnePlus' logic here is, as usual, inconsistent as Netflix seems to work at 120Hz despite being a video app. Also, for some reason, all browsers are locked to 90Hz no matter what you do. The phone will also drop down its refresh rate to 60Hz when the keyboard is on screen. Then there's the issue with games, where most titles are still limited to 60Hz.

The phone supports HDR10, HDR10+, and HLG content. The built-in color management, Display P3 coverage, and 10-bit color depth ensure HDR content mostly looks like it should. There was also no sign of any dynamic tone mapping like we saw on the OnePlus 10R.

HDR content looks reasonably impactful, although that does depend on the mastering of the content. We see many complaints about HDR appearing too dark but that's only because cinematic HDR content is mastered for viewing in the dark on a large screen. If you want something with a bit more pop try watching one of the many demo clips on YouTube. 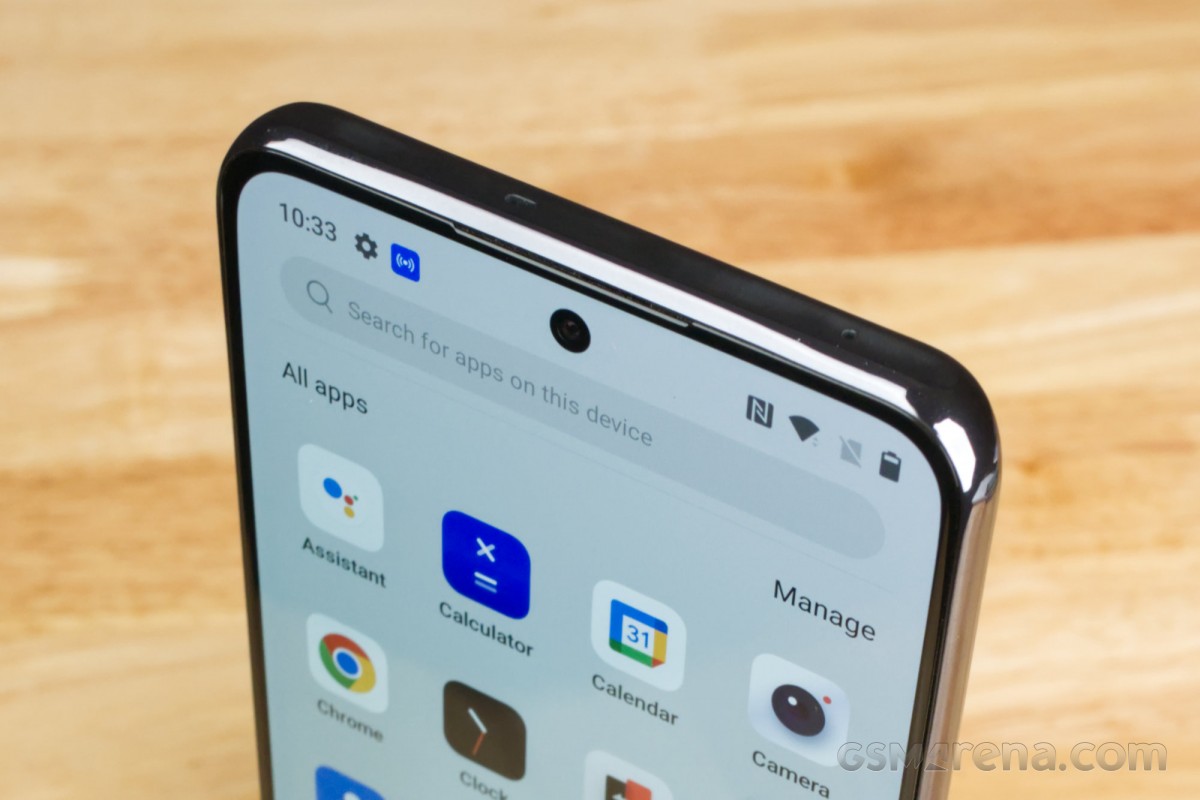 The display has a hole punch camera. By now we have mostly gotten used to these but it's easier to ignore when they are off to one side. The OnePlus 10T camera is right in the middle and also on the larger side so it ended up being more noticeable and distracting than usual.

To make sure the phone supports that kind of power without blowing up, OnePlus has designed a raft of safety features. The dual charge pump splits the 150W power into two 75W streams to charge faster and more efficiently. The VFC trickle charging optimization improves charging efficiency of the last 10% and reduces the time the battery spends at 100% to improve longevity. A customized smart charging chip can recognize input current and voltage and delivers an adaptable combination to the battery. 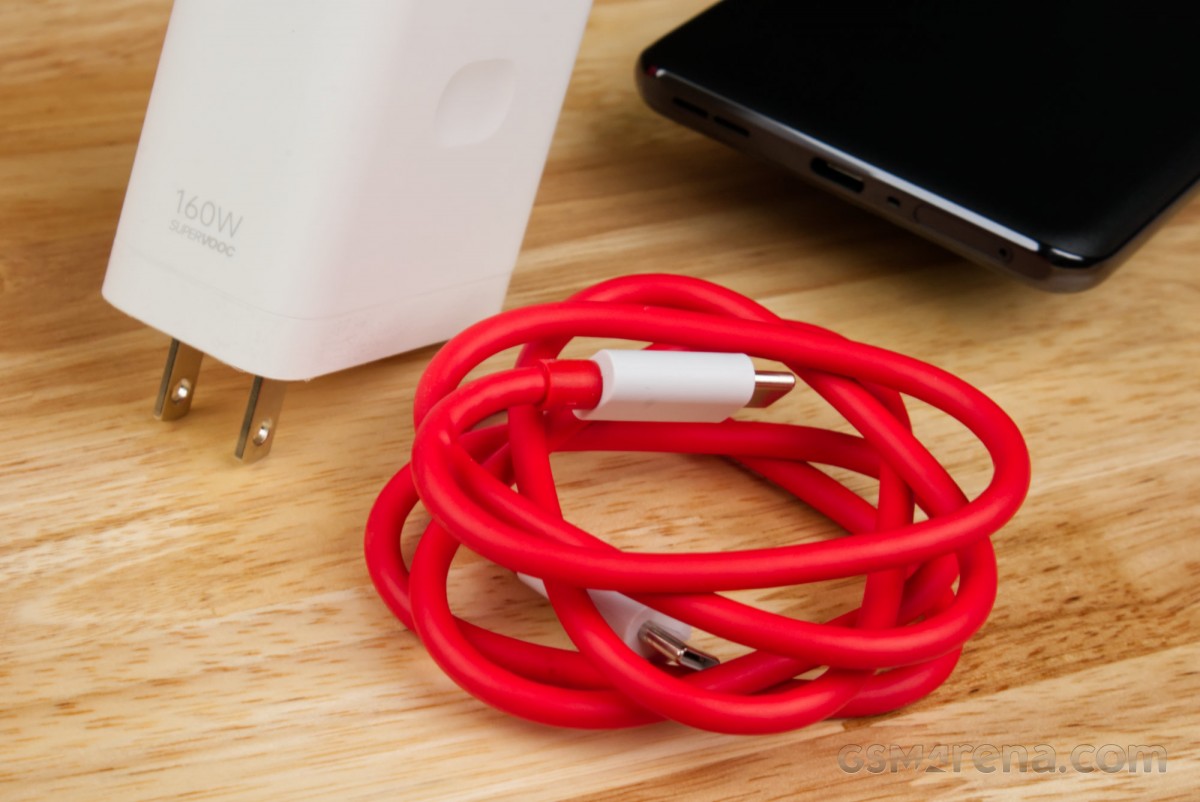 A new Battery Health Engine features a Smart Battery Health Algorithm that can track and control the maximum charging current and ensure it stays within a safe range to reduce the probability of dead cells. The Battery Healing Technology allows electrodes to be continuously repaired during charging cycles.

The dual-cell battery has a 7C rating and boasts a new multi-pole lug parallel structure process that reduces internal resistance of the cell and minimizes heat generation. There are also a total of 13 temperature sensors inside the battery system to monitor the charging temperature at all times.

OnePlus says the battery will retain 80% of its original capacity after 1600 charge cycles, which it says is equivalent to four years of usage. That number is a bit conservative even as that would even more than one full cycle each and every day. 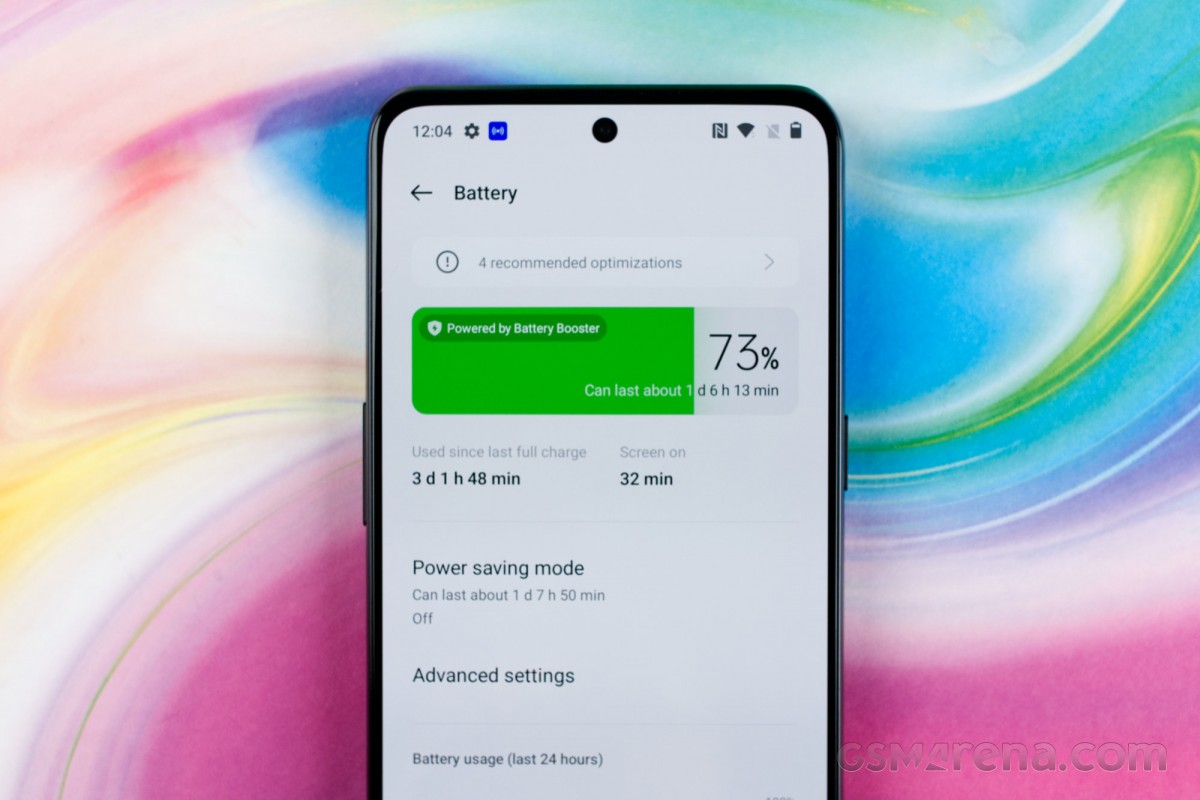 All of that is good to know but how fast does the phone charge? OnePlus claims the phone can charge 1-67% in 10 minutes, which was right on the money as that is exactly how long it took during our testing. OnePlus claims 1-100% takes 19 minutes and in our testing it actually took around 18 minutes. However, the screen flashing 100% is not the same as the battery being fully charged and the full charge takes another 4-5 minutes.

Even counting the extra time, the charging speeds on the OnePlus 10T are absolutely phenomenal and possibly the best feature of the phone.

Unfortunately, we did not have time to do our full battery life testing for this hands-on but it will be covered in our full review.

The new snapdragon 8 gen 1+ is much improved though and similar in heat generation and battery consumption when compared to the Dimensity 9000 series. Oneplus also has the Oneplus ace which is similar to the 10t camera wise but comes with the Dimensi...