The retail box of the OnePlus 5 is the same as the 3T's, which in turn was near identical to that of the OnePlus 3. Of course, there's now the digit 5 stamped on the white lid. There's an additional tagline promoting the dual camera on each side of the box, replacing the old make and model inscription.

The plastic cradle that the phone lies in is still here, and underneath it there's a cable and a charger, and nothing else. Both are special, though - together they enable the company's proprietary Dash charging which pumps up to 20W into the phone.

The charger itself is rated at 5V/4A - effectively feeding two sections of the battery simultaneously at 5V/2A thus keeping temperature low without sacrificing charging speed. That's done through custom pinouts of the ports, so Dash charging only works with OP's own accessories - replace one link in the chain, and you won't be getting any fast charging at all.

The OnePlus 5 measures 154.2 x 74.1 x 7.25mm and weighs 153g. OnePlus likes to point out that it's the company's thinnest phone to date, but the difference is just 0.1mm - talk about splitting hairs. It's also 5g lighter than the 3T. The outgoing model had 100mAh more battery, could that be the reason?

Put the 5 next to an iPhone 7 Plus, itself a 5.5-inch handset, and you'll appreciate that OnePlus hasn't done everything the Apple way. The OnePlus 5 is 3.8mm narrower (which does help single-handed use), 4mm shorter (mostly irrelevant), and 0.05mm thinner (ah, so that's why it's a big deal). More importantly, the OnePlus 5 is the substantial 35g lighter than the iPhone 7 Plus.

Would anyone really disagree if we called the OnePlus 5 an iPhone 7 Plus clone? Seriously, look at them. 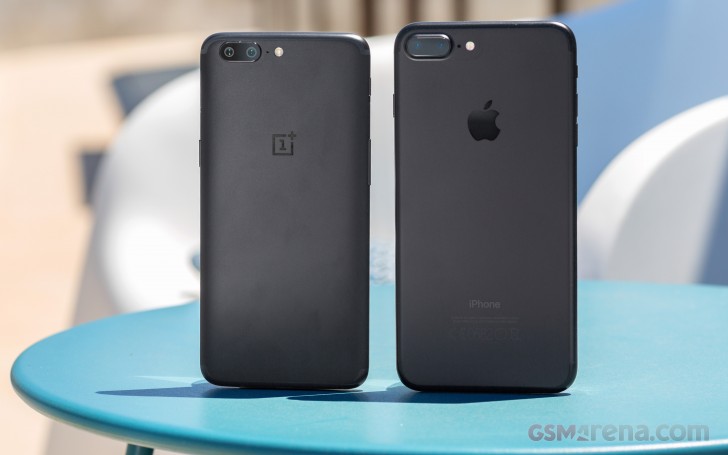 There are only so many ways you can make a black rectangle, we know that. But there must have been at least a couple of different spots for the noise canceling mic, right? We have no beef with the mic in particular, it just goes to illustrate the level of similarity between the two. Oh, by the way, the OnePlus 5's flash is a two-LED setup unlike the iPhone's four-LED one.

OnePlus 5 next to the iPhone 7 Plus

A 1+ logo is on the back of this one, of course, and the 5's rear panel is actually a touch more stylish than the iPhone's - other than the badge, there are no inscriptions. You know we're not huge fans of regulatory information and model numbers being part of the design.

The aluminum back panel has a smooth matte finish that picks up smudges like the next one of its kind. They are visible when you look for them though - not in-your-face like on glass-backed handsets. Like most smooth aluminum backs it's also very slippery - OnePlus sells a bunch of cases, the iconic Sandstone included, and you'd be better off getting one.

The dual camera forms a bump in the top left, its frame ever so slightly raised, so the phone doesn't rest on the glass. The 3 and 3T had Sapphire lens covers, but not the OnePlus 5. Thanks to the camera bump, the phone will wobble if you deliberately push it when it's lying flat on a table.

The antenna inlays are nearly invisible on our Midnight Black unit, and we imagine that this is more or less be the case with the Slate Gray paintjob too. The top antenna strip branches out towards the camera - it's a very thin line, but noticeable enough to aggravate a mild OCD.

On the front is another difference - the Home non-button isn't circular like Apple's TouchID - now that would have been begging for a lawsuit. Non-button, because it's a touch area (covered by ceramic at that), but not a physical button - just like on the OnePlus 3T, 3, and 2. That's one thing OnePlus didn't need to copy, they got it right two (and a half) generations ago. The 5 is missing Apple's super-localized haptic feedback, though. 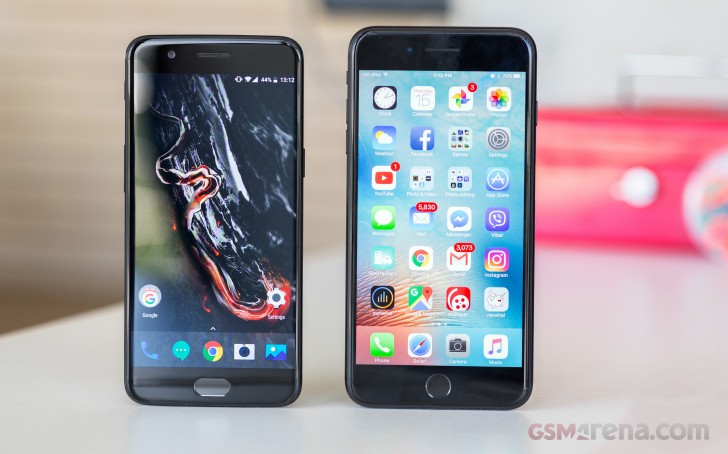 What it does have are two capacitive keys on either side of the Home key. They're backlit and customizable, so you can go for either Back/Home/Recents (the default Android behavior) or Recents/Home/Back (Samsung's way). Typically for OnePlus, the customization can go a notch further and you can have an onscreen nav-bar instead.

Above the display you'll find the usual stuff - the earpiece is in the center, the ambient light/proximity sensors right to its left. Midway between the earpiece and the edge is the front-facing camera, and a notification LED is placed further to the left.

5.5" AMOLED on the front • AMOLED gone • The usual stuff on top • Fingerprint reader/Home

Along the entire frame of the phone, a sharp line divides front from back - OnePlus calls it the Horizon Line. It's a nice design accent, and it makes the phone look thinner, particularly so in comparison to the chubby iPhone. The controls are also nicely worked into the Horizon too. 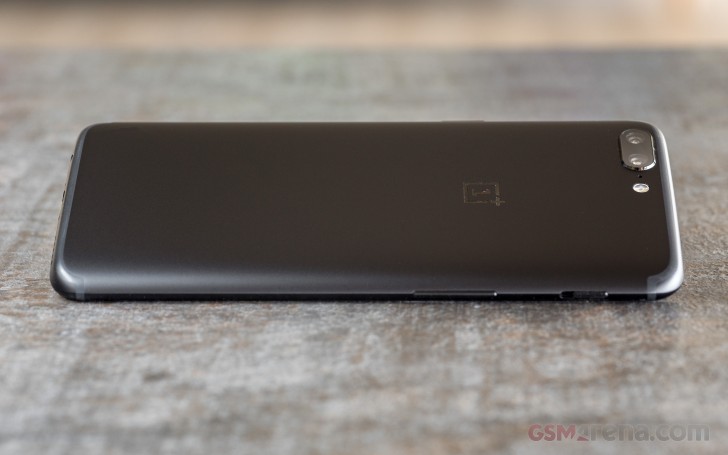 The power button is on the right side of the phone, equally convenient to use with either the right thumb or the left index finger. Above the button is the SIM card slot - the tray takes two nano SIMs and zero microSDs - there is no chance for storage expansion.

On the opposite side you'll find the volume rocker and also the Alert Slider. A rarity among droids, but a similar feature to Apple's mute toggle, this three-position switch cycles between Ring, Do not disturb, and Silent modes. 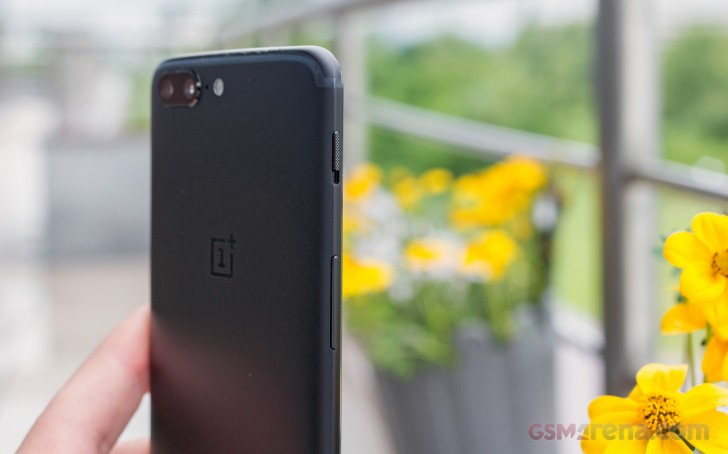 There's a lot going on at the bottom of the OnePlus 5. The USB-C port takes center stage, flanked by a couple of screws. OnePlus has moved them closer because their previous position towards the corners wasn't iPhone-y enough. Of course, other legitimate considerations may apply.

What isn't the least bit like the iPhone 7 Plus is the 3.5mm headphone jack - the OnePlus 5 has one, the iPhone doesn't, and we can only applaud OP for keeping it. The primary microphone and the single loudspeaker are nearby as well, while the top is kept nice and clean.

'Slippery' is the first impression you get when holding the OnePlus 5 - aluminum tends to do that to phones. Other than that, it's just like any other 5.5-inch handset - you may be able to make a phone call single-handedly, but for anything more serious the other hand needs to get involved.

Bought it July 2017 and stil working perfectly since day 1. Only the battery performance after five years is weaker (lasts little more than one day). Definitely my next one will be OnePlus again.

Touch pad not working. Need to sell this

When I bought my oneplus 5 it was cracked in the top left and I dropped it and had to pay £70 for the replacement led screen. Since then the screen is not very good as I have to press it a few times to get it to work and the Bluetooth range is ...