Several days ago a leaked image, comparing prices of different flagships, suggested $749 (around €610) price tag of the OnePlus 6 with 256 GB. Today more specs leaked, including the chipset, RAM storage, and dual camera setup. 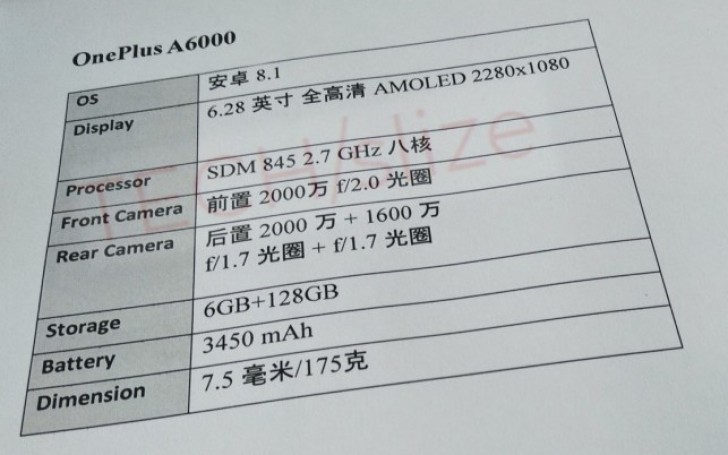 According to the listing, OnePlus 6 will sport a 6.28” AMOLED screen with a resolution of 2280 x 1080, which unsurprisingly is the same panel as on the Oppo R15. The SoC is expected to be Snapdragon 845, though, with its CPU clocked at 2.7 GHz.

The rear camera of the OnePlus 6 is listed as 16 MP + 20 MP with an f/1.7 aperture on both lenses, which is exactly the same setup as the predecessor OnePlus 5T. The selfie snapper has been boosted with a 20 MP sensor behind an f/2.0 lens.

Next to storage, we see 6 GB + 128 GB, which would be a combo we haven’t seen since the OnePlus 3T, introduced 1.5 years ago. OS is listed as Android 8.1, most likely with Oxygen OS on top (or Hydrogen OS for China-only devices).

Another similarity to Oppo R15 is the battery, listed as 3,450 mAh. Comparison between the flagships from the same conglomerate is not unusual - after all their predecessors Oppo R11s and OnePlus 5T also shared most of their hardware.

OnePlus has an update to enable HD streaming on the 5T, but you won't like it

Nice content very interesting and informative. You are doing a nice job...i love this site. you can view Top 10 website to watch telugu mp4 movies online thanks

Comparing with s9, s9 have far more better features like high res display.so many software features and hardware features, that is missing in this oneplus, still they are charging us premium amount.very costly. oneplus 5t itself very costly.nothing a...

All too expensive, when compared to Xiaomi Mi Mix 2s (SD845) and all that's missing is vanilla Android (on all. :))