OnePlus 6T is arriving in three weeks, but we already saw the CAD-based renders of the phone and know it's coming with in-display fingerprint scanner.

It is pretty much obvious the new phone will have Dash Charge like its predecessors, now we have the battery capacity, thanks to a leaked photo of the label on the power cell. It will be 10% bigger than OnePlus 6’s battery with a capacity of 3,700 mAh. 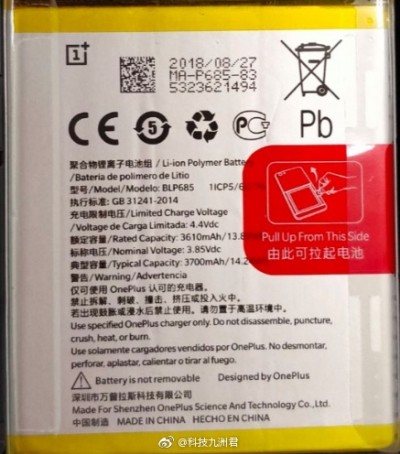 The leak comes from a leakster on the Chinese social media Weibo. It says the typical capacity of the power cell will be 3,700 mAh, but the rated is 3,610 mAh. Even though Oppo and OnePlus are part of the same conglomerate, it seems like the OnePlus 6T will stick to its regular Dash Charge (marketed as VOOC in Oppo devices), instead of going for the 50W charging solution, seen in the Find X Flash Charge Edition.

Other rumored specs of the phone include Snapdragon 845 chipset, 6/8 GB RAM and storage options between 64 GB and 256 GB. Since the OnePlus 6 recently got the Android Pie upgrade, we hope the OnePlus 6T will have the new OS out of the box. We are still waiting for a confirmation of the October 17 launch date where everything will be officially revealed.

Dude, 3T is a great phone. It'd be getting android P update by this year end. I'd suggest don't upgrade it. It's still good in 2018.

I read everyone justifying the removal of the jack for the bigger battery, but you guys realize that the Pocophone F1 has a 4000 mAh AND a headphone jack, right? I was waiting for the 6T to change from my 3T, but I guess I'll have to look elsewhere f...