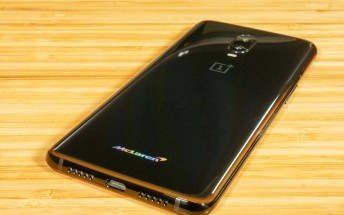 OnePlus announced the 6T McLaren Edition this week - in fact its most expensive smartphone ever. We've already unboxed it on video and gone hands-on, but now it's time for a different take on this device.

Our new video asks whether this is in fact better than a vanilla 6T, and will hopefully provide you with a non-black-and-white answer to that question. As usual with most things, it's complicated. The McLaren Edition does a lot right, but it could've been better and even, dare we say it, more exclusive and premium-feeling.

To find out why (and how), make sure to watch the video below. It's also packed with mini-rants for each of the things that differentiate the McLaren edition from any other OnePlus 6T, showing where the company went too far and where it didn't go far enough. So sit back, hit Play, and enjoy the ride!

This phone wasn't made for those already owning 6T's. It was made as another option to those on older or non-OnePlus devices. Every phone release isn't about the people that just bought the last namesake flagship device. Marketing a little more mu...

to release another 2017 chipset (845) in December 2018 is very poor marketing, especially for a phone that relies on a brand name known for fast sports cars. OnePlus gets a Minus for pushing out Old stock to customers.

OP 6/6T camera is good, mi8 camera advantage is less than 5%. I think the price hike is worth it, since it's a very small price hike, but the additional features are sensible.