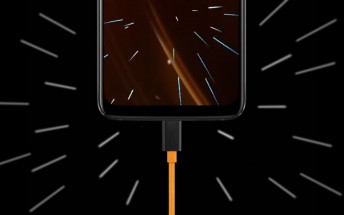 A OnePlus 6T McLaren Edition teaser claims that charging is about to hit warp speed. This is most likely a hint at 50W charging, which was missing from the spec sheet of the regular 6T.

Charging is about to hit warp speed. #SalutetoSpeed @McLarenF1 pic.twitter.com/hkIPXDb9ZX

So, youll have one more reason to pick the McLaren Edition over the regular OnePlus 6T other than the 10GB of RAM and 256GB storage. The companys current Dash Charge is no slouch at 20W, but with phones from Oppo charging at 50W and ones from Huawei at 40W, it was time for an upgrade.

PS. Did you notice that the cable is orange instead of the usual OnePlus red? And if you take a closer look at it, it looks like a braided cable.

OnePlus announces partnership with McLaren, schedules an event for December 11

I suppose. What phone do you have anyways?