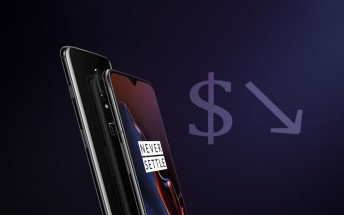 When the OnePlus 6T was unveiled, the older 6 remained available (still is in some markets), contrasting with the companys previous strategy of discontinuing the old model as soon as a new one comes out. Now the 6T itself is getting the same treatment.

Starting on May 17, OnePlus will reduce the price of the 6T by $30. Note that the base 6/128GB model is getting killed off, which will make the 8/128GB version the new cheapest option.

May 17 is, of course, also the first day of availability for the new OnePlus 7 Pro. By the looks of it, the OnePlus 7 will be available later. The 6T is largely similar to the OnePlus 7, though the new model gets the new chipset and storage (S855 and UFS 3.0), a 48MP main camera and stereo speakers.

iphone does that every year

The gave like 30 seconds of presentation on 6T. lol