OnePlus really scaled up with the 7 Pro. It feels like the company has matured to a fully realized flagship maker and the OnePlus 7 Pro really feels like a phone worth a thousand bucks. Although it's slippery and the thin bezels make more difficult to hold, it feels sturdy and well-built. The bezels themselves are very thin all the way around - the chin is the most prominent, but even that is thinner than the 6T's. 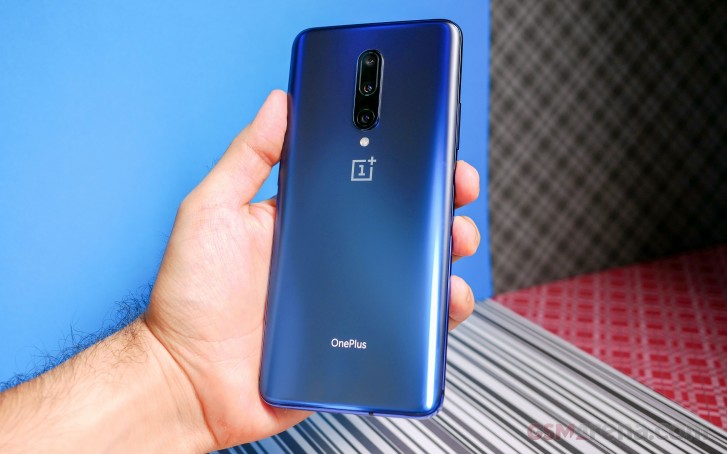 The top of the phone has a speakerphone slit and the pop-up camera eliminates the need for a notch or bezel. The proximity and light sensors seem to be embedded into the speaker grille or really close to it.

Both the front and rear panels are made of Gorilla Glass 5 and the rear one has a translucent, frosty finish that's a nice change from all the shiny glass we've been seeing. This glass also has a film underneath, which results in a cool reflection when you hold it up to the light. Our Aurora Blue model is a gorgeous gradient color that's mostly cerulean at the bottom and fades into indigo at the top.

The triple cameras are arranged vertically across the back and since two of them are optically stabilized, there's a slight camera bump. The "1+" logos and LED flash is placed behind the glass. 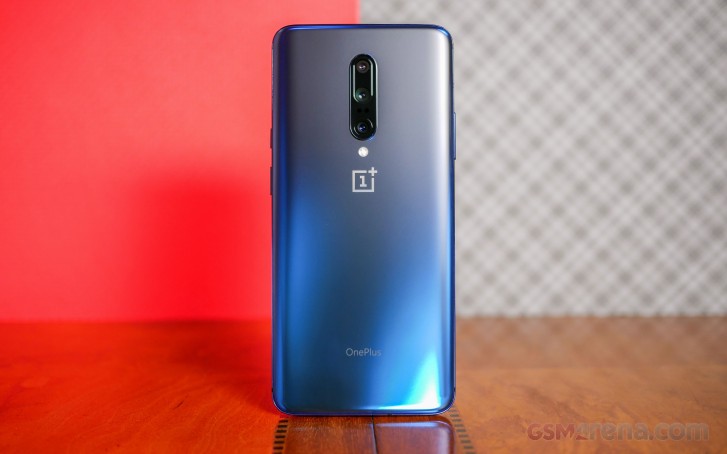 The frame is made of aluminum, but this one offers a well-polished finish, which contrasts beautifully from the satin finish of the glass. Even the frame's color fades from a light blue to black at the top, like the Thunder Purple version of the OnePlus 6T.

Since the display is curved along the two longest edges, these edges feel thin when you hold it. It's also a very slippery phone, so you'll want to use a case for it and one-handed use will certainly take a lot of practice unless you have large hands. 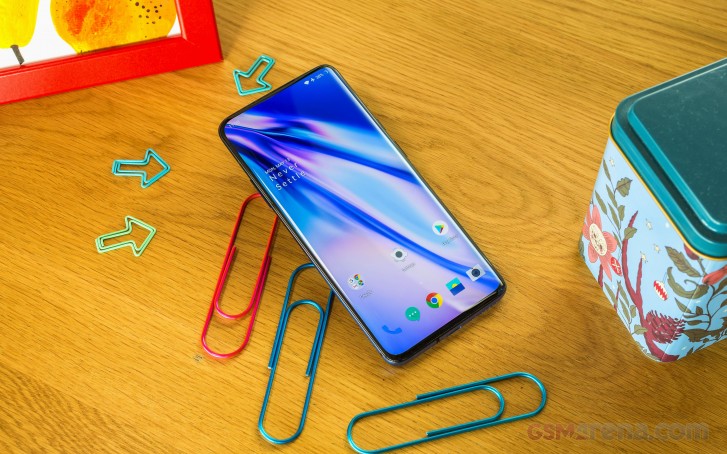 The left side has the volume rocker while the right side has the physical volume switch and power key. The physical switch really sets OnePlus apart from other phone makers since the only other company that puts them on phones is Apple. All the keys are firm and tactile so you shouldn't accidentally press them too often. 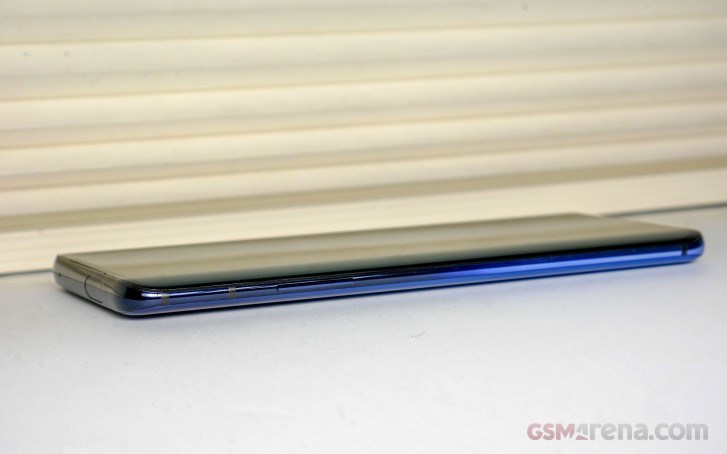 The underside has a USB-C 3.0 port, a speaker grille, in-call microphone, and the dual SIM tray. This dual SIM tray is a first for OnePlus. To save space, this tray is double-sided so you can place a nanoSIM on either side of it and slide it in for dual lines. The tray does not support expandable memory. 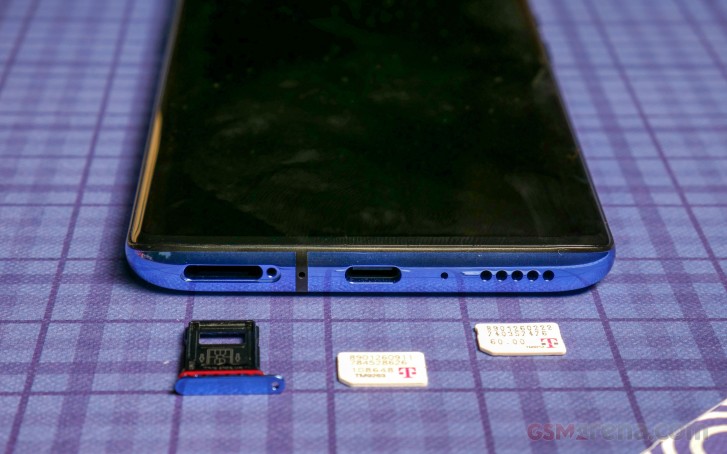 The top is now home to the phone's selfie camera. It pops up when you open the camera app (or any other app that fires up the selfie camera) and it's rated for 300,000 uses.

The phone will quickly retract the camera if it detects it's in freefall. If you push the camera in, it retracts the rest of the way in and warns you not to push it in. There's a quiet whine when the motor activates the camera, but it's nothing too distracting. 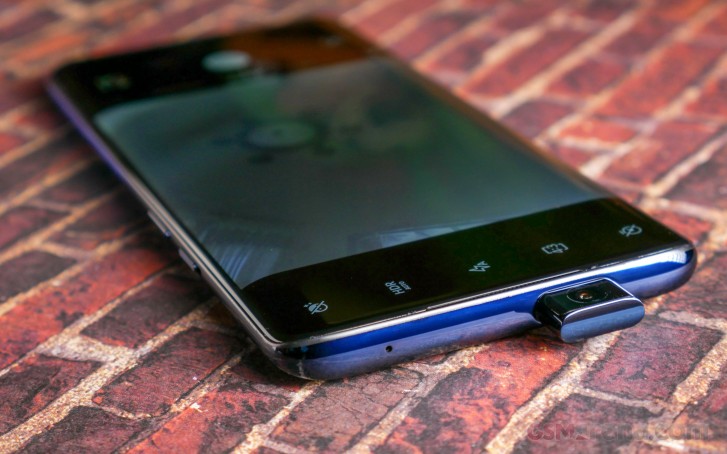 Now that the 7 Pro is significantly larger than the 6T, its size and weight potentially make it more difficult to use one-handed, forcing you to bring the other hand to help your dominant one more often.

As smartphones grow into the 6.5" size range, we wonder how much more they will push into what we consider tablet territory. 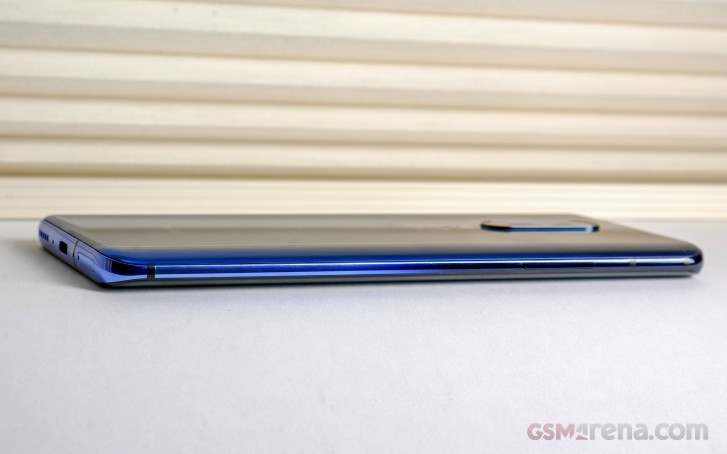 To this day, OnePlus remains the only modern smartphone brand next to Apple to have a physical notification switch (OnePlus calls it the Alert Slider). Switch between Ring, Vibrant, and Silent instantly without having to unlock your phone. You can find the Alert Slider on the right side of the phone, just above the power key.

OnePlus phones are worst, when we update the software patches phone will get start troubles and phone will working stop. Regarding this, if we ask support to OnePlus company simply says contact with service point. When we contact service point they s...