We are entering a slow season in which there aren't many new releases and while this may seem bad for some, it's actually a good time to reflect on what has been released since the start of 2019. It's also ideal time for some direct battles between the hottest flagships this Summer. Today's handsets under the spotlight are the runner-up OnePlus 7 Pro against the Samsung Galaxy S10+ - two large-screen, top-tier pro models that are definitely worth your attention and hard-earned money.

Why the OnePlus 7 Pro is the runner-up, you may ask. Well, even though before previous OnePlus devices were marketed as flagship killers, they always had to compromise on something to keep the price lower than your average flagship. "Bang for the buck" has always been an intrinsic value to OnePlus smartphones while the OnePlus 7 Pro is the first one to offer over-the-top features that you usually find in top-shelf smartphones. Budgeting isn't the main objective here and yet, it still undercuts the Galaxy S10+ and the rest of its competitors price-wise. 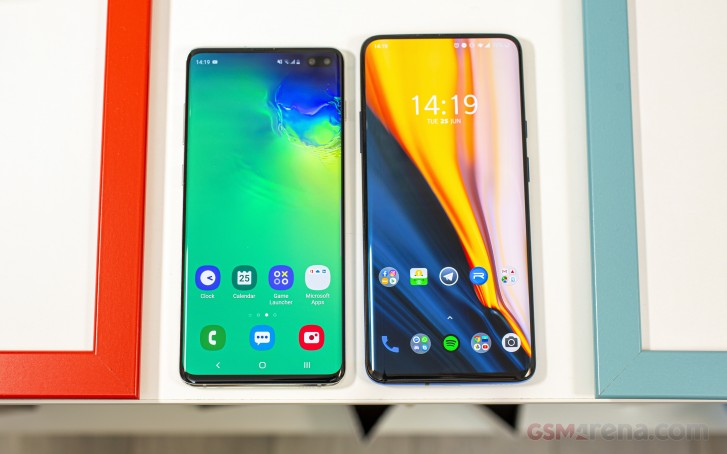 The Galaxy S10+, on the other hand, is one of the few zero-compromise flagships left around. It doesn't miss on some sought after features like proper ingress protection, microSD card support and audio jack. Things that the OnePlus 7 Pro is missing from its specs sheet. And for that, of course, Samsung is asking a price premium.

But as far as essentials go, these phones trade blows and check all the boxes. They both have big batteries, excellent large screens, powerful chips and versatile camera setups.

One thing that these phones do differently, however, is software. This is probably the main reason OnePlus fans keep going back to this brand. Slowly but surely OnePlus has established itself as one of the best software developers on the smartphone market by taking pure Android and tweaking only some of the things that really matter. And on the other side we have Samsung's brand new One UI that boasts simplicity and usability by applying a heavily-customized skin on top.

We will try to test how these phones go head to head in usual day to day scenarios and help you decide which one fits bets depending on your type of usage and priorities.

The s10+ is the obvious champion