The OnePlus 8 Pro is an absolute monster when it comes to the display specs. It's a 6.78-inch curved AMOLED panel with 3168x1440 resolution, 120Hz, 10-bit color, and HDR support. There's also a fingerprint scanner built-in along with a cutout for a camera. Even just three years ago these display specs would have seemed impossible but now we have all of them in one device. And you can use all of the specs too, and not like what Samsung did with its S20 and Note20 Ultra phones, where you can have either high resolution or high refresh rate.

Unsurprisingly, the display on the OnePlus 8 Pro is excellent. It's incredibly sharp, has great color accuracy, excellent viewing angles, and thanks to the 120Hz refresh rate, really low response times. Being an OLED panel also gives it some inherent advantages, such as high contrast and perfect blacks. 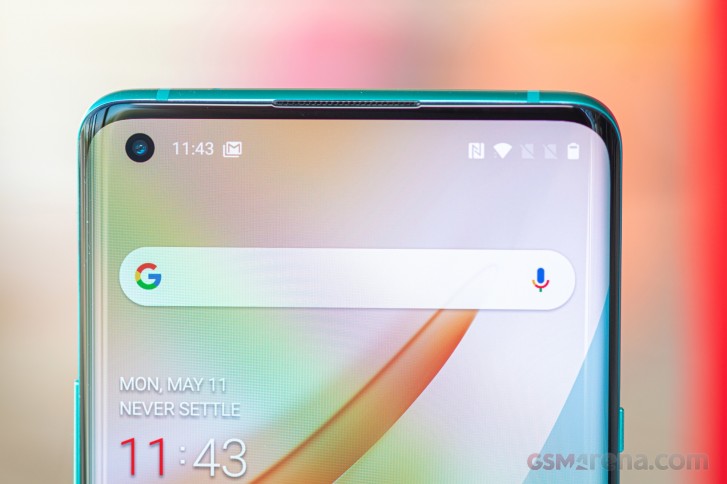 But this dream screen has a few issues, two of which were outlined within the specs at the beginning of this section. The lesser of the two is the hole punch for the camera.

Now, admittedly, we are somewhat ambivalent about this. It does intrude upon your content, which depending upon the content can be egregious or barely noticeable. It also pushes all the notifications on the side, which means there is less space for them. OnePlus has also placed the camera on the side and not the center of the display like Samsung, so you're never quite in the center of the frame unless you adjust the phone accordingly. Objectively, it is also a worse solution than the pop-up camera, which placed no intrusions upon the display and also added a layer of privacy.

On the flip side, this is one of the easier things to get used to. With a clever wallpaper and dark mode, the camera pretty much just disappears into the background, and the only time you'll notice it is when watching some fullscreen content or in a game. And if you don't see it all that often, you're rarely ever thinking about it. Over time, it's easy to get over it, and if you weren't bothered by it to begin with then it's even less of an issue.

The other issue is less easy to ignore and that is the curved edges. We have said this many times before but we aren't big fans of curved edges. This is a sentiment echoed by almost every reviewer and also many users but somehow every manufacturer who implements this has decided to turn a blind eye to those complaints so they provide the trendy look that probably attracts customers in stores. 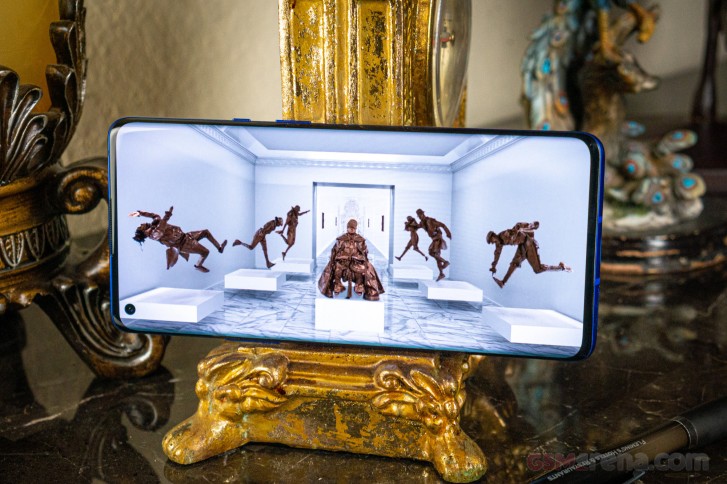 A curved display is once again objectively inferior to a flat display. The curve presents a multitude of issues. The most severe one is of accidental touches. Android has no palm rejection to speak of because somehow manufacturers learned how to bend screens before they learned how to make you not touch them when you don't want to. Accidental touches were an issue with the OnePlus 7 Pro a year ago and it's an even bigger issue now because the OnePlus 8 Pro has even more dramatically curved edges than its predecessor.

For anyone who hasn't used a curved screen for a considerable period, these are the sort of things you can expect to happen during a normal day. Holding a phone in your hand, if you try to reach for something on the other end of the screen with your thumb, you will either trigger something at the base of your thumb or when you do land your thumb on the thing you want, it wouldn't work because the screen is already detecting a touch elsewhere. You could be looking at a photo or a web page and try to scroll but instead of scrolling the image or the page will instead zoom because it detects another touch elsewhere on the screen where you are holding the phone and now thinks you're trying to zoom.

Now imagine you are trying to take a picture in the camera app. The edge of the screen will occasionally show that you tapped there to focus even though you are just holding the phone in your hand and can't help touch the screen. Sometimes, the shutter button won't work because the screen is already detecting a touch somewhere else.

After you went through all that nonsense in the day, imagine you are now in your bed. You are using the phone by holding it above your head while lying down, a pretty common situation. When in this position, you normally tend to grip the phone by its sides more firmly than when you are standing up, as those are the only two sides you can now use for support. Now imagine having to shuffle the phone around constantly in your hand or switch to a more precarious grip because the moment you grip the phone by its sides firmly the screen either goes haywire or you can't use it anymore because it's sensing contact at multiple points. 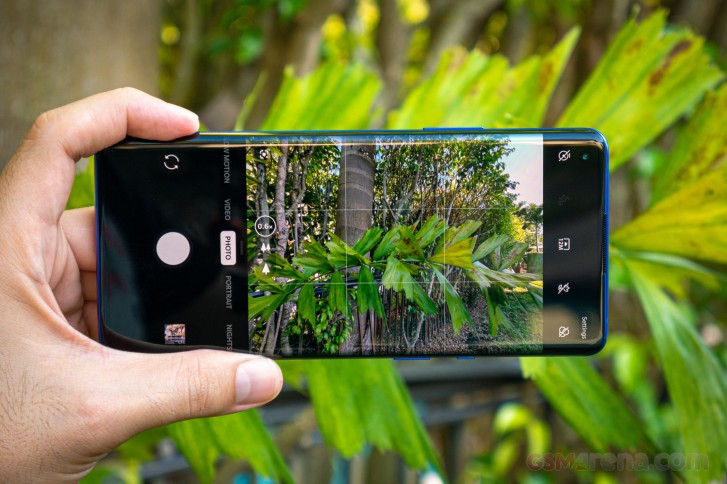 Curved screens also affect the image negatively. A not-so-insignificant portion of the screen is now bent away from you. The curve alone causes issues with refraction within the glass, giving the edge a darker, green tint, Then the curved area beyond the curve is just darker in general. The OnePlus 8 Pro display looks like it has vignetting around the edges. This means there is less usable display real estate than what is being advertised. The curved edges also tend to catch glare and reflections more often and the warping naturally distorts content.

Overall, this is a lose-lose situation for the customer. You may like how the curved screen looks on the phone when it's off but there's no denying there are disadvantages of having a curved screen vs a flat one.

The last thing we want to mention regarding the OnePlus 8 Pro display is less generalized and more device-specific. We have heard multiple reports so far regarding issues with the display on the OnePlus 8 Pro. These are quality control issues that range from color patterns to color tints. OnePlus has acknowledged these issues in the past and assured that it is working on them. Whether they have done so already or are still working on them is unknown.

For what it's worth, our OnePlus 8 Pro display is flawless, with none of the issues that the users have reported. Our review unit is sent by OnePlus but it is a final production unit. Whether or not this is a special cherry-picked unit for reviewers cannot be verified. At the same time, not every OnePlus 8 Pro user had this issue, so this is more of a luck of the draw situation and we could have just gotten lucky. 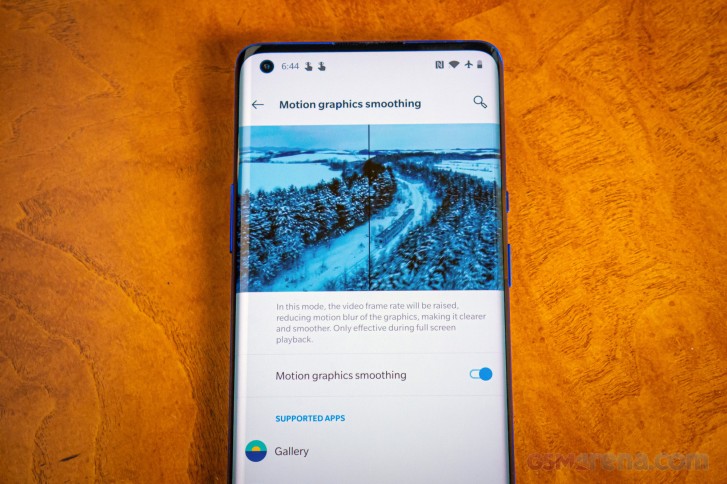 To prove that point, our OnePlus 8 and Nord displays do have an unusual issue that we haven't seen being reported by customers. Both those units tend to dim the screen slightly when the display automatically switches its refresh rate from 90Hz to 60Hz when not in use, a feature also on the OnePlus 8 Pro. However, while our OnePlus 8 Pro remains the same regardless of its refresh rate, our OnePlus 8 and Nord displays become darker when the display automatically switches to 60Hz and then gets back to normal when we interact with the screen and it goes back to 90Hz. We have brought this issue to OnePlus' notice but they are yet to get back to us.

We understand that it can be quite frustrating to have issues like this on a brand new device. It is especially serious now because these are no longer affordable, mid-range smartphones, at least not the OnePlus 8 series. Some of these issues wouldn't be acceptable on any phone. OnePlus clearly needs to work more on the quality control of its devices. Phones with displays like these should have never left the factory. The fact that they did means either OnePlus isn't looking carefully enough or has particularly low QC standards, and neither is a good position to be in. We hope the company considers these issues, offers a replacement for those who are affected and is more stringent with future launches.

Coming back to this phone after a year, I can really say that this phone has aged really well. Installing GCam would be a very great idea, and plus, this phone's display is still way more impressive than the iPhone 12 Pro Max's. I...