Launching at €599, the OnePlus 8T is shaping up as an excellent premium mid-ranger with a slew of flagship features - a 120Hz Fluid AMOLED, the latest Snapdragon 865 chip, a promising quad-camera with improved low-light performance, stereo speakers, and probably OnePlus best achievement yet - a larger battery with blazing-fast Warp Charge at 65W.

At the company's fall event this year, a Pro model was a notable absentee. This is because the company keeps the 8 Pro as its ongoing flagship device, and it won't be getting a refresh until 2021.

The OnePlus 8 needed the update, so we won't object to this strategic move. We doubt many OnePlus 8 owners are thinking of switching, but it makes the two current offerings that much more desirable for anyone in the market for a new phone.

If we compare it with the OnePlus 8, the 8T is getting a 120Hz OLED vs. 90Hz. At the same time, its main camera gets a brighter aperture for the main camera, an even wider ultra-wide lens, and an additional depth camera. Finally, you get a 4,500mAh battery with 65W charging vs. 4,300mAh and 30W charging. Okay, these are not the wildest upgrades we've seen, but for they are enough to make the cheaper OnePlus devices in the duo desirable again. 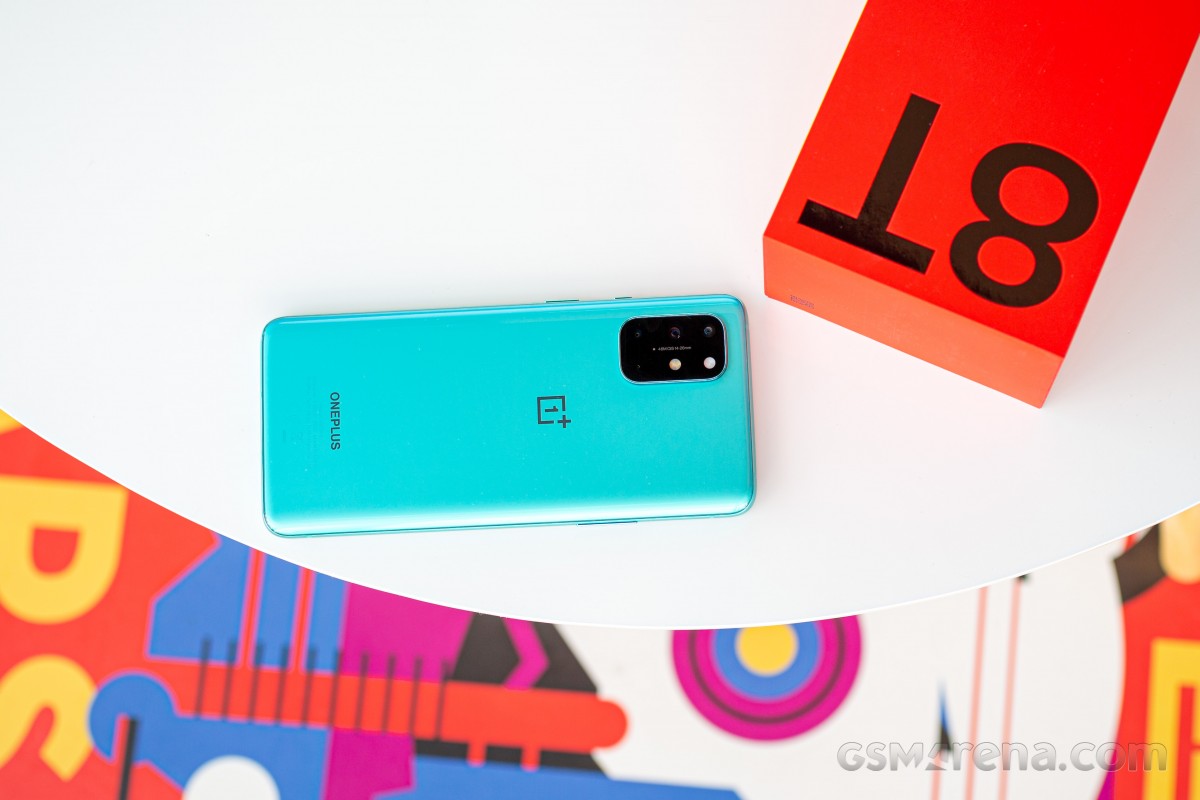 The €600 smartphone segment is already oversaturated, and it is the place where the flagship killers come to win big or die trying. With the OnePlus being the company that coined the term, its cheaper non-Pro models are burdened with the impossible task to defend the title. As long as they don't kill the company's own flagship, of course.

The OnePlus 8T is the first phone to come with the OxygenOS 11 based on Android 11 out of the box. Many of the recent OnePlus phones are getting the update, too, but being first is a title that only the 8T can claim.

Let's take a closer look at the specs sheet. There aren't many changes, but it is a flagship-like list, and we like what we are seeing.

The OnePlus 8T is not water-resistant, not unless you are getting the T-Mobile exclusive OnePlus 8T+ 5G model, which is the same phone but with IP68 certification. Don't sigh just yet - the OnePlus 8T does comes with many, if not all, seals and protections the T-Mobile model has. It will most probably survive a water drop, too.

The bright red Never Settle box is already here, and the excitement is building up. The OnePlus 8T may not be among the more interesting updates this year, but c'mon - look at this sweet reviewers' package! 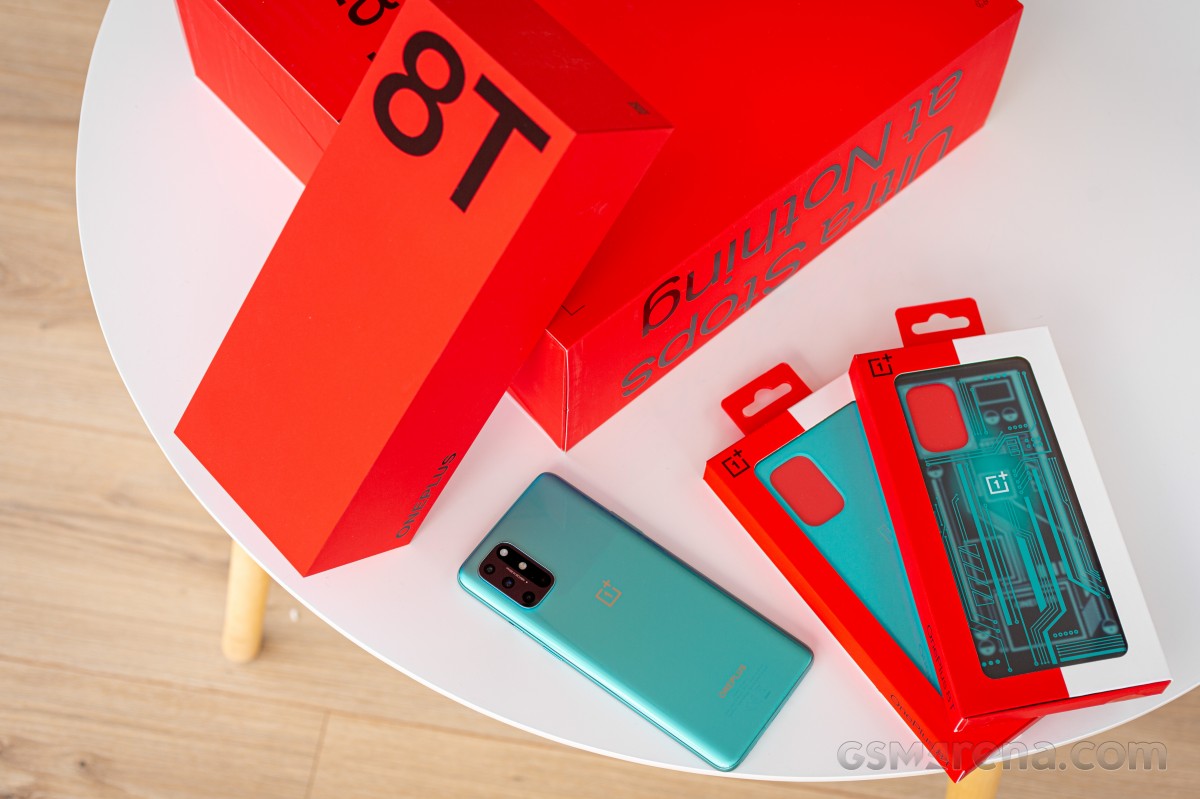 And now that you've seen what we got, here is what you are getting if you choose to buy the OnePlus 8T.

The OnePlus 8T comes packed in what's already a signature long red box. Inside, you will find your new 8T, be it the glossy Aquamarine Green or the frosted Lunar Silver, and a transparent Never Settle case. 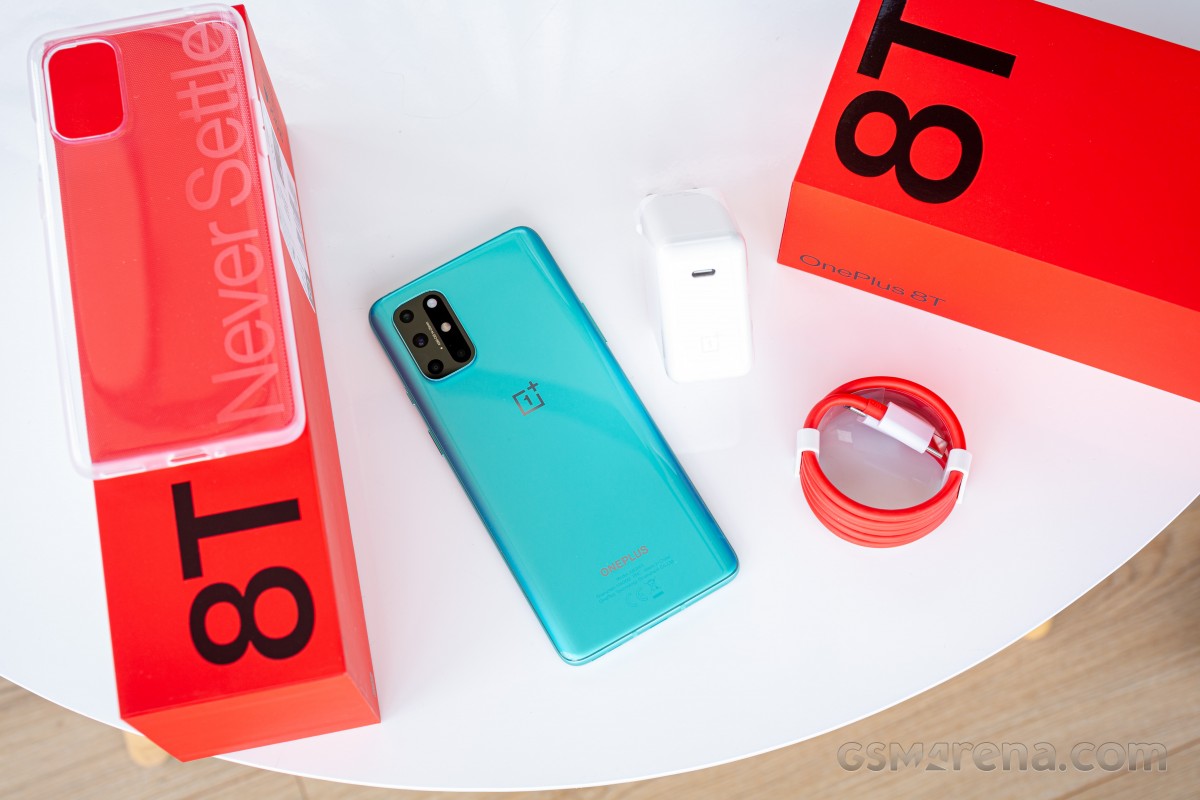 Digging deeper, you will also see the 65W Warp Charger and its thick and red USB-C-to-C cable. The charger also supports USB-PD, so you can use it to charge other devices such as laptops, consoles, tablets, and smartphones.

Finally, there is this paper compartment, where you'd find some paperwork and a bunch of OnePlus stickers.

Worst phone ever. Waste of money. I have been using this phone for about 14 months. Now the full height of left side about 1 inch width touch is not working. The service center person told to change the display about Rs.15,000 cost. Please don't...

Oneplus 8T has better display while the Realme GT Neo2 has better battery life. If you ask me to choose one, I will get the Oneplus because of better software optimization, longer software update (3 years vs Realme's 2 years), more useful camera...