The OnePlus 9 Pro has a 6.7-inch, 3216 x 1440 resolution, 10-bit LTPO AMOLED display. The display has a variable refresh rate that maxes out at 120Hz. It is capable of HDR (high dynamic range) and OnePlus has included support for HDR10, HDR10+, and HLG standards. 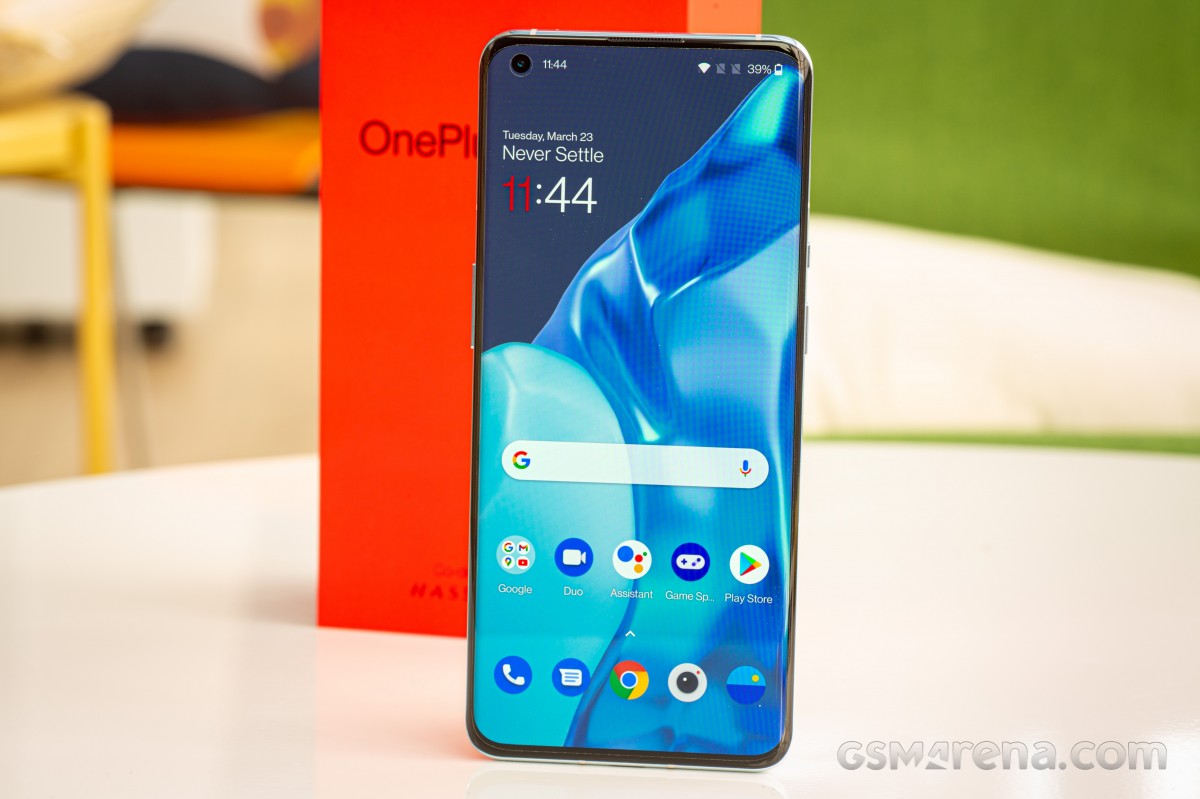 In our regular testing method for brightness, we use a pattern size of 75% but the OEMs are free to decide how they test their claims. Using a much smaller 15% pattern size, we were able to measure 1,150 nits of max brightness. Although not quite the advertised 1,300, not far from it.

For the sake of GSMArena's comparisons and the pattern size we use across all our device reviews, the 9 Pro's display reached a maximum brightness of 871 nits with Adaptive brightness switched on. With this setting turned off, the panel caps at 523 nits and these scores reflect the display's excellent sunlight readability.

OnePlus' default Vivid mode has pleasing colors and bright whites. This is the typical, punchy profile that most people will have on their device. If you're someone who would rather give your peepers a rest, or prefer something more accurate, OnePlus has you covered as well. 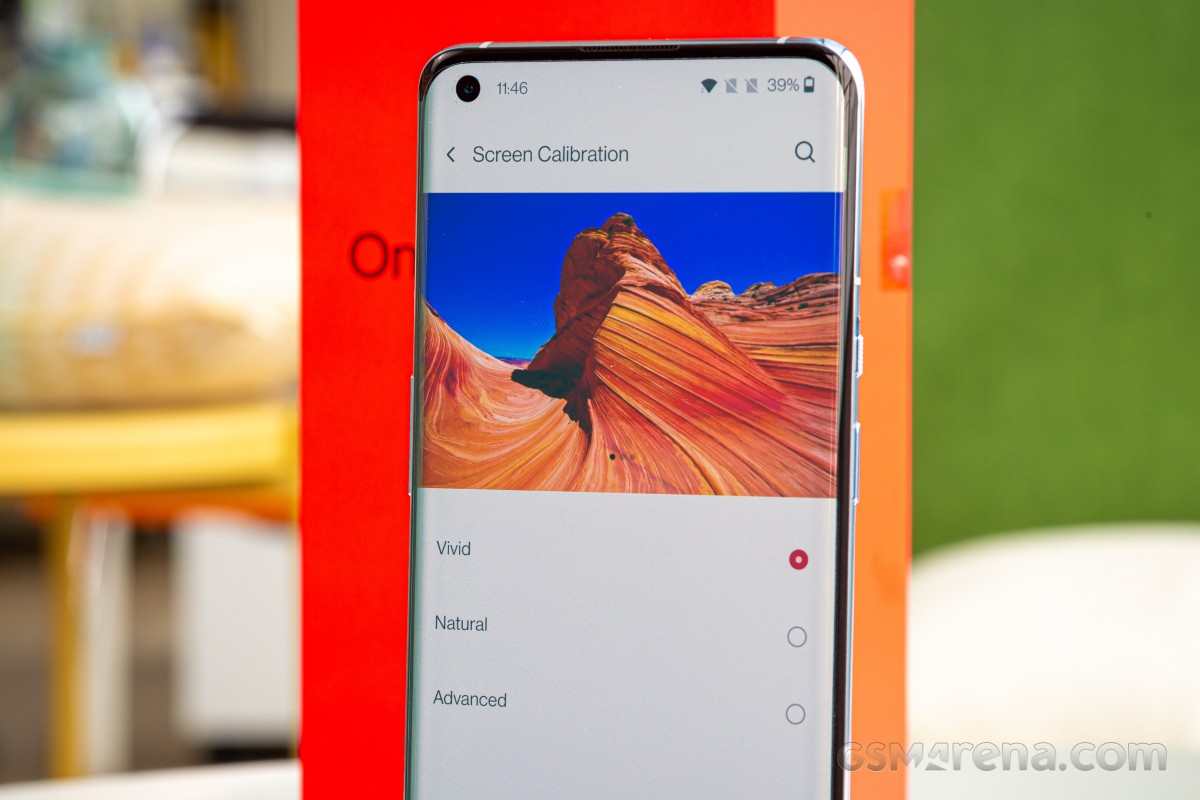 There are more profiles to choose from. Natural is closely related to sRGB, but not as color accurate. Under the 'advanced setting'. The AMOLED Wide Gamut is the most color-saturated profile for those who really want colors to look over-the-top and exaggerated. sRGB and Display P3 emulate the colors from their respective spaces. The latter three 'Advanced' profiles can be adjusted with sliders for warm/cool and green/magenta.

While the choice is entirely up to you, we think the Natural mode is the way to go as the device can automatically switch to P3 in applications that support it thanks to built-in color management in Android.

The variable refresh rate is an interesting topic. The display on the 9 Pro (not the vanilla) uses a new LTPO (low-temperature polycrystalline oxide) backplane in the panel that can dynamically adjust the display's refresh rate and scales power. If you're watching a 24fps video, the display will refresh at 24Hz and can go as low as 1 Hz when viewing a still image on screen. Once you touch the screen and start swiping around, the rate kicks back up to 120Hz.

OnePlus advertises a maximum figure of 120Hz but the display also supports intermediate values like 90Hz, 60Hz, and supposedly even 1Hz, and can adjust based on the content. When set to the 120Hz mode, the device will be constantly adjusting the refresh rate, and there's no easy way for the user to just lock it to 120Hz.

Unfortunately, we were unable to verify OnePlus' claims of 1Hz refresh rate mode. With the tools we have at our disposal, we are unable to confirm or deny that the display is doing this. Our skepticism reflects later in this page, in the battery endurance section. 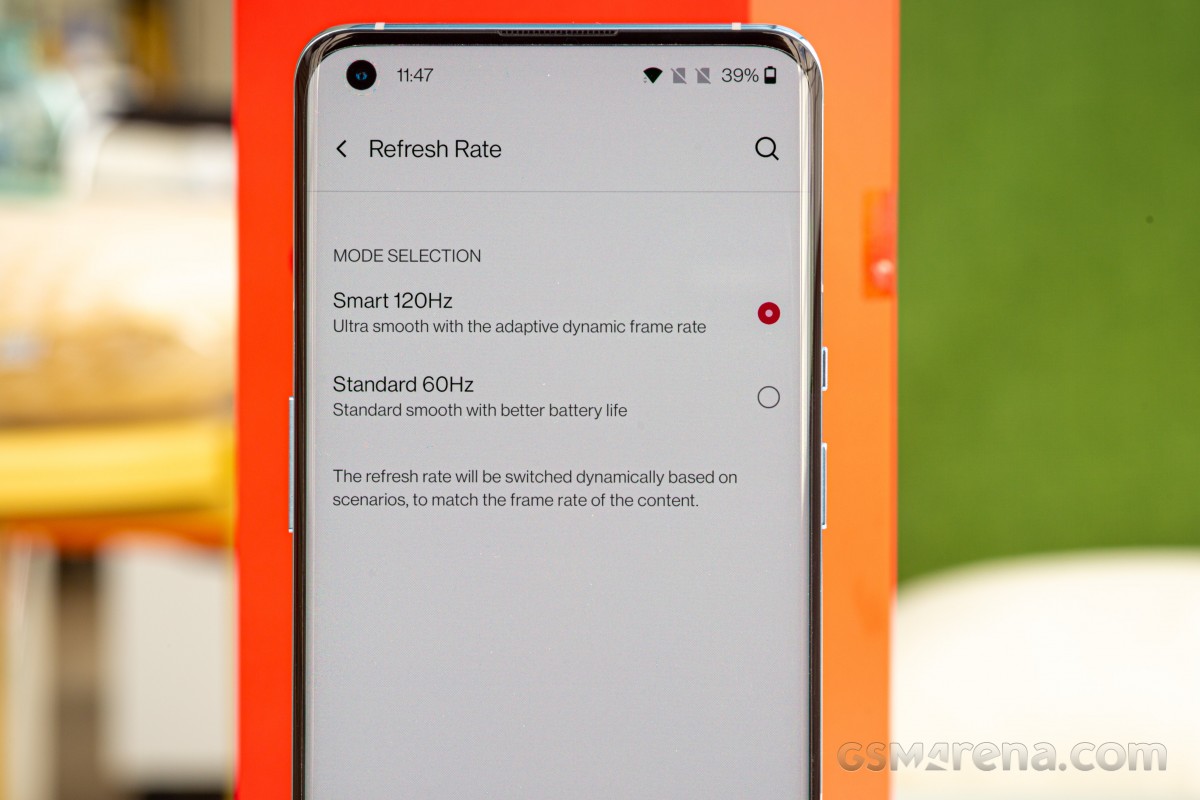 Perhaps more frustrating is OnePlus' continued lack of support for high refresh rate gaming. The company has whitelisted a very small number of games, such as Fortnite, PUBG Mobile, Pokemon Go, etc., and these are the only titles allowed to run at a maximum of 90Hz. This leaves a vast majority of games unsupported and there are also no titles that run above 90Hz. Moreover, OnePlus will also drop down the refresh rate of the display from 90Hz to 60Hz in supported games when the player stops interacting, which causes a jarring drop in fluidity because, unlike static UI screens, games tend to have moving elements on-screen animating at the display's refresh rate.

OnePlus has also added a feature they call Hyper Touch, which boosts the touch sampling rate to 360Hz. While the feature has to be manually enabled from the display settings, it currently only works in select games, including PUBG Mobile, Call of Duty Mobile, League of Legends: Wild Rift, and Brawl Stars. We played Call of Duty Mobile with the Hyper Touch mode enabled and didn't notice any improvement in the touch response. This shouldn't be surprising as increased sampling rate can only do so much and if your game is still running at 60Hz, you're not going to notice much of a difference.

There's also a new Ultra-high video resolution mode, which at the time of testing was only available for Instagram. This feature uses AI to add edge enhancement to videos within supported apps. Tested videos on Instagram had more pronounced detail but it does tend to look a bit artificial. 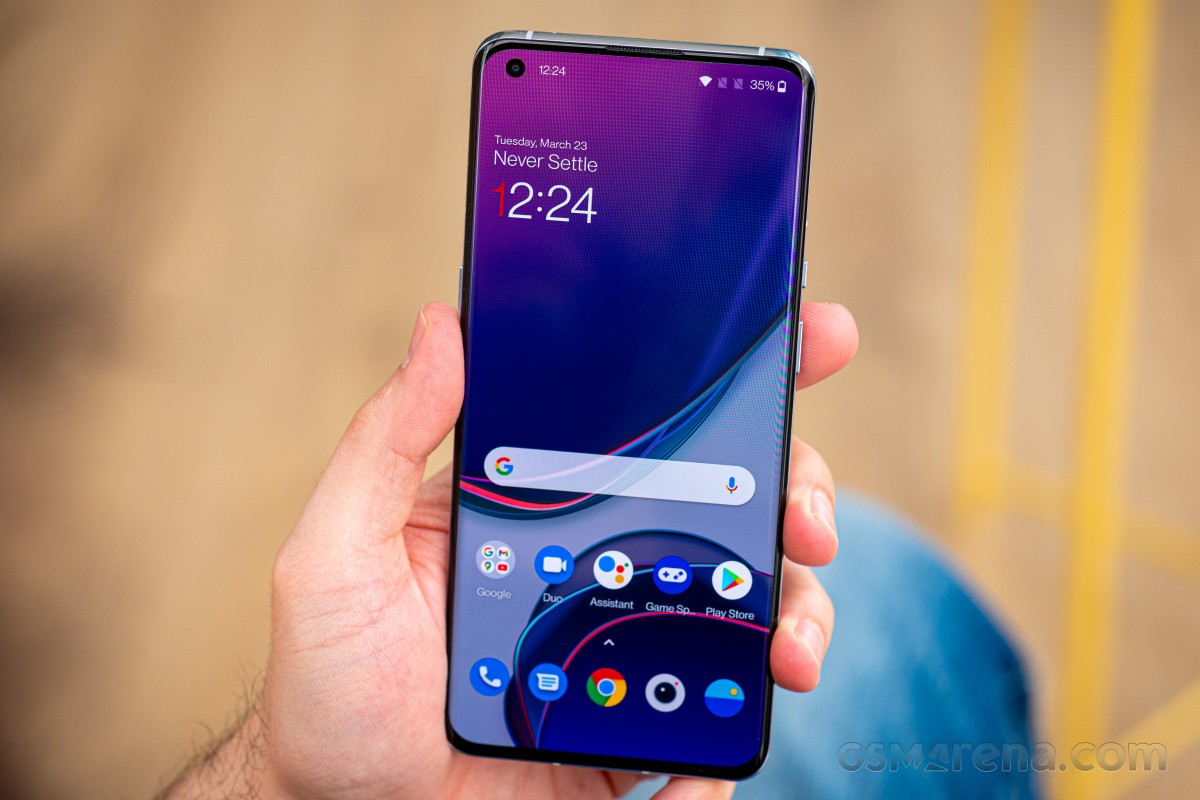 The OnePlus 9 Pro also supports the Motion graphics smoothing feature found on previous models, which uses a motion compensation algorithm for frame interpolation. The purpose of this feature is to make low frame rate videos appear as if they are high frame rate. In our opinion, this feature does more harm than good, especially when used on cinematic content, which is intended to be viewed at a certain frame rate as that's part of its aesthetic. By increasing the frame rate, the video tends to appear unnaturally smooth, which ruins the creator's intent. Moreover, no motion compensation algorithm is perfect, so you'll still see plenty of motion artifacts, which further destroys the image quality. We strongly advise leaving this feature disabled.

The OnePlus 9 Pro display has great HDR performance. We tested some HDR10 content in the YouTube and Netflix apps and noted improved overall brightness over the OnePlus 8 Pro. The specular highlights can get much brighter on the newer model, which produces a more impactful HDR experience. The OnePlus 9 Pro display can also reproduce detail in the shadows better before clipping to black. Being a 10-bit display with full coverage of the Display-P3 color space also means you are seeing the full breadth of colors that HDR content can have. 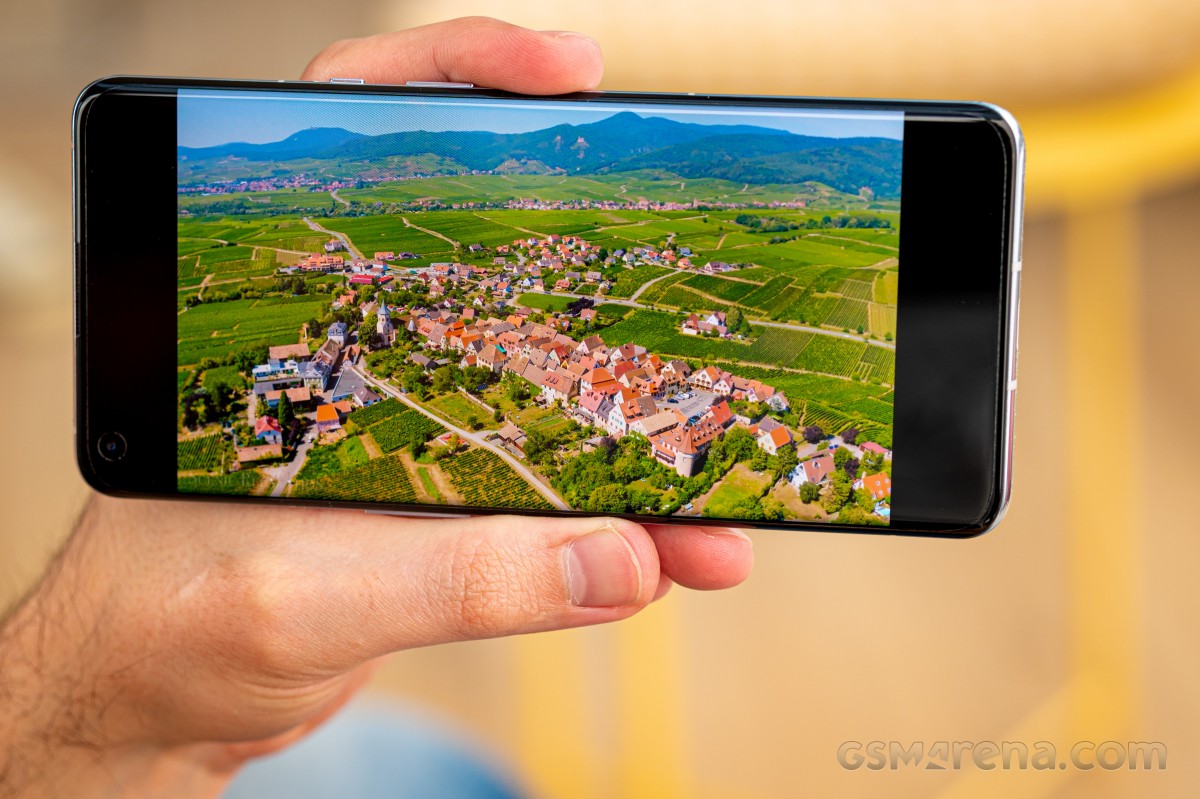 Like we mentioned in the design section, we're glad to see that the curvature of the edges of the glass were dialed back this time around. OnePlus has opted for a less aggressively curved display this time around. Compared to the OnePlus 8 Pro, the OnePlus 9 Pro display has much less vignetting around the edges, although it's not completely gone. The new display also catches less glare around the edges than the older one.

The 9 Pro display has fewer issues with accidental touches but it's still present. This means there will still be times where you can trigger the touchscreen simply by holding the phone. This happens most commonly while using the camera when you're holding the phone by its edges. If Android manufacturers are going to insist on having curved displays, the least they could do is also implement better palm rejection.

The OnePlus 9 Pro uses dual 2,250mAh cells that equate to a total battery capacity of 4,500mAh. It's roughly the same capacity as the OnePlus 8 Pro that came before it. Despite the Qualcomm Snapdragon 888 platform, LTPO display, and OnePlus claims of better battery life, the OnePlus 9 Pro's battery performance was only average this time around. 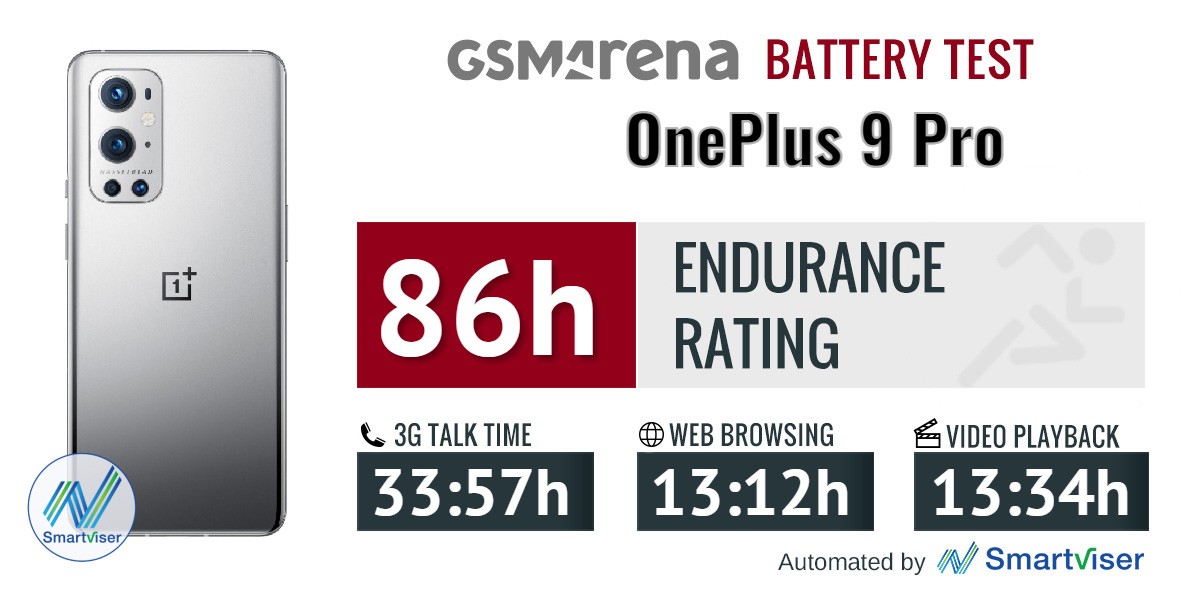 We saw a higher 3G talk time score that totaled 33:57h. The web test did get a bump up in endurance at 13:12h, but video playback took a large hit that resulted in just 13:34. This, accompanied by the Snapdragon 888's poor standby score resulted in a significant slip in overall endurance compared to its antecedent. In reference with the other 888-powered phones, the OnePlus 9 falls right behind the Xiaomi MI 11 (score 89h) and ahead of the Oppo Find X3 Pro (score 81h).

We were under the impression that we'd see better scores in the screen-on tests than what we saw with the OnePlus 8 Pro, we are wondering whether the LPTO panel is working as advertised. Unfortunately, we are unable to confirm or deny this, as the FPS counter that's built into the Android Developer tools is not yet compatible with the LPTO tech.

The 4,500 mAh battery on the 8T, 9, and 9 Pro all use identical dual-cell battery tech. This means that the adapter is simultaneously fast-charging two batteries that work as one. OnePlus debuted 65W charging with the OnePlus 8T, but the 9 Pro gets a bump up in charging speed with Warp Charge 65T. The 9 and 9 Pro received improvement that "reduces internal charging resistance", according to the company, so the battery can receive high wattage for a longer time before dialing its voltage back down.

With Warp Charge 65T, the 9 Pro's battery was fully replenished in 31 minutes, 2 minutes short of OnePlus' promised 29 minutes. The OnePlus 8T can fully recharge in 39 minutes so the improvement is marginal, but still impressive. 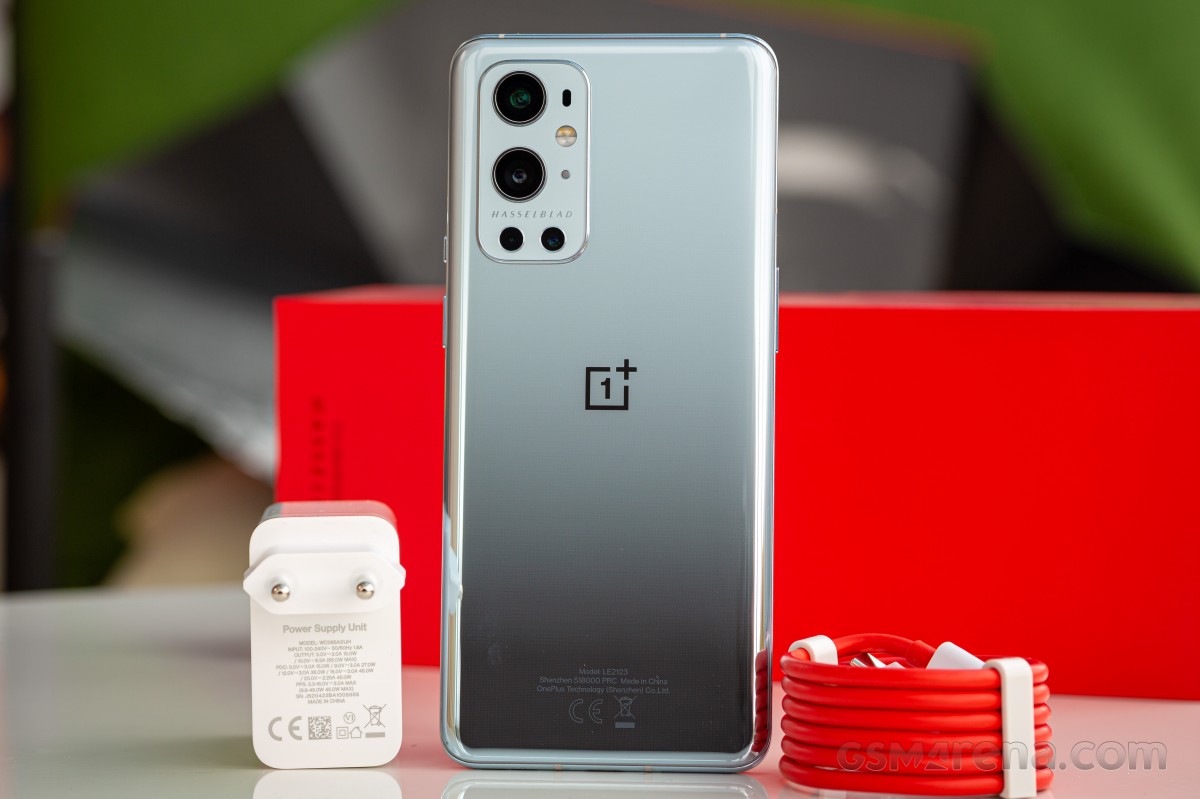 Wireless charging sees a significant update with the 9 Pro. The company debuts a faster Warp Charge 50 Wireless Charger that delivers 50W of peak power to the phone. This comes as an update to the Warp Charge 30 Wireless Charger that launched with the 8 Pro. That charger didn't have a removable charging cable so it made it more difficult to replace the charging cable without buying a whole new charger. It also made cable management more difficult.

This time around, the Warp Charge 50 does not have a permanent wire on it. Instead, it requires that you use the Warp Charge 65T charger brick that comes included with the 9 Pro. Though it doesn't include an adapter, the wireless charger comes with its own USB-C to C cable. 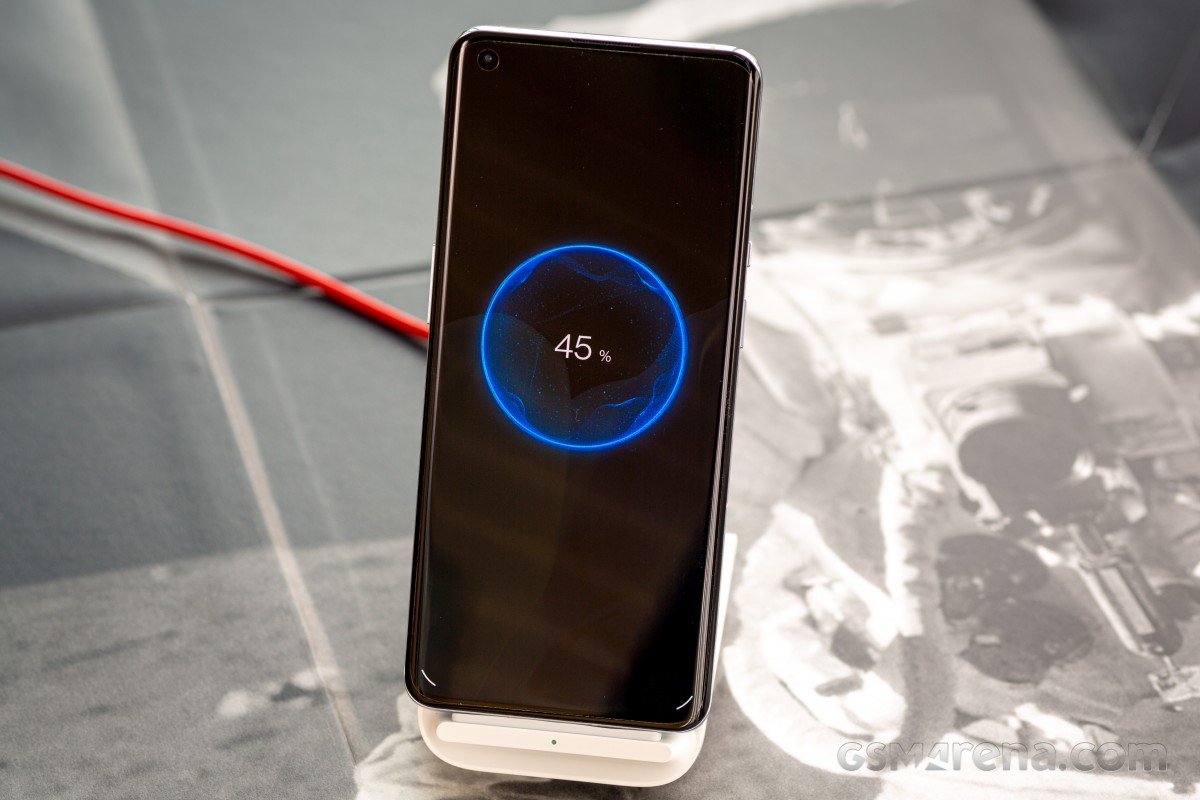 The Warp Charge 50 Wireless dock promises a full charge in 43 minutes. In our 30 minute charge test, we achieved a 70% charge.

The OnePlus 9 Pro also supports reverse wireless charging, which can recharge other Qi-enabled devices at up to 5W.

The OnePlus 9 Pro has a stereo speaker setup with a dedicated loudspeaker on the bottom of the phone and the earpiece serving as the second channel. In portrait, the earpiece get the left channel, while in landscape the phone uses the accelerometer to switch the channels to match the orientation.

The OnePlus 9 Pro earned a 'Very Good' rating for loudness in our test, essentially the same result as the OnePlus 9, though with a marginal edge when it comes to the numbers.

This device has a major bug with proximity sensor, this is know issue that has not been fixed since the release of this phone. I regret the day I bought OnePlus 9 Pro and my suggestion to everyone is to stay away form them.

I bought the 11T pro from xiaomi as a main phone and I need a camera one. I originally wanted an S22 but I tried it at the store it was surprisingly sicky. How is the camera on this one? Found it on amazon for $810 today (best value in my country) ...