The OnePlus 9RT is visually very similar to the OnePlus 9 with some minor differences. It's quite likely that OnePlus has repurposed the same frame for the 9RT to save on some costs.

The front of the device looks pretty typical, with thin bezels and a nearly edge-to-edge display. The front camera is placed inside a hole punch on the left. Other manufacturers like Samsung and Xiaomi have managed to make the hole a lot smaller on their phones, but the one on OnePlus phones continues to be rather large and distracting. The earpiece and the sensors for the light and proximity are inside the slim top bezel. 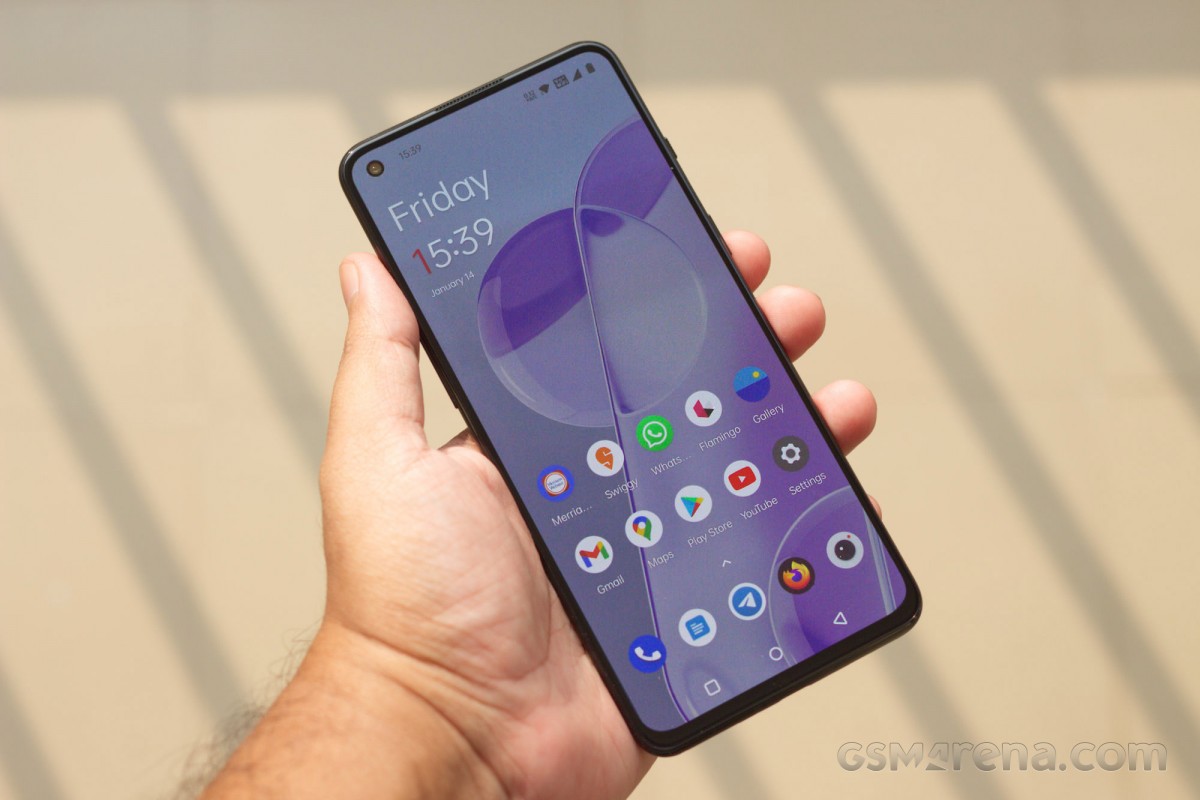 Fortunately, the OnePlus 9RT uses a flat display, so there's no unnecessary glare or accidental touches. The corners are rounded with pleasantly symmetrical curvature on all sides.

The side frame of the OnePlus 9RT is made out of aluminum. While this may seem like the norm and was also the case on the OnePlus 9R, the OnePlus 9 had a plastic frame instead. The top side of the frame has been flattened out, but you're better off not trying to balance the phone on it.

The sides of the phone feature the familiar OnePlus controls. On the left is the volume rocker and on the right are the power button and the alert slider. All buttons have a pleasant tactile click to them and the alert slider, in particular, is an absolute joy to operate. 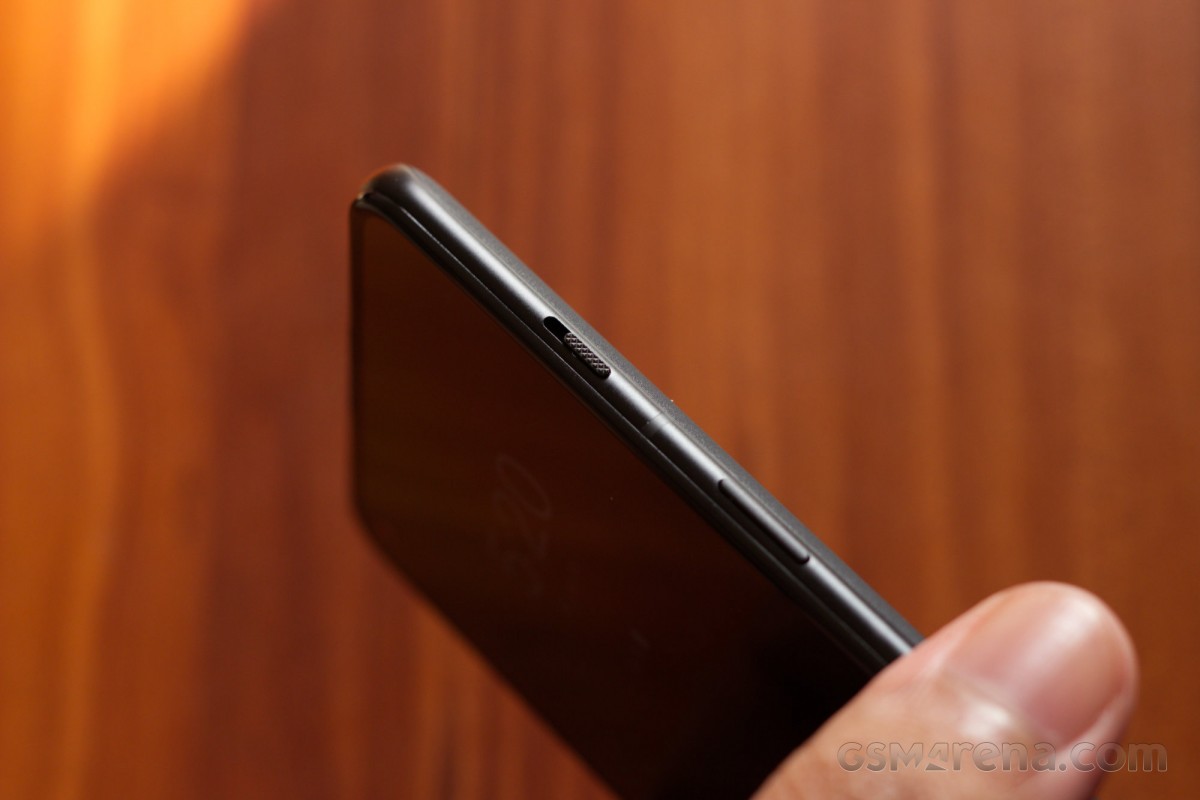 The OnePlus 9RT comes in two colors, Nano Silver and Hacker Black. Our review unit is the latter, and the special thing about this variant is the matte black glass on the back. This absolutely stunning finish visually reminds one of the sandstone black finish of older OnePlus phones, but its feel is silky smooth. When hit with light, the entire back glimmers with the brilliance of a billion stars while diffusing any reflection of the light source. Also, try as we might, we couldn't get any fingerprints or smudges to show up here.

Unfortunately, this stunning finish has one major downside, and that's a complete lack of grip. The only grippy thing on the back is the glossy OnePlus logo, but the rest of it is slipperier than an eel dipped in butter. While it certainly heightens the textural feel of the back, it will also heighten your adrenaline as the phone invariably slips from your fingers. 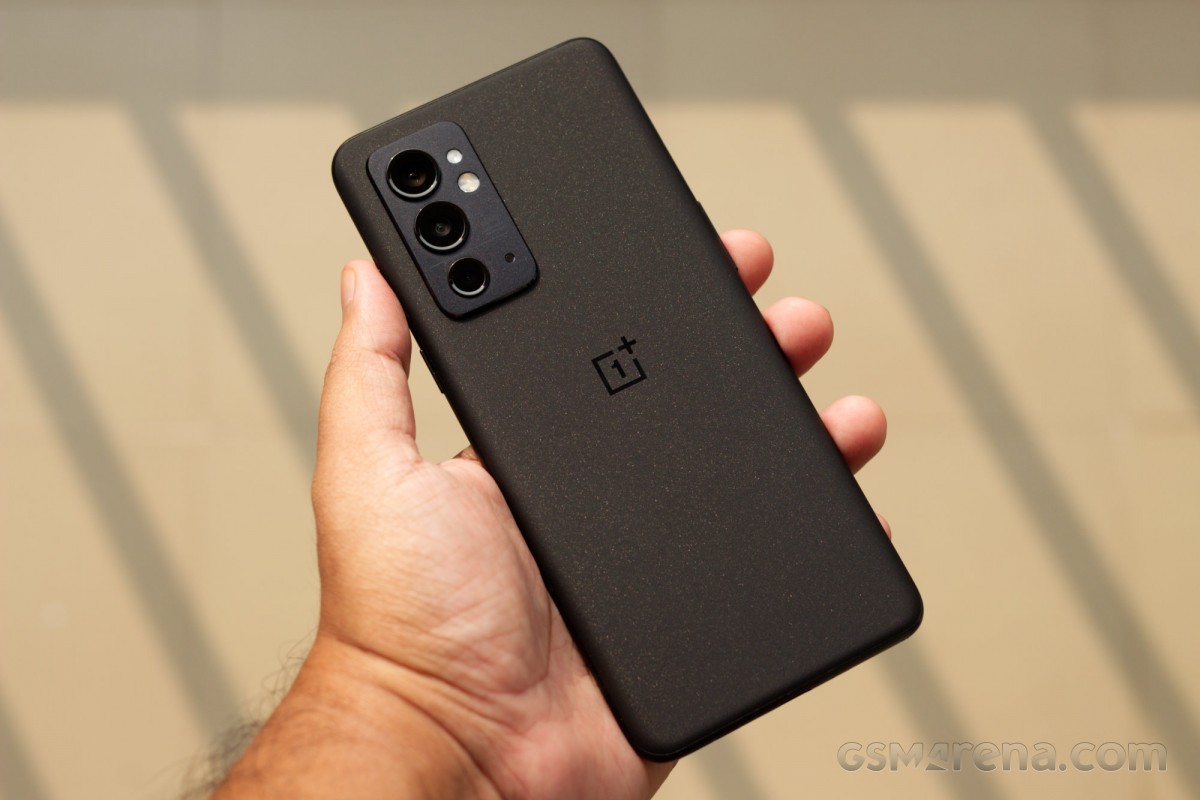 The OnePlus 9RT is a fairly large phone and quite a bit tall. The slippery glass back also makes it difficult to grip unless you have large hands. At 198.5g, it is also on the bulkier side. This makes it less pleasant to handle than something like the Nord 2, especially for people with smaller hands. We recommend using a case for extra grip and peace of mind, even if it makes the phone larger.

Lastly, we'd like to mention that there is no IP rating for the OnePlus 9RT. The phone may have some level of ingress protection built-in, but you shouldn't rely on it.

The OnePlus 9RT has a 6.62-inch, 120Hz 2400x1800 Samsung E4 OLED panel. The display is similar to the one on the OnePlus 9 and the OnePlus 9R but ever so slightly larger. OnePlus claims full coverage of the sRGB and Display P3 color spaces. 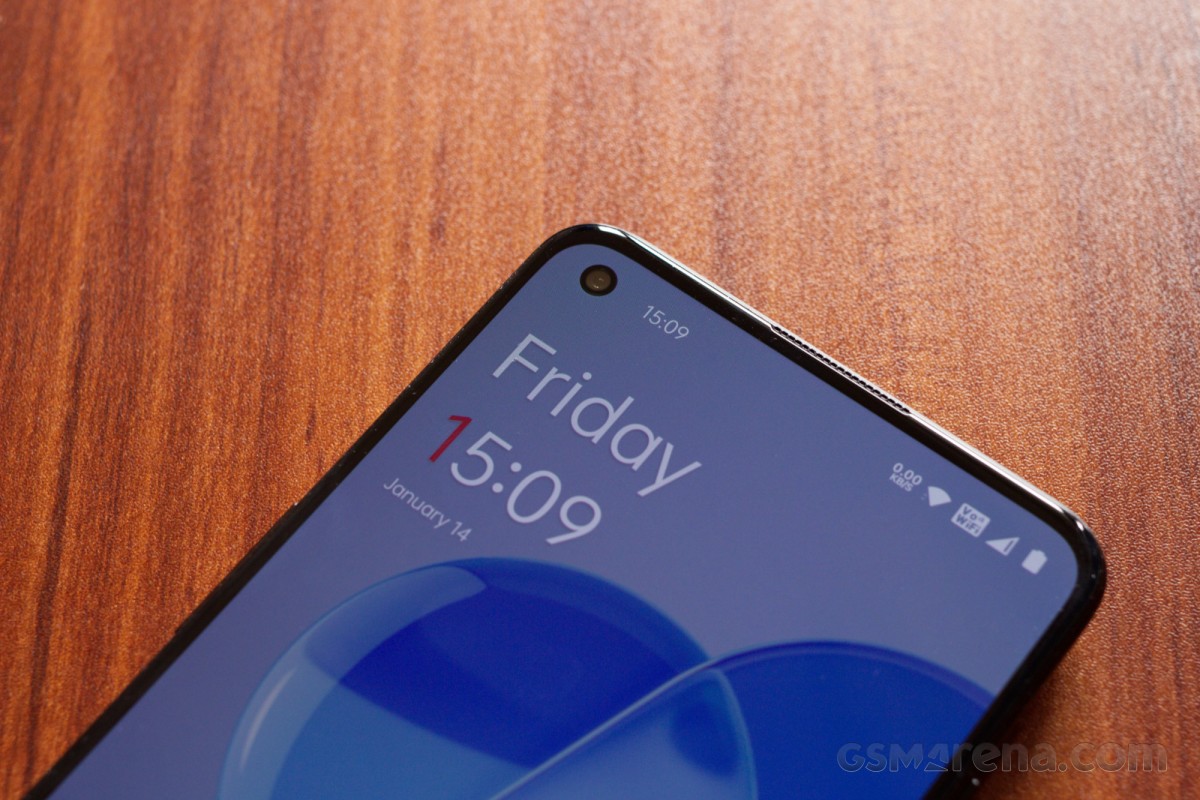 The phone allows changing the color profile from the settings. You can choose from Vivid (DCI-P3), Gentle (sRGB), Cinematic (Display P3), and Brilliant (unclamped). The phone also allows manually adjusting the color temperature regardless of the profile you pick. The phone supports color management but it was either bugged or not properly implemented on our review unit as any application announcing wide color support would switch entirely to DCI-P3 rather than just specific elements on the screen.

OnePlus usually makes some claims about the color accuracy of their displays, but none were made about the OnePlus 9RT, and it shows. Although we didn't perform any measurements, the OnePlus 9RT display had a noticeable green tint in the standard sRGB profile. A color tint slider would have come in handy here, but no such option exists out of the box.

The panel also has minor viewing angle issues typical of mainstream OLED panels, where tilting the phone causes a rainbow pattern to scroll up and down. However, this is usually only noticeable on a white screen and won't be visible if you mostly use dark mode.

Aside from that, the panel quality is fine. The colors can get plenty saturated for those who prefer them that way, and brightness is mostly adequate under bright light. The resolution is also respectable for the display size, and the text still looks good even with thin typefaces.

The display supports a dynamic 120Hz refresh rate. This means it will occasionally drop down to 60Hz in certain apps, such as those with a Map element on the screen. YouTube is also permanently locked to 60Hz even if you aren't playing any videos. More frustratingly, OnePlus continues to lock most games to 60Hz max. Only a handful of titles are allowed to run at up to 90Hz, but none so far run at the full 120Hz refresh rate. 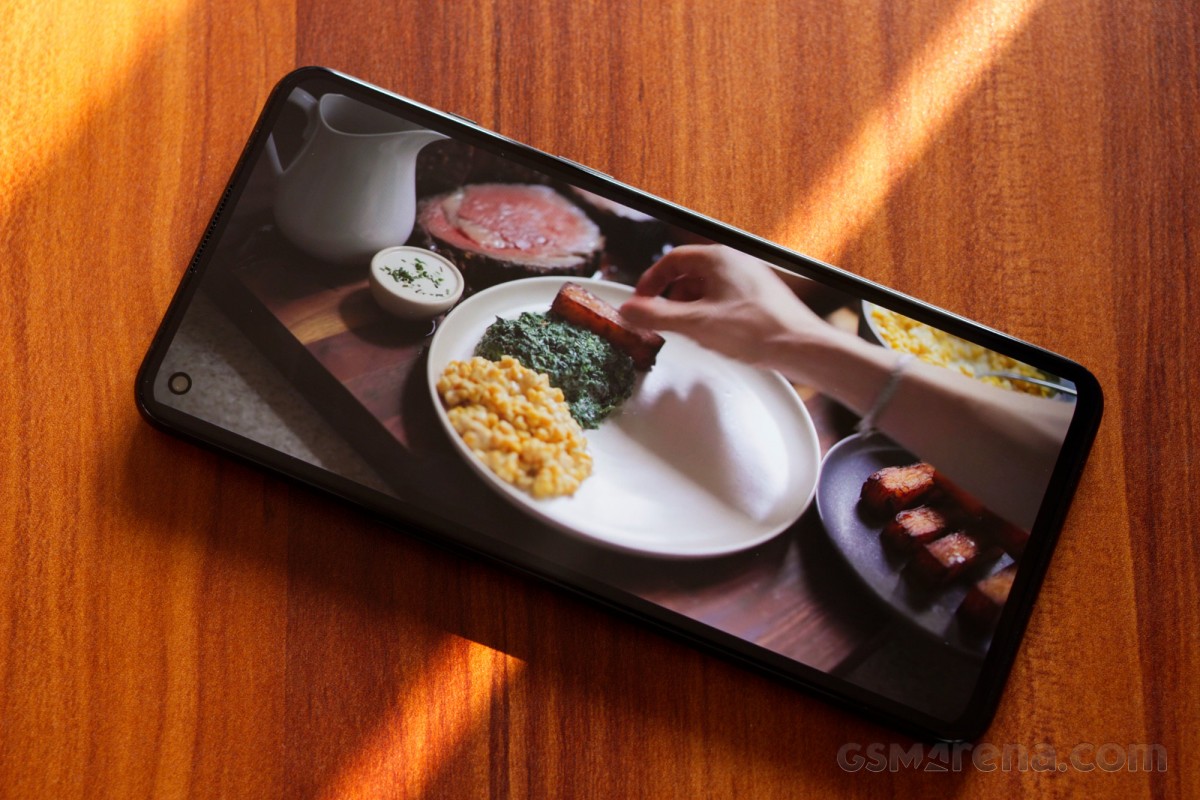 OnePlus claims a touch refresh rate of 300Hz in normal operation and 600Hz in gaming. While that has its advantages, we would appreciate it more if the company would unlock the refresh rate as it would have a much greater impact on gaming than gimmicky touch refresh numbers.

OnePlus does not claim support for HDR for the display, but it has been left enabled in software. This causes apps like YouTube and Netflix to switch to showing the HDR version of the content, which doesn't look any different on the display than the SDR version as this is just a standard 8-bit panel with no HDR support. The phone does max out the display brightness when you play HDR content, but that's just a cheap parlor trick and not true HDR.

We've only had our OnePlus 9RT review unit for a few days, so we haven't had time to run our full battery life tests on it. The average battery life is lower than typical figures in the first few days of testing due to the frequent usage, so there's not much glean from those numbers. 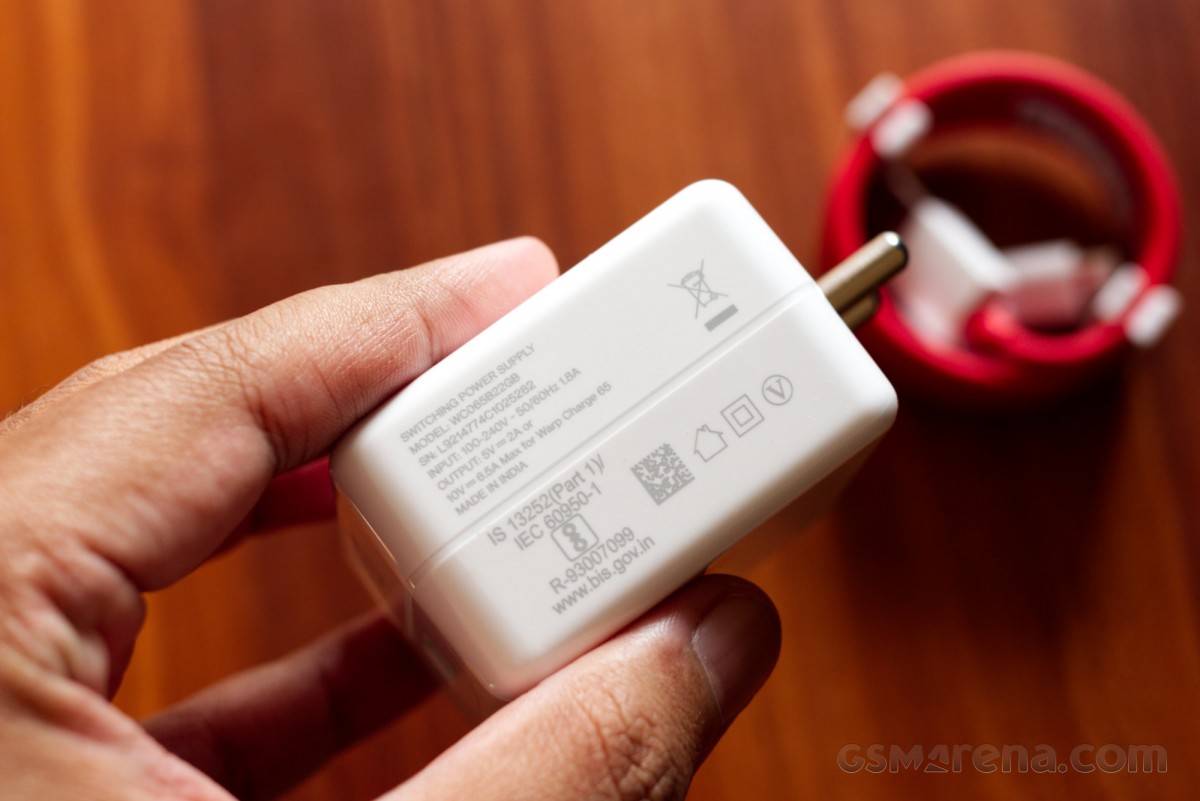 In terms of charging performance, the OnePlus 9RT does very well, charging to 100% in about 30 minutes using the bundled 65W Warp Charger. The phone also supports 33W PPS charging for reasonably fast charging even with third-party chargers, but we didn't have one at hand to test.

By default, the phone is set to charge slower by learning your charging patterns, but you can disable that behavior from battery settings to always charge at maximum speed. This obviously ages the battery more rapidly and is generally not recommended.

The OnePlus 9RT has a standard stereo speaker layout, with one speaker at the bottom of the phone and the other being the earpiece. The audio quality is reasonably good for mostly vocal content such as YouTube videos or podcasts and less impressive for music.

However, the problem with the sound is its lopsided nature. The earpiece speaker is noticeably quieter than the speaker at the bottom of the phone, which not only sounds unbalanced but also gets quite distracting while watching in landscape mode.

The phone also supports Dolby Atmos audio processing, which is forced on all the time when using the speakers. The updated settings for Atmos allow choosing from scenario-specific profiles such as movie, music, or gaming, and environment-specific profiles such as indoor, outdoor, commute, and flight. None of these sound particularly impressive, and you also don't get much of a stereo effect due to the wimpy earpiece speaker.

I have both 8t(with fluid Amoled) and 9rt. 9rt display is bertter than 8t. Fluid is just a word of marketing.

They have made compromises in Display. It's only Amoled. Not Fluid Amoled. What's the difference u say? First, bigger chin at the bottom(compare with 9R). Also Rainbow affect when tilted.

I hope Oneplus will get better sound quality too. I currently have Oneplus Nord, the sound is far inferior to any Xiaomi I had.