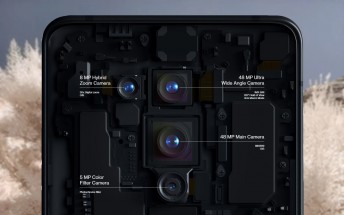 OnePlus 8 Pro’s Photochrome mode, which used an IR camera that can see through some plastics and thin clothing, proved controversial, so the company decided to disable it temporarily. Originally, it stated that this will affect only 8 Pro phones in China, but now an international update is rolling out that also disables the feature.

Oxygen OS 10.5.9.IN11AA has only one item in its change log, which says that the Photocrhome filter will be “temporarily removed for adjustment”. It promises that the feature will be re-enabled some time in June.

There’s an OTA update in India, 10.5.9.IN11DA, which likely has the feature removed as well. A similar update is yet to reach Europe, but it’s probably a matter of time now.

OnePlus has not made it clear what exactly the “adjustment” will entail and how much of the original functionality will be returned.

Manufacturer just turning off features on a whim (even temporarily, what's even the point then) is a new level of anti-consumerism and I sincerely hope EU investigates this bullshit

How much were you going to use the photochrome mode if just disabling it will make you not buy it. (Lenny Face) In all seriousness, it's a nice feature but not a deal breaker.

Thanks yes. Only people holding and trying findx2pro can judge. I have tried best phones every 2-3 months. findx2pro is not comparable. I do make a declaration it is on a another level on not 1 but couple of things.