The OnePlus Nord offers a clean, straight-forward exterior. In fact, with its flat display, classic sloping body shape and elongated, vertical main camera assembly, we would even go as far as to call its look classic. The double-wide, pill-shaped selfie camera punch-hole does, admittedly, deviate from what we would consider the "classic" phone design. It's not really an eye-sore, but it does distract from full-screen content, while also taking away quite a bit of room in the Android status bar, leading to crammed UI elements. 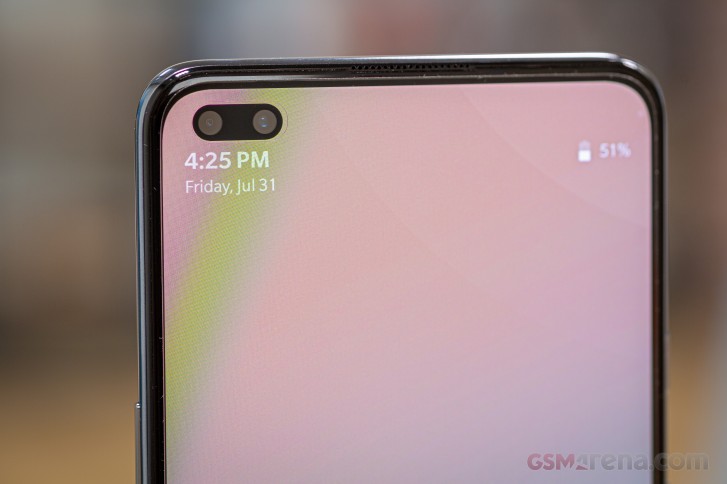 We personally appreciate the flat Gorilla Glass 5 surface on the front of the OnePlus Nord. It doesn't introduce odd corner bends and warps in your videos and will always be the preferred way of getting more control and better handling for things like gaming. Plus, getting a good-quality glass screen protector for a flat display is massively easier. That is, of course, if you feel the need for extra protection to your phone. We'll get into that a bit more in the durability section for the OnePlus Nord. 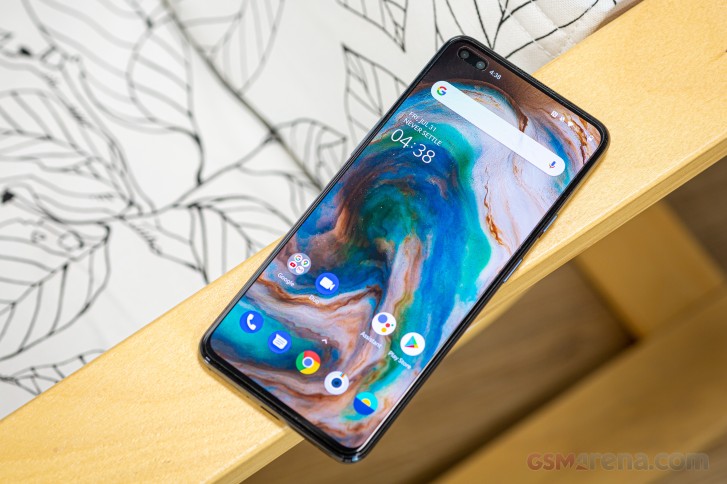 On the flip side of the curved display debate, we will admit that wrapping the display edges around the frame has become the more "premium" look of the day. Whether subjective or not, it has allowed, in some capacity, for narrower and easier to grab handsets. For comparison, the 158.3 x 73.3 x 8.2 mm body of the OnePlus Nord is a bit wider than the OnePlus 8. Despite the fact that the latter has a bigger 6.55-inch display, compared to the Nord's 6.44-inch one. 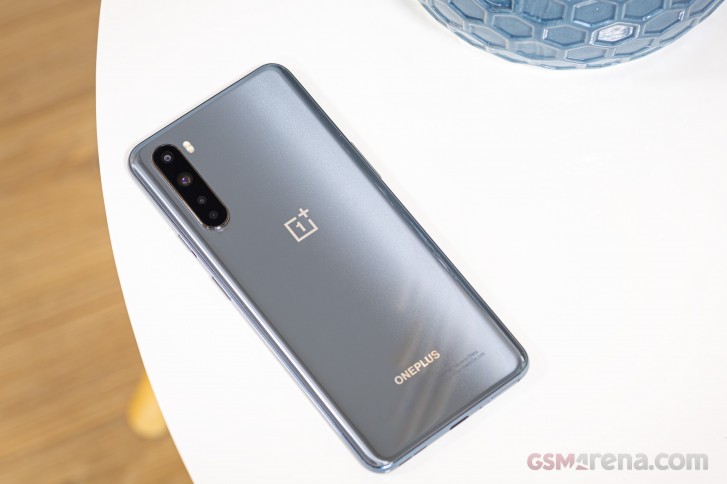 The Nord is also a bit heavier than the OnePlus 8, tipping the scale at 184 g, four grams more than the company's mainstream flagship. And it is also ever so slightly thicker. The Nord somehow manages all of this despite having a smaller 4,115 mAh battery a plastic main frame and like we mentioned - a smaller display. A fairer way of looking at this comparison, though, simply has the OnePlus 8 sporting a befittingly more-premium and refined design and build than the mid-ranger Nord. No shame in that. 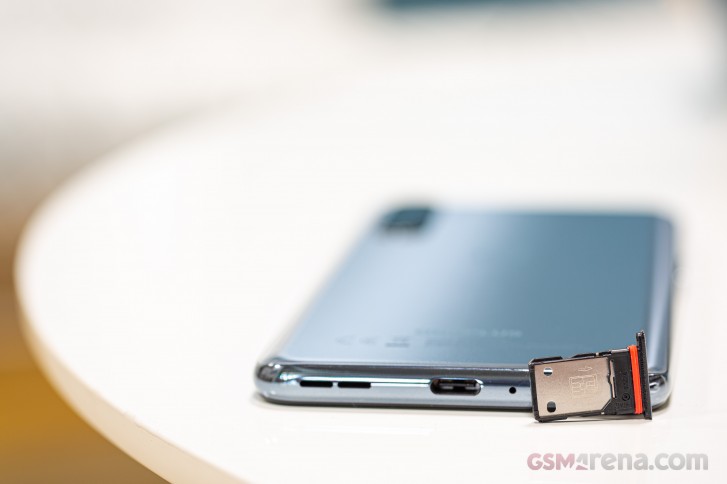 Even so, the OnePlus Nord neither looks or feels cheap. In fact, it has its overall silhouette largely inspired by the Realme X50 Pro - a proper flagship offer, also stemming from the vast ranks of the BBK Electronics corporation. We think the OnePlus Nord is making the best of said design, especially in the signature Blue Marble color variant. The Gray Onyx unit, we have for review, is considerable "less-fun", for the lack of a better term, but does also manage to look more serious and grounded. The distracting, colorful reflections from the back of the Blue marble one, we discussed in our hands-on review are not an issue with the Gray Onyx one. 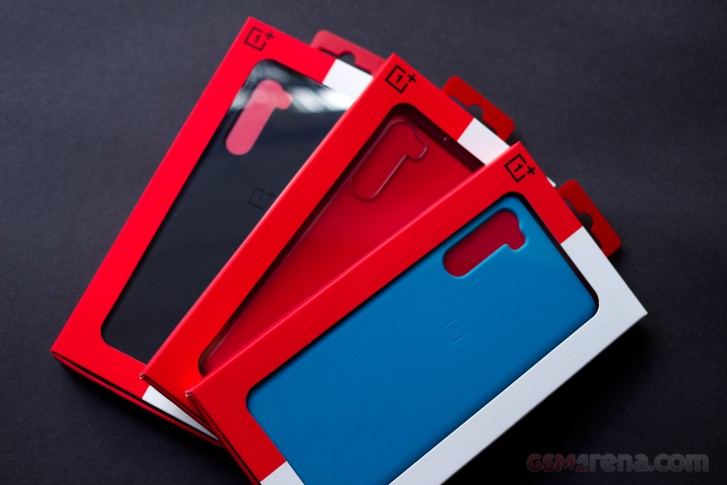 We don't expect many Nord owners will be using the phone without a case, though. One reason being fingerprint magnet that is the Gorilla Glass 5 back of the phone. And then, there is the big question of durability.

Addressing the elephant in the room straight on - the OnePlus Nord has a plastic middle frame. A fact that isn't instantly apparent while holding the phone, thanks to the excellent job OnePlus has done with the convincing silver finish on the outside rim. As far as other positive aspects go, it is worth noting that the Nord manages to weigh just 184 grams, compared to the Realme X50 Pro and its 205 grams. Despite the nearly identical design and proportions, shared between the pair. 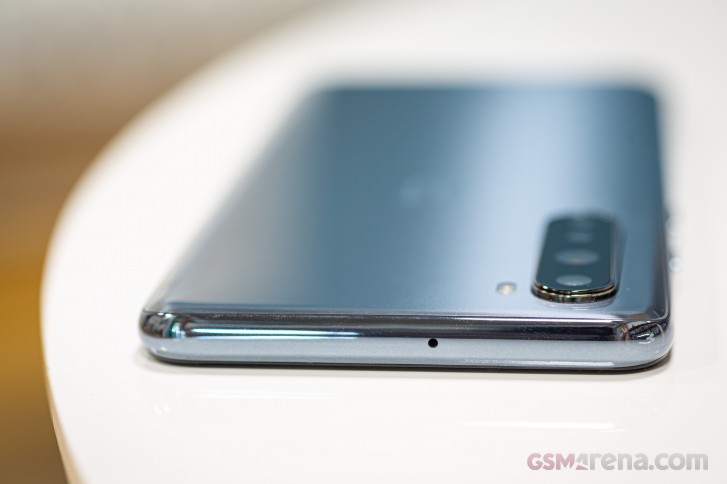 Also, plastic does not dent in the same way metal does. That is not to say that you can't damage it though. On the contrary. As a certain durability torture-test video already showcased, you can easily take-out entire chunks of frame from the Nord, revealing a different color plastic underneath. And, of course, there is the matter of bending, which the Nord is apparently susceptible to. Particularly around the power key, which has typically been the base with "bendy" phones in the past. Honestly, this probably won't be a real-world concern for most. At least we would not consider it a first-tier dealbreaker. If that makes any sense. Still, prospective Nord buyers should still keep this in mind. A hard case can go a long way in providing that extra little bit of structural integrity and you probably shouldn't carry the Nord in your jeans back pocket. We would give that advice for pretty-much any modern smartphone, though.

Plastic frame cost-saving aside, the rest of the bill of materials on the Nord is solid. That includes the two Gorilla Glass 5 sheets - front and back. OnePlus also includes a well-applied plastic screen protector for the display. You can probably leave it on while you get used to your new phone. It will scratch-up easily, though, making it a temporary additional protection layer. 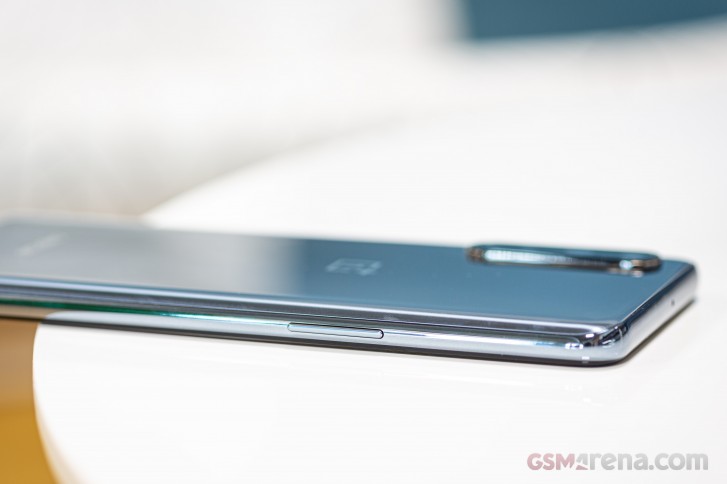 The metal power button and alert slider are a nice touch. Oddly enough, the volume rocker is not metal.

The OnePlus Nord lacks an official ingress protection rating. Not that one would be expected at its price point. Even so, OnePlus maintains that the phone should survive the occasional accidental splash of water, if need be. We are willing to corroborate this after seeing the thick and nicely-sealing rubber rim around the SIM card tray, as well as the plastic flap for the Type-C port on the included silicone case.

We don't typically dedicate a section to controls in most of our reviews nowadays. Mostly since there is little beyond a standard layout to discuss. For the OnePlus Nord, in particular, we still wanted to bring attention to the inclusion of an alert slider. The textured control is neatly positioned right above the power button and offers satisfying actuation. It has always been a staple of the OnePlus control scheme and keeping it around on the Nord actually has a lot of significance. Most of all, it shows that OnePlus is still connected to its roots, in at least some capacity. We can have lengthy discussions about the current state of the smartphone market, as well as many of the more controversial decisions on the Nord. But at least the alert slider remains a mainstay. 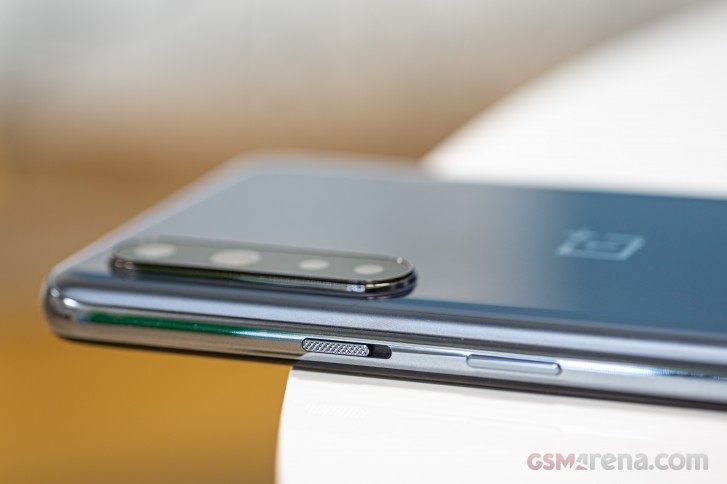 Control-wise, things that the OnePlus Nord has include a single bottom-firing speaker, a single or Dual NanoSIM tray and a USB 2.0 Type-C port. All on the bottom frame. Things notably missing from the mix - a stereo speaker setup, not even a hybrid one, a microSD slot, a notification LED and a 3.5mm jack. The last one is particularly unfortunate, since there was no Type-C to 3.5mm dongle in our OnePlus Nord box.

The fingerprint reader is an in-display unit of the more-popular optical variety. It offers very solid performance, both in terms of accuracy and speed. 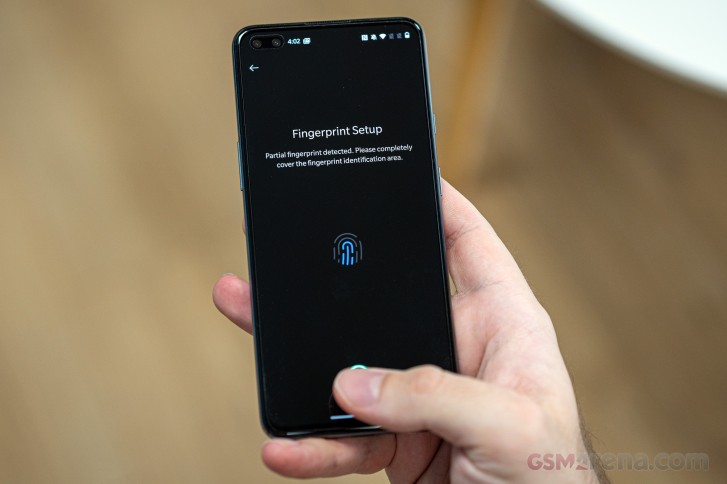 In terms of connectivity, the Snapdragon 765G, with its Sub-6 5G capabilities is probably the star of the show. There is no support for mmWave on the OnePlus Nord but there are no plans for immediate US release so that's irrelevant. OnePlus had a separate OnePlus 8 UW model for Verizon with mmWave 5G support so that's one way things might turn out for the Nord if it gets to US shores eventually.

Currently, you can get the OnePlus Nord in either a single nanoSIM or a dual nanoSIM configuration. The dual SIM model allows two simultaneous LTE connections only and 5G + 4G standby is coming in a future OTA update. 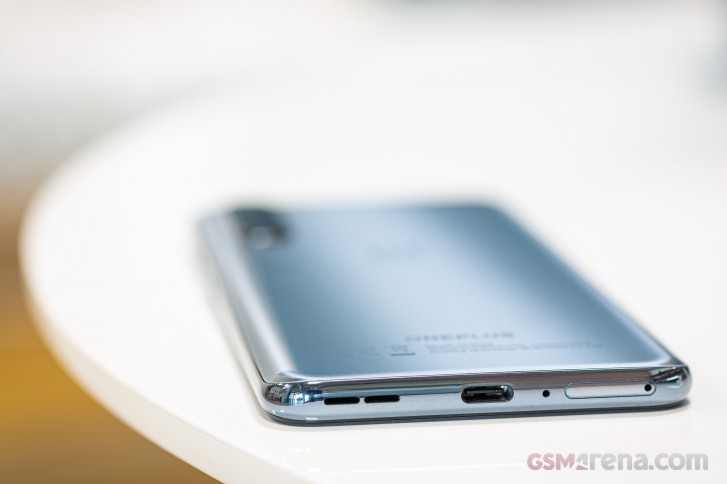 Local connectivity on the OnePlus Nord has all the basics covered, with nothing too fancy. You get Dual-band Wi-Fi ac (no Wi-Fi 6), Bluetooth 5.1, with LE and aptX HD, GPS (A-GPS, GLONASS, GALILEO, BDS, SBAS, NavIC) and an NFC module.

In one plus Nord there is in built call recording feature available but there is a big issue first of all while having a call there is a ring which plays automatically so the other side person knows that the call is being record. 2nd issue some time ...

One plus nord ce is a asshole phone...it has a major hanging problem even in 90 % free memory.... They have cheated us with new update... Don't buy Asa hole company

I got very disappointed with OnePlus service centre and customer care support... OnePlus aren’t even deserving of a 1 star review. Do NOT buy a OnePlus device especially the one plus nord! I purchased OnePlus nord phone and immediately no...