OnePlus One review: When opportunity strikes

The OnePlus One comes with the CyanogenMod gallery, which looks similar to CyanogenMod's Gallery Next, a gallery app that's still in beta testing.

By default launching the app will reveal album view - each album cover consists of thumbnails from said album. A swipe to the right reveals the menu slider, which allows you to look at your images by moments, dividing you images by the day it were taken on and media, giving you the long list of each and every image or video file you have on your OnePlus One.

You can also view multimedia from different devices supporting DLNA sharing or add albums from online sources such as Goolge+, Flickr, Facebook and Dropbox.

Viewing an image is great on the OnePlus' quality, ample display. When viewing a photo you have a swipe-up menu that gives you brief information like file name, when it was taken and where it resides on the phone memory. Additional EXIF information isn't listed in the gallery, though.

The video player of the OnePlus One is pretty simple. It's embedded into the gallery app and has only a timeline scrubber and play/pause controls. When viewing with headphones on you have the option to add audio effects - bass boos and 3D effect with adjustable strength.

There are no subtitle settings available, sadly. On the upside the OnePlus One managed to play each and every file we threw at it - MKV, DivX, XviD, MP4, AVI, WMV including those with AC3 and DTS audio. That's a rare sight. Very impressive, indeed!

The OnePlus One comes with one music player - Google Play Music. It has a simple, thumbed interface with album art and a side-swipable menu that will take you to your playlists, your library, the settings page and the New Listen Now feature, which tries to determine what you like and the sequence of your track-changing so that it can start offering you music you might like to play next.

While the player is working, half of the lockscreen features the album art and track info for the current song along with dedicated playback controls. The notification area also lets you control the playback via an expandable notification.

Choosing to go to the equalizer settings through Google Play Music you end up in a separate app designed by Cyanogen called AudioFX. It allows you to customize the sound coming from either the speaker, headset, USB, Bluetooth and Wireless, which is convenient by allowing you to have different settings for different occasions.

The equalizer is a 5 band one and you have additional options for bass boost and surround sound with an individual setting for the type of room experience you're looking for - from large hall to small room.

With the OnePlus One we were somewhat worried that audio quality might be one of the corners the company has cut to achieve its lower-than-expected price tag. The first part of our test (the one where the phone is connected to an active external amplifier strongly suggest otherwise, though.

The smartphone impressed us with very high volume levels and excellent readings in every part of the test.

It's not all roses though - plugging in a pair of headphones caused quite a lot of degradation. Its volume levels plummeted to only average levels, the frequency response started missing the mark now and then, while the IMD and the stereo crosstalk increased too. It's a decent performance here, particularly given the market segment, but not quite the audiophile experience that the first part of the test was. 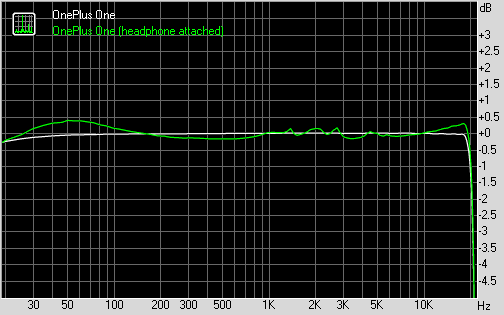 That’s correct . I faced the same problem and had to get rid of it

One plus one 360 cover want

My oneplus 1 phone is very good, I have it already 5 years and it's still working perfect