Oppo A32 was the best sold phone in China in Q4, Mate 40 Pro is fourth

A new report from Quest Mobile outlined the top four best selling smartphones on the Chinese market for the October-December period. Leading the way is an affordable entry – the Oppo A32 which managed over 9 million sales. The device was originally introduced back in September for CNY 1,199($185) and boasts a well-rounded spec sheet with a 90Hz refresh rate IPS LCD, Snapdragon 460 chipset and 5,000 mAh battery. 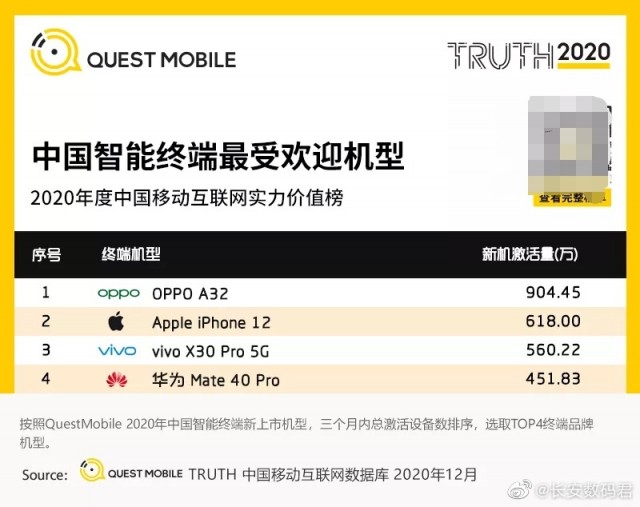 Next up we spot Apple’s iPhone 12 which secured 6.18 million sales. The affordable alternative to the 12 Pro models is Apple’s best selling smartphone in most markets and helped Apple secure a record 82 million shipments globally. Rounding out the top-three is vivo’s X30 Pro which sold 5.6 million units.

Huawei’s Mate 40 Pro came out in fourth place with 4.5 million sales which is a remarkable feat given that the phone was constantly sold out on all major online platforms.

The anxiety of Huawei fans outside China is indeed starting to grow. 4.5 million Mate 40 Pro units sold in China alone; That's 50% of the available Kirin 9000 chips. I'm seriously worried at the fate of the Mate X2 and the P50-series...

vivo tried to wink but the cops saw vivo