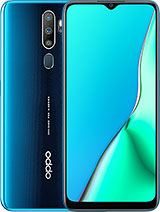 its a very nice phone ... all luxiries that u looking for a phone is been file up in this phone ... sweet as !

dont buy this crappy phone its slow it overheats it doesnt look nice and its expensive. bought this sh*t for 300 pounds and i am now selling it on ebay for a better value (130 pounds)

Get the poco x3 pro instead of this. It has much better specs and less price

the sounds dis appear whenever i got notification from other apps and it affects when im watching in netflix and when im in call at messenger the sounds disappear and hear nothing. i need to end my call in order and exit my netflix in order to back the sounds of the movie i watch and also the same in messenger and fb

Anonymous, 25 Mar 2021I'm into my second year of using this A9 . And the onl... moreHa ha ha ha simple,go YouTube then search (oppo a 9 2020 screen blocking)you will get solution for that,it is gpu rendering.

I really like this phone. I've been using this since 2019. So far I don't have any problem with the phone. EXCEPT the color of the back part of the phone, the paint is already starting to wear off even though for almost two years, it has been inside a phone case safely. But overall, I'll give 9/10. After sales support is super. As well.

This phone is one of the best phones that I have ever used, very reliable, fast, never hanging, very long lasting battery... it was used as a hot-spot for more than 8 devices simultaneously without any problem... it looks like a server, it is great phone

Why after upgrade from Android 9 to 10 smart sidebar flotang mode cannot use when I play Pubg mobile if in YouTube all can use ?

I have an Oppo A9 (2020) for over a year now and on the first 6 months of using it, no errors or issues have been encountered. Although checking the system information, I've noticed that over 8gb of RAM, half of it is being used leaving me only 4GB to use despite of background apps being stopped and only few runs.

Also, as it gets to over a year, the phone starts to malfunction quite some time especially in gaming. It lags, and can't process higher data of messages or text on apps like messaging, facebook and especially on chrome as it forces it to stop completely. And after every restart, the phone lags with a delay of about 5 seconds.

Javaid, 07 Feb 2021Daos have Allway on Display In Oppo A9 ?No always on display

I'm into my second year of using this A9 . And the only reason I'm replacing it because I want an Amoled display but more so because I have had a terrible issue with my Oppo. It's been locking and unlocking on its own and shutting screen over my apps whenever my network/wifi signals drop. It force closes shut the display and starts lighting up screen on and off like it's having a seizure. The only chance I get is to somehow click airplane mode in between the screen turning on and off. It stops going haywire. But only gets normal in good continuous signal range.
Can someone help me get an idea or a clue as to why this is happening? Sometimes I feel the wackiest things happen to me.

Uhmm i have a problem. Ever since i updated my phone to a new version of software, ghost touches slowly appearing whenever i touch the screen slightly. I tried changing screen protector to tempered glass yet it's still the same problem. But if i press harder when it happens, it disappears for a few minutes. Why is this happening to me?

Anonymous, 23 Dec 2020Updated my phone to Android 10. It's getting heated ve... moreIs it really the reason? If it is, I've got the same problem and it makes me super sad :(

Its been exactly 1 year since i bought my phone. My primary problem is that it heats up very fast especially when Im playing games