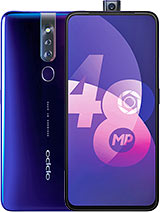 Oppo f11 pro has gyroscope gsmarena did not mention it... Hope you update soon

Anonymous, 01 Feb 2021My oppo f11 is getting hanged many times after the color OS... moreJust format your phone after update of ANDROID 11.... maybe this could help your problem

Nbs86, 23 May 2021Hi! There is some problem with wifi connexion after android... moreIt's Will fix with another update

Hi! There is some problem with wifi connexion after android 11 upgrade!!!!

Anonymous, 18 Apr 2021You are wrong dude LOL Realme WAS owned Oppo, but now Realm... moreThats just marketing. We all know Oppo still owns realme, they just make press releases like this so we dont confuse which is which. All the parts and supply chain are still shared by these brands, even r&d. That's just how marketing works.

Anonymous, 18 Apr 2021You are wrong dude LOL Realme WAS owned Oppo, but now Realm... moreXIAOMI does own poco and redmi but there a alot of sperate redmi and poco workers plus there is no official news on thier separation unlike huawei and honor dude

Shun, 07 Apr 2021Realme is a low class phone? Don't you know that Oppo ... moreYou are wrong dude LOL Realme WAS owned Oppo, but now Realme is fully independent from Oppo, just like Redmi Poco away from Xiaomi and Honor away from Huawei, they are fully independent and not controlled anymore with their mother brand

John Bee, 19 Dec 2020someone is always hacking my oppo f11 pro, how to stop prot... moreOppo itself is stilling data of users . In The appmarket of oppo we cannot control permission it is always by default access of storage . They are forcing to use their heytap cloud software so that we will upload all data to their cloud and they can more easily access our data

Anonymous, 01 Feb 2021My oppo f11 is getting hanged many times after the color OS... moreDitch your old phone

My phone the 48mp camera not so clear photo ..😅

My oppo f11 is getting hanged many times after the color OS11.1 software update.
It's annoying a lot.
Any suggestions and solutions?

My aunt bought this phone about the same time as its release. Firstly, this phone has a decent battery life. It can take up to 2 days with moderate use. It is next to impossible to find any, if any, problems with the camera, a 48MP camera still is considered a legend in today's mobile market. Although there are 108 MP cameras out there(I'm looking at you Xiaomi Mi 10T Pro and Samsung S20 Ultra), those phones are meant for professional photographers or people who really like flagship phones. When gaming, it can run Mobile Legends at a stable 55-60 FPS. When playing more chip-challenging games such as PUBG, it can run at a respectable 30 FPS. You don't need to worry about the phone being uncomfortable while gaming. I can tell you by experience that this phone doesn't feel heavy or relatively hot when gaming. Basically, this phone is a bang for bucks.

Anonymous, 20 Nov 2020I Think my oppo A93 is better than F11 pro..mediatek helio ... moreThen why are you comparing newer phones to an older one?

someone is always hacking my oppo f11 pro, how to stop protect my phone from hacking?ASAP