The Gallery on the Oppo Find 7a is a custom job, but surprisingly one with less features than the vanilla app. The default view is a grid of folders, with a name and number of images for each folder labeled underneath. You can't filter images by location, time, people or tags like you would in the stock app.

Images inside folders are arranged on a rectangular grid and you have two options - image selection mode and start a slideshow. You can select multiple images (folders too) and then Share and Delete options become available.

Oppo's latest music player has quite a simplistic interface and is very easy to use and navigate. It supports the Oppo's latest audio customizations called WAVE as well as Dirac HD Audio.

The Wave audio enhancements apply on all music-related apps and games no matter if you are using headphones or the loudspeaker. There are a few WAVE presets you can use, but you can also customize one preset by yourself.

You can customize some basic options such as maximum bass, treble, volume and dialog, but you can also completely configure the audio frequency curve. So if you are using some high-quality headphones, you can fully customize your audio experience. We wish Oppo had provided an automatic configuration similar to Samsung's Adapt Sound though.

The music player UI is pretty straightforward - your music library is organized into a local list of all music, favorites, artists, albums and folders. There's also an option to add a playlist.

There's a playback mode button (normal, shuffle, repeat track) and a toggle for audio enhancement. That cycles through Off, Dolby and Dirac.

While the player is on, the notification area lets you control the playback via an expandable notification but there are no music controls on the lockscreen.

Google Play Music is preloaded on the Oppo Find 7a if you prefer that.

The Oppo Find 7a comes with a pretty simple-looking video player, which supports DivX, Xvid, Avi, MVK, MP4, etc. We had no issues playing files all the way up to 1080p resolution and the only real setback were files with AC3 sound, which obviously is not supported and the videos run without sound.

The interface for video selection is pretty basic too - a list of all available files. The player supports subtitles too, but there's only an on/off toggle here, you can't manually pick the subtitle file (so it would have to have the same name as the video file to work).

While watching a video you get a timeline scrubber, play/pause along with forward/back controls, a lock option (which locks the display against accidental touches) and a pop up toggle.

A feature that seems lifted right off the Samsung Galaxy flagships is the pop-up player. It's a small floating window that lets you have other apps working underneath. You can move it around to get it out of the way, but there's no resize option.

The Oppo Find 7a supports Wi-Fi display but you'd need a display with the standard's support to output video on.

Great audio output but not without some flaws

The Oppo Find 7a audio output is certainly among the cleanest we have seen when the smartphone is connected to an active external amplifier. Posting excellent scores top to bottom in the first part of our test, the Find 7a was also nicely loud, producing one of the best performances out there.

Plugging in a pair of headphones tells a different story, however. The stereo crosstalk increases way beyond the point where it can be considered as good, or even acceptable. The other readings remain great, but the high cross-channel leakage has the potential of damaging the whole audio experience for more exacting users and put the Oppo Find 7a below the current crop of flagships as far as audio output is concerned. 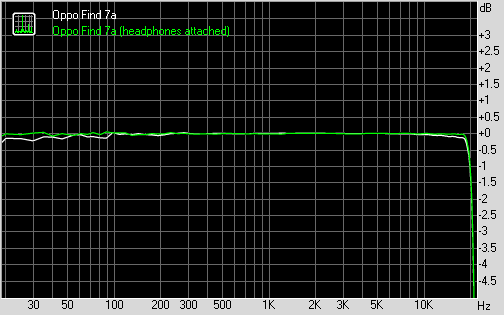 I just bought new Find7a a week ago for 2.7M IDR previously i used LG G2. I loved the Find7a. Plus 1. The gesture is helping for fast access 2. Sound during calling is very good Minus 1. Still on Jellybean, need service centre to upgrade....

Do consider lenovo P 70 before buying this

Best phone compare to others for the price...