Oppo got something right from the get-go that the other makers of large foldables don't seem to have figured out yet - the form factor. The original Find N from a year ago was a small, yet perfectly usable smartphone when folded, and transformed into a compact tablet in a squarish aspect, but leaning towards landscape orientation. It was a unique approach then, and nothing has changed now with the Find N2. 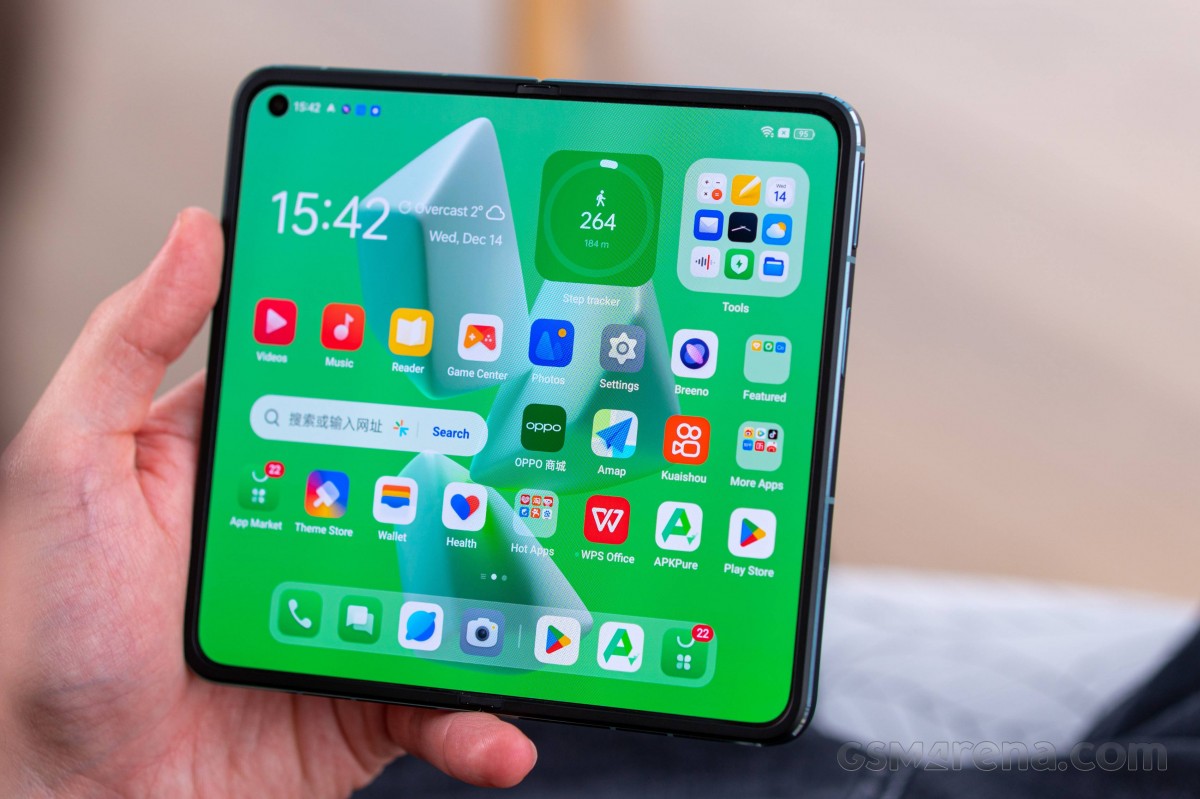 The Find N2 iterates on the concept of its predecessor and treats you to a 5.54" display on the outside that's perfect for general single-handed operation, calls, and other tasks that don't require a lot of screen estate. Oppo likes to compare the experience on the Find N2's outer screen to the Galaxy Z Fold4, and, indeed, the Find's proportions make so much more sense. 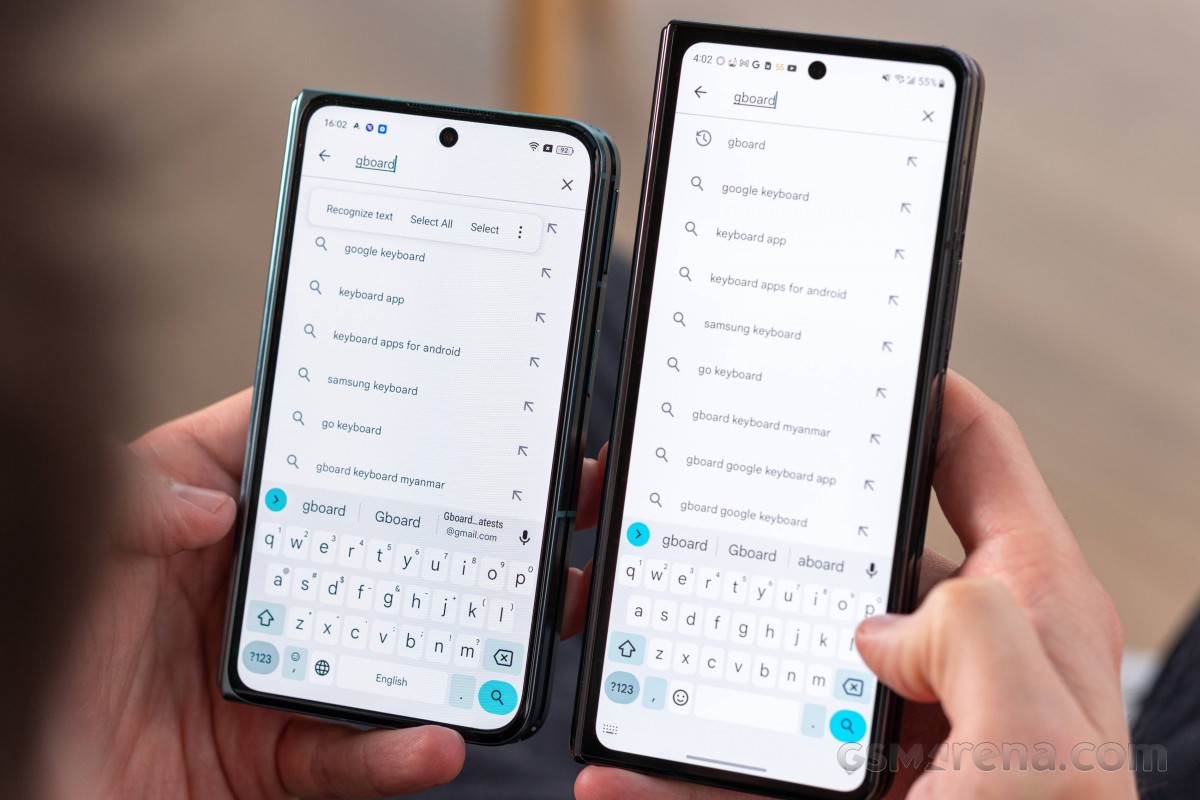 At 6.2 inches in diagonal, the Galaxy's cover display may sound like the better option because it should give you more room to work with. But the Fold's elongated aspect (23.1:9 this year) means that the 12% longer diagonal only translates to 5% more area, and that's only secondary to the fact that a display as narrow as the Galaxy's hampers keyboard use - and this reviewer will be first to admit that texting is how he spends the bulk of his smartphone use. In this aspect, the Find N2 is an easy winner. 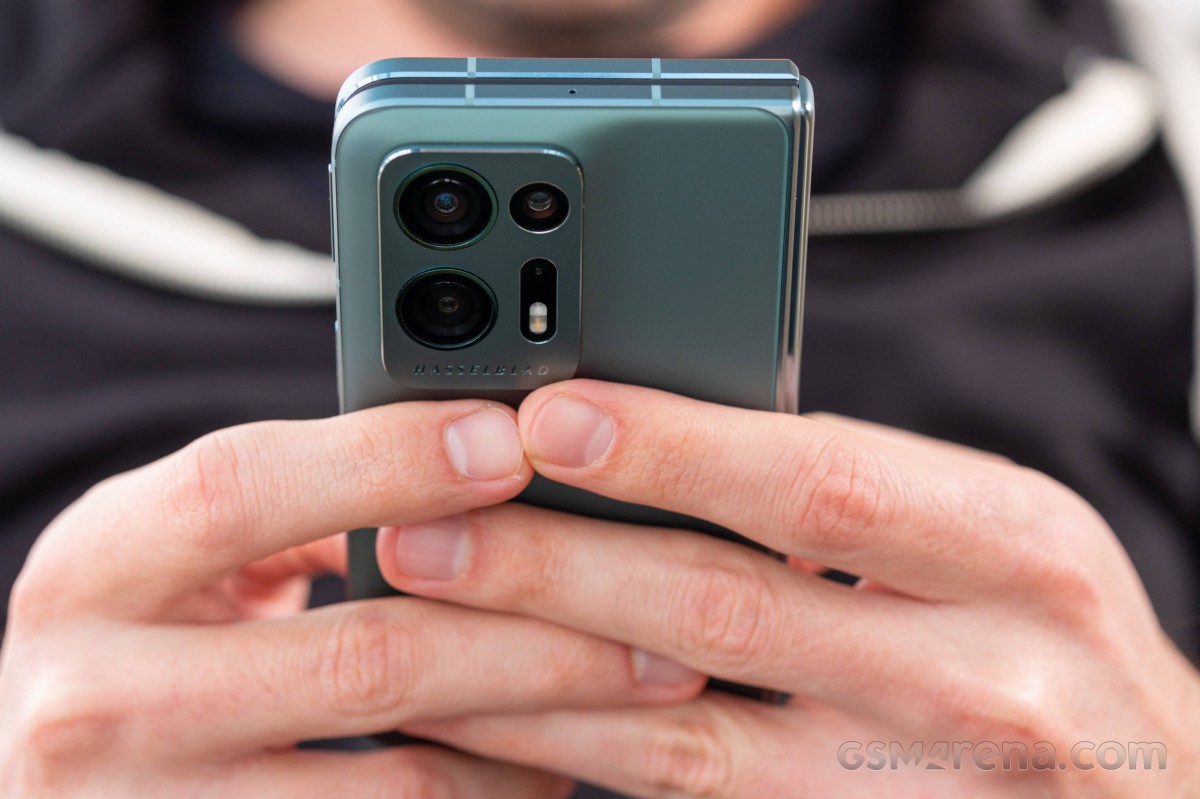 A point can be made that other large foldables aren't as narrow as the Fold and give you an even better platform for texting - like the Mix Fold 2 or even the entirely conceptually different Huawei Mate Xs 2. But those are way taller (and, by extension, ultimately a lot larger) than the Find N2.

So in the realm of 'large' foldables, the Find N2 remains the most compact one physically, without really sacrificing usability in its smartphone state - on the contrary, it's even arguably better than the 'benchmark' Galaxy Z Fold4. 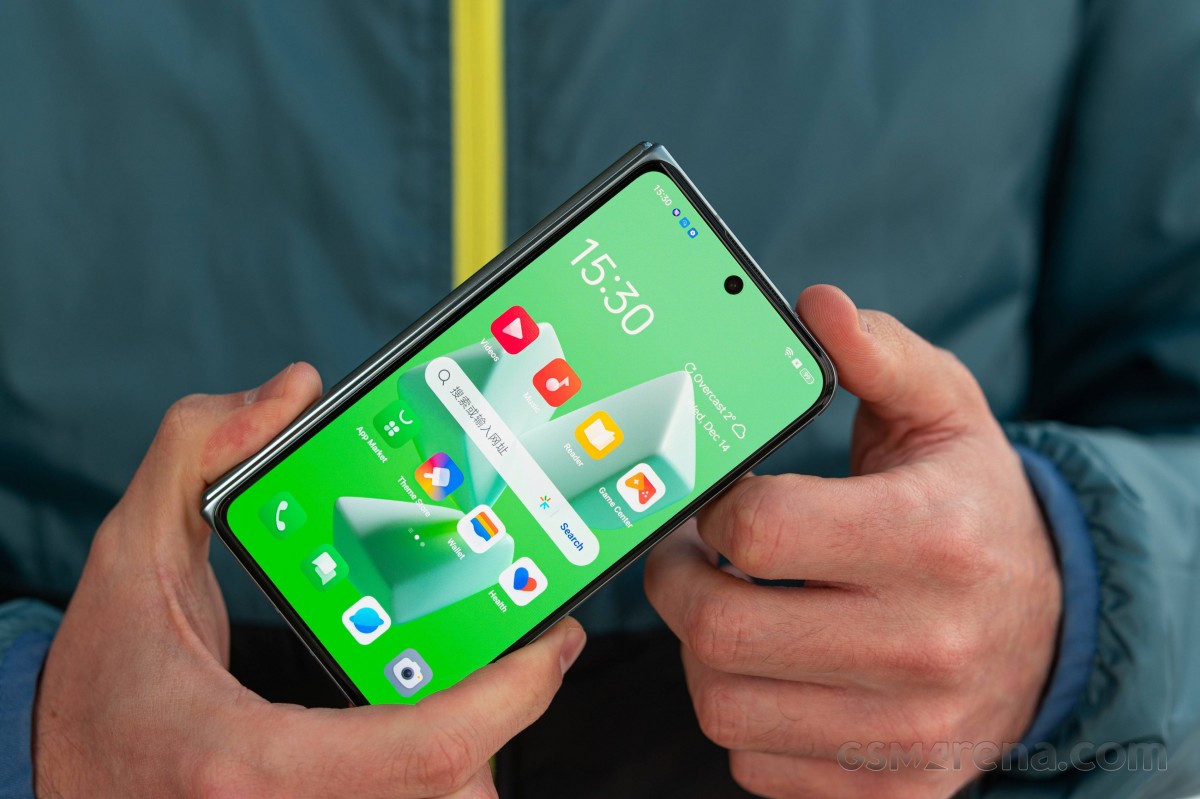 Admittedly, we've only been talking about the footprint, essentially, and for all its compactness in two of the dimensions, the Find N2 remains sort of a tiny chonker if you were to compare it to a conventional bar smartphone. But at 14.6mm around the waistline, it's substantially thicker than some foldables too, like the Mix Fold 2 or the Mate Xs 2 (both just over 11mm). And that's after Oppo managed to reduce the thickness from the previous generation's 15.9mm. 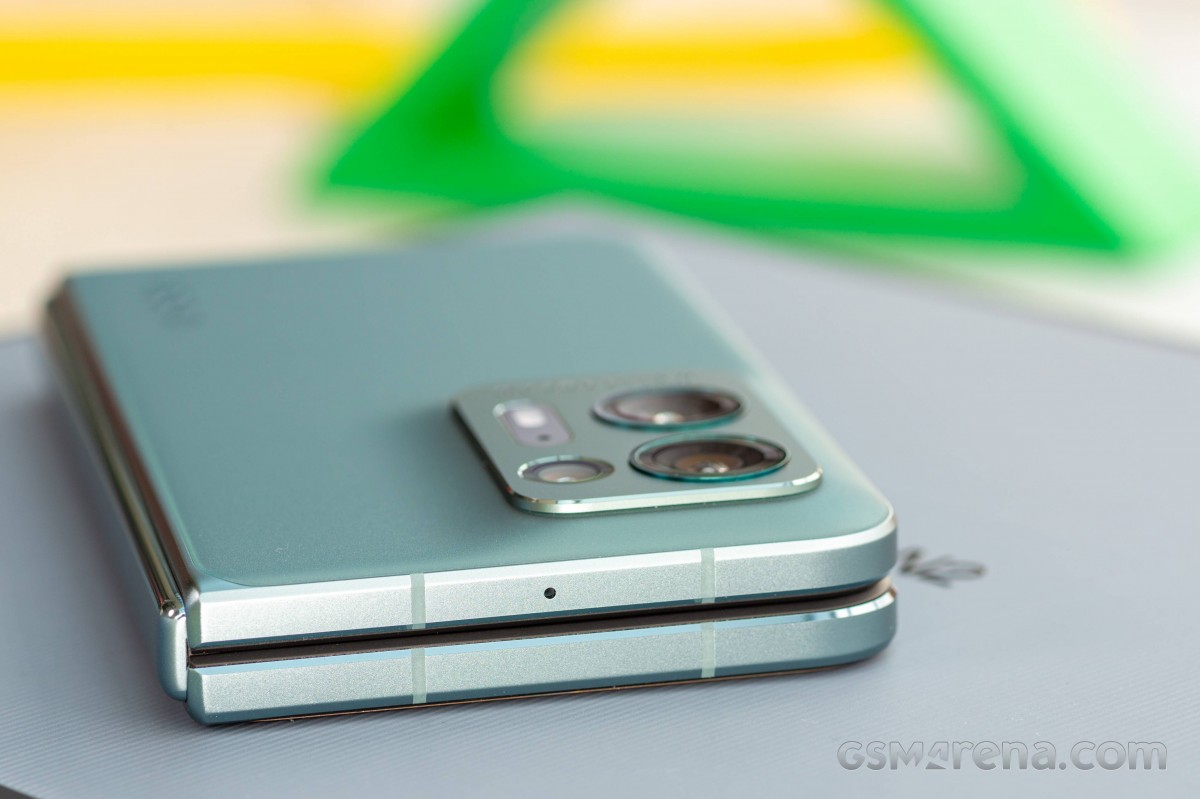 A comparison against the Fold4, on the other hand, does make the Find N2 look a lot better. The Galaxy's folded thickness varies between 14.2 and 15.8mm and the Find is in the lower end of that range. Plus, it folds onto itself without any visible gap between the two halves, an ever-present eyesore on the Samsung foldables. 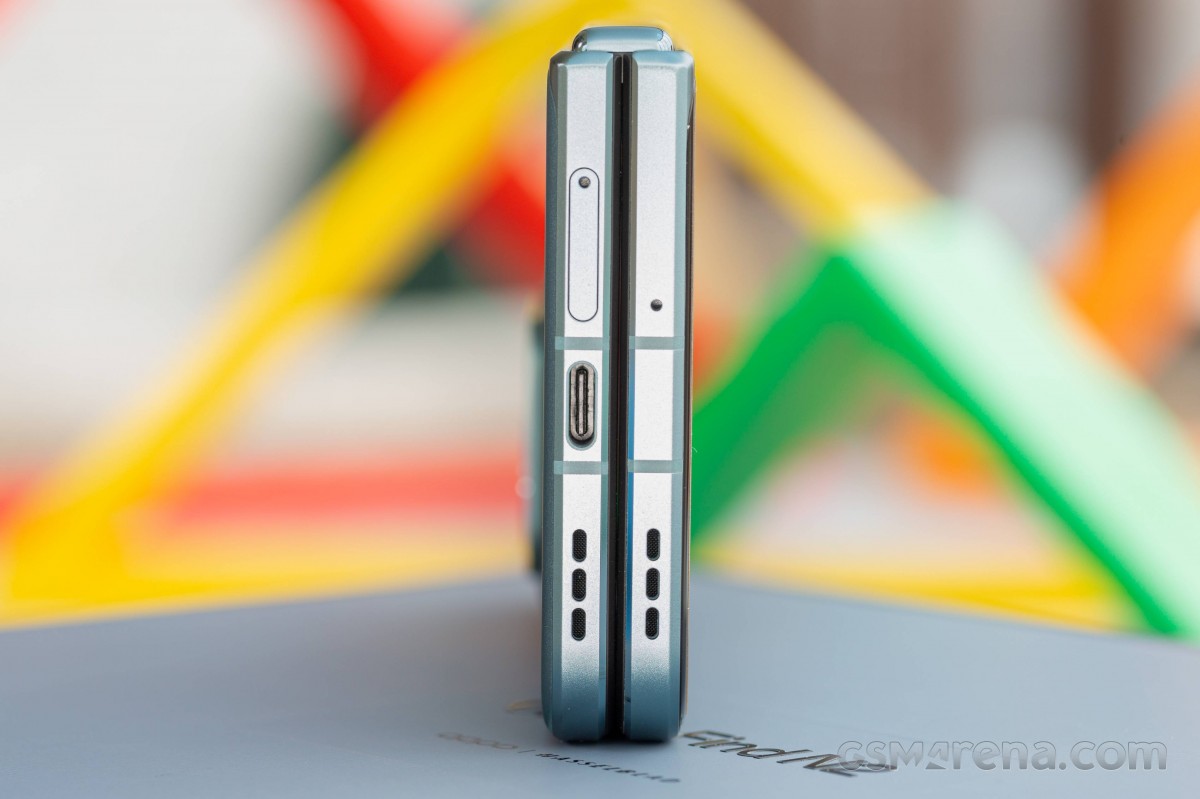 But size is only half of the pocketability story. The other aspect is weight, and the Find N2 easily wins here. Oppo says the new model is 42g lighter than the original, and that's quite the feat. The numbers require some explanation though, and to get there, we need to talk materials and color options first.

The Find N2 is available in three colorways, and the White and Green ones have Gorilla Glass Victus backs and those versions are specified to weigh 237g. The Black one comes with an eco-leather rear panel, which makes it 4g lighter at 233g, and that's what the press materials base the 42g weight reduction on.

There's another small caveat in that these numbers typically don't include screen protectors on either display, and while you could remove the plastic sheet from the outer one, the inner panel wouldn't be too happy to receive that treatment. Point being that our glass-backed Green review version tips our scales (admittedly not one bit standardized or calibrated) at 242g.

But that's not half bad, really. Our Fold4 review unit shows 268g on the same scales, so the Find is still lighter by a tangible margin. And when you consider that (on paper) an iPhone 14 Pro Max is 240g and the Galaxy S22 Ultra is 228g, with the Find you're getting a phone and a tablet in essentially as much weight as a large phone. 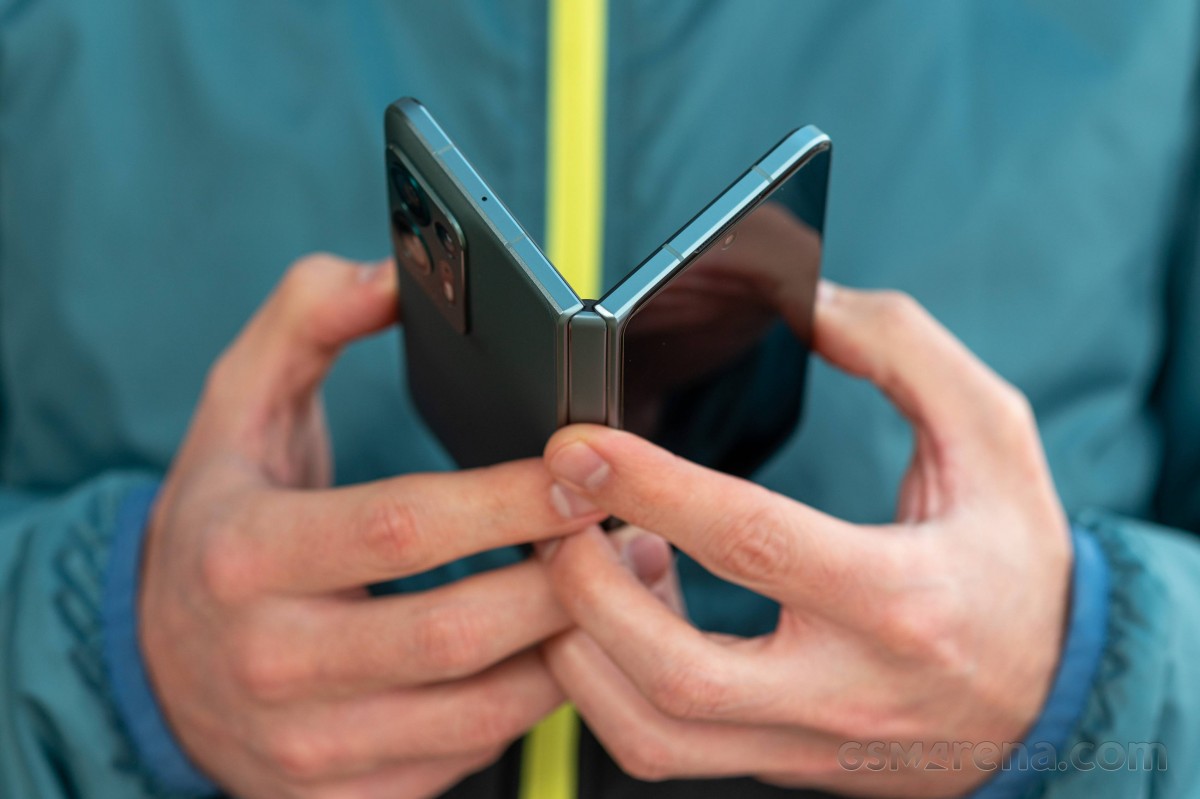 Going from phone to tablet is a pleasing and trouble-free operation - a notable step up from the previous generation. You could attempt to do it single-handedly, but it neither looks nor feels right, and you'll need help from the left hand - use both hands, to begin with, please.

The now flat frame gives plenty of gripping area, and you can open the thing without even wedging your fingertips between the two halves - something you can absolutely do as well, thanks to the frame's chamfered edges. 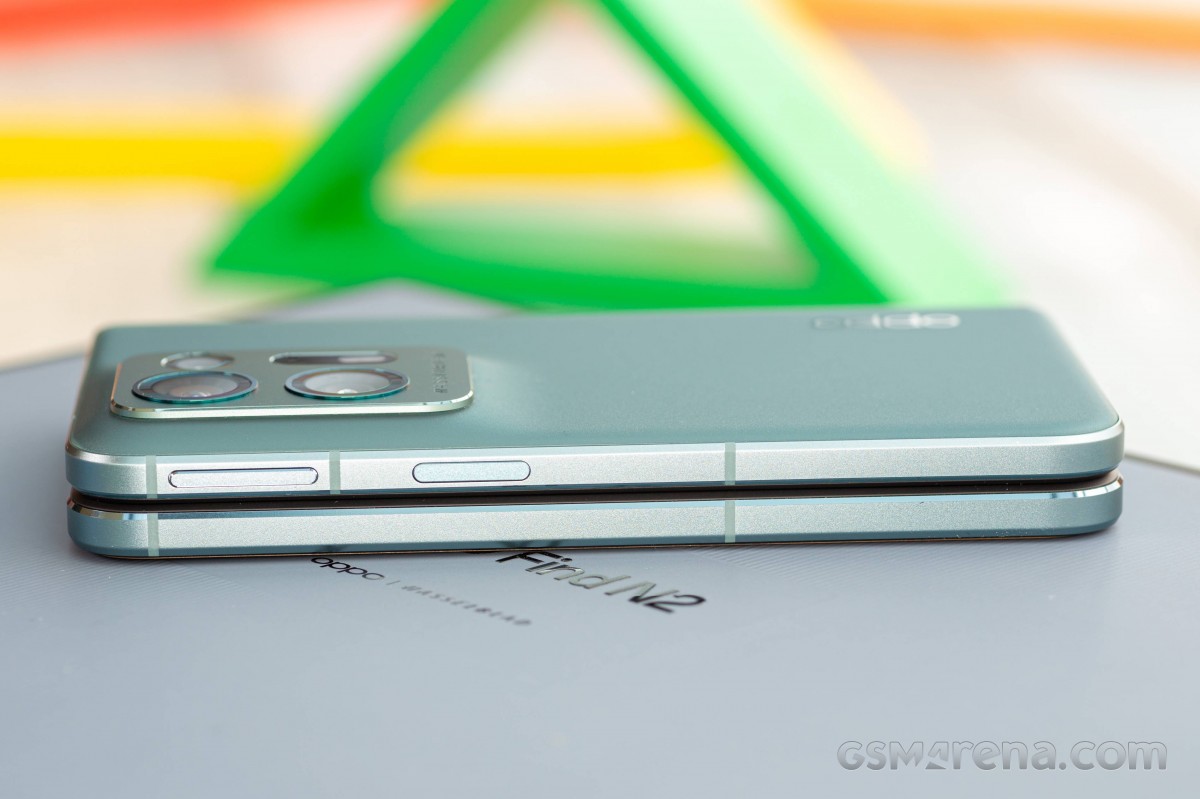 The weight of the springs in the hinge is such that it doesn't feel like the phone is fighting you - it complies while providing just the right amount of resistance. It's also designed to stay at any arbitrary in-between angles in the 45-to-125 degree range, enabling use cases like a 'tripod' mode for self-shooting from a table or waist-level photography with the viewfinder parallel to the ground. 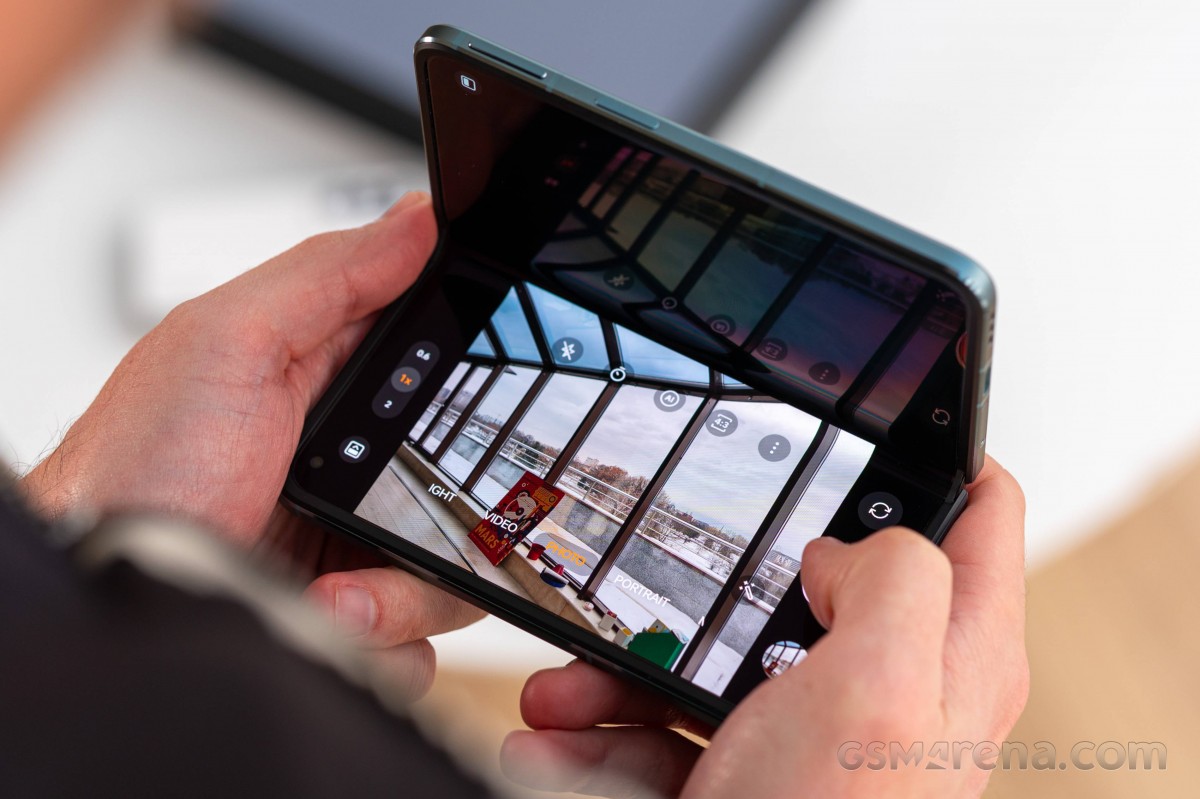 Oppo will tell you that they've brought the number of parts inside the hinge to 100 - 38 down from the previous design, which has partly contributed to the weight reduction. This second-generation Flexion hinge uses carbon fiber and aviation-grade alloys and has been rated to 400,000 actuations.

The hinge design is also instrumental in providing the no-gap closed state of the Find N2 - yet another foldable that achieves something Samsung's been refusing to do for one reason or another. The display forms a droplet shape inside the body, which allows it to survive the process. 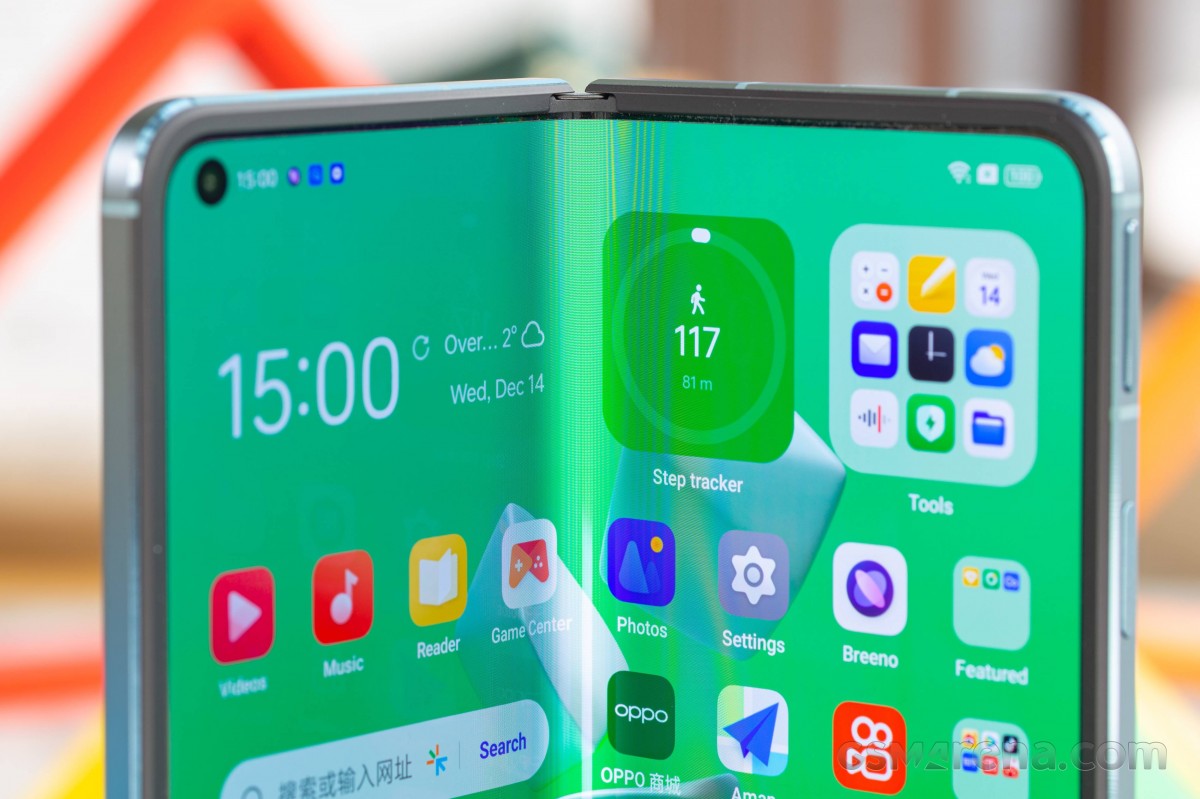 When unfolded, the Find N2 manages to maintain an almost creaseless surface along the center line. We can't help but wonder, however, if the original Find N did it that one extra bit better. In any case, even this arguably slightly less flat Find N2 is smoother and flatter than virtually any rival. 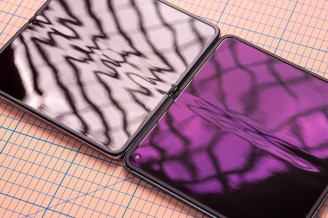 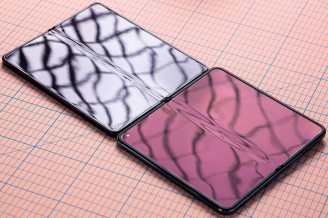 In this state, you're getting a nice tiny 7.1-inch tablet with a squarish aspect ratio - more or less the same aspect ratio as the other large foldables. But the differences here are two-fold. For one, the Find N2 unfolds into a landscape orientation - squarish as it may be, it's still wider than it is tall. You could argue that with the other foldables, you can simply rotate and have a landscape orientation, but on the Find, you end up there naturally, with one fewer action. 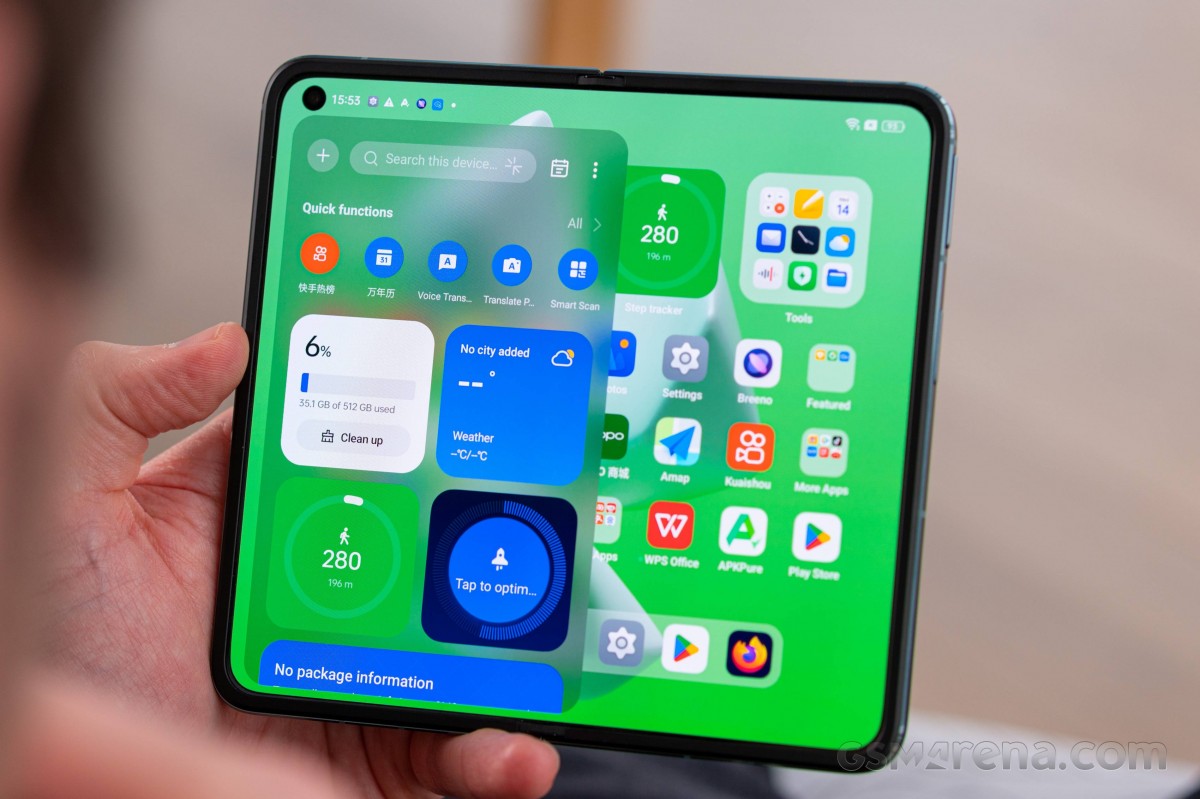 And the other thing is, once again, weight. The Find N2 is simply lighter and more comfortable for longer use than any of the other potential competitors. It's small enough to almost make it look odd when held with both hands. 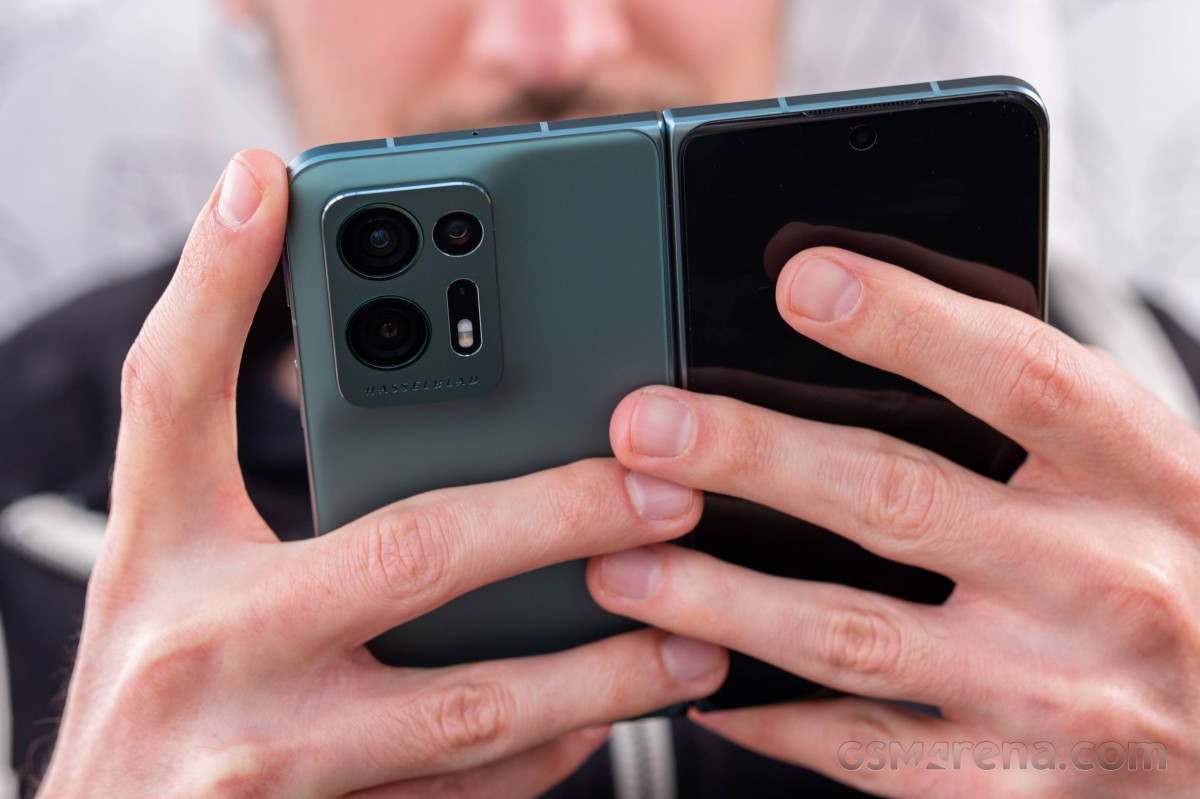 It's not all roses on the Find N2, however. One of the unexpected changes coming from the previous generation is the relocation of the volume rocker from the 'front' half to the back one when thinking of it as a smartphone and from the left to the right when in tablet configuration. One use case where we found this detrimental was for double pressing the volume rocker to launch the camera - it's nowhere as convenient as it was on the Find N(1).

The fingerprint reader, embedded in the power button and placed in more or less the same location as before, remains a fast and reliable solution for unlocking. 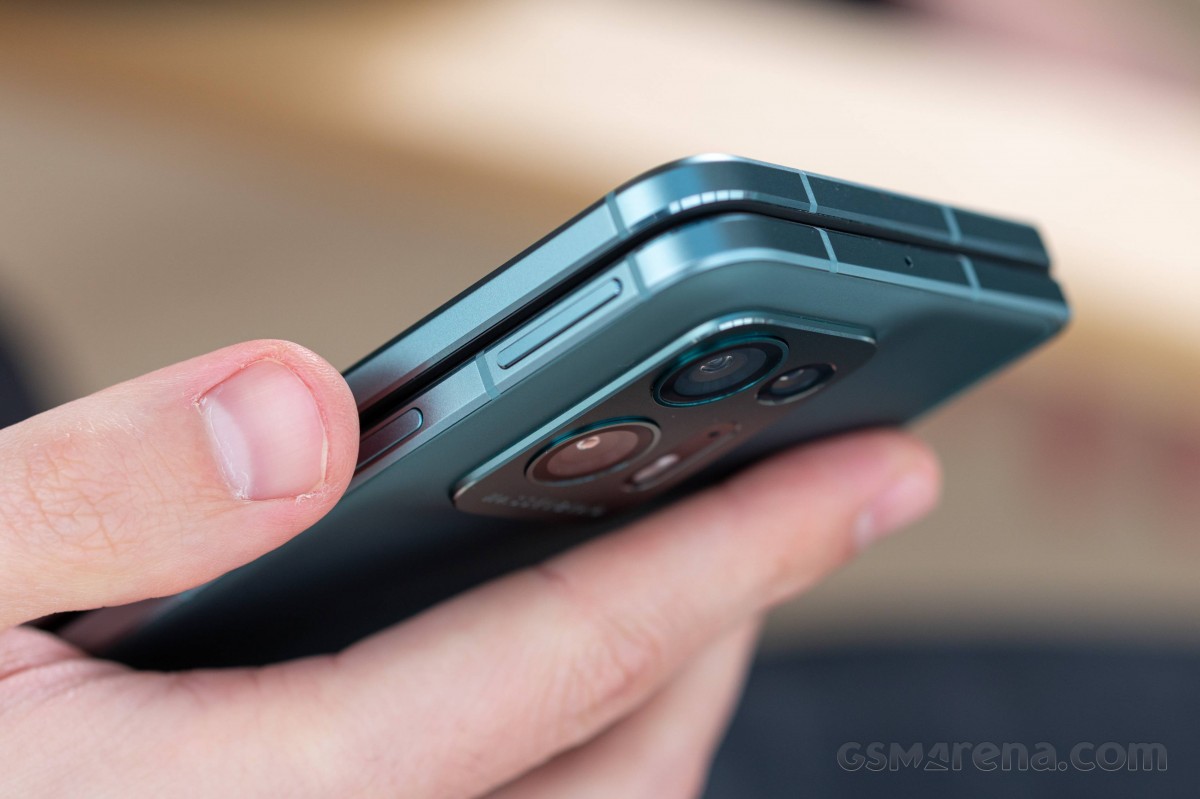 The other not so great bit about the Find N2, and possibly the only hardware area where it trails the Galaxy Z Fold4 that we've been mentioning over and over again, is the ingress protection. The last two generations of Galaxies are the only foldables with a true IPX8 rating, and the Find N2 isn't joining them. Sure, it has a gasket around the SIM card tray (dual nano, no microSD, as expected), and it will probably survive a splash or a few drops of rain (don't quote us on that), but it's not water-resistant. 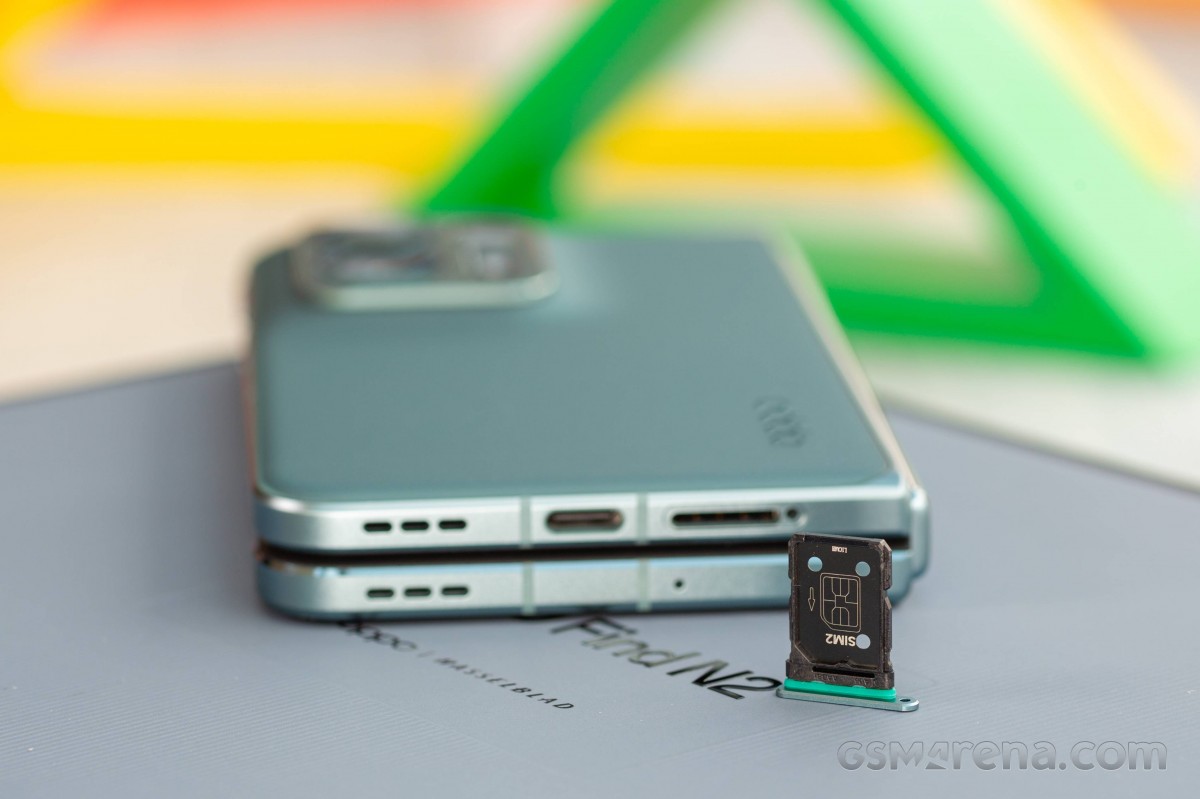 Same rear camera setup as the Oneplus 11 on this. Will be interesting to see if the image processing from Oneplus in combination with the newer Snapdragon 8 gen 2 chip is much different than this phone.

To be fair when I asked oppo care and told them I was mad the fold N2 wasn't coming to the UK they replied That it wasn't announced.........YET