The typical slab that is the 2018 smartphone can't be radically changed as we are not that into the future yet. But if someone can make it intriguing again, well, there is no doubt it will be Oppo. The phone maker who once impressed us with its N series devices and their swivel camera modules is now back at it. 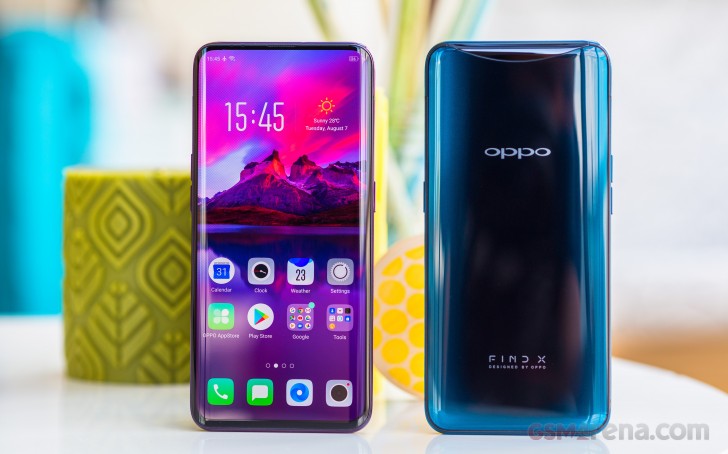 One glimpse of the Find X is enough to know this is not your boring smartphone. So what's different? It has an entirely bezel-less screen, yes, but it's not like this is a first. The sleek glass-sandwich design isn't the novelty that tickles our brains either. What is it then?

There isn't a single visible camera anywhere on the Oppo Find X! The lack of those two or three camera spots makes for an incredibly clean design.

The front is all screen. 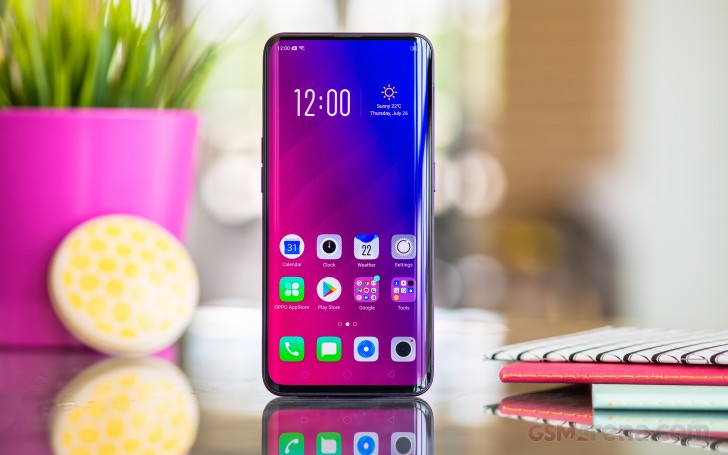 The back is all glass, no interruptions whatsoever. 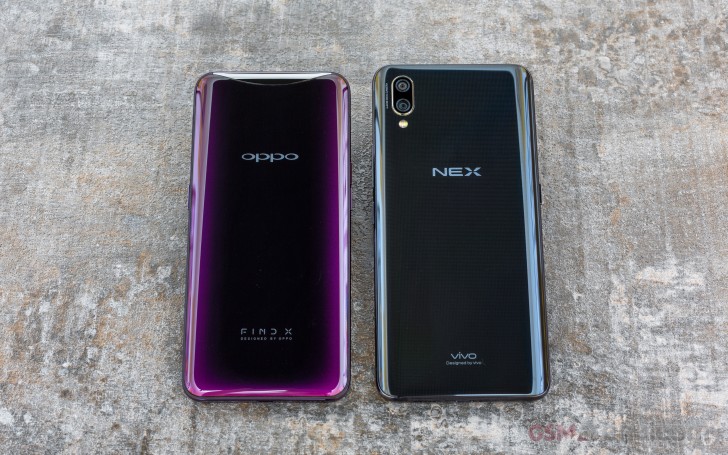 Oppo Find X next to the vivo NEX S

One very thin metal frame holds those pieces together. And that's the Oppo Find X. If only Oppo didn't stamp the back with those logos, the Find X looks could have been as close to a natural crystal as possible. 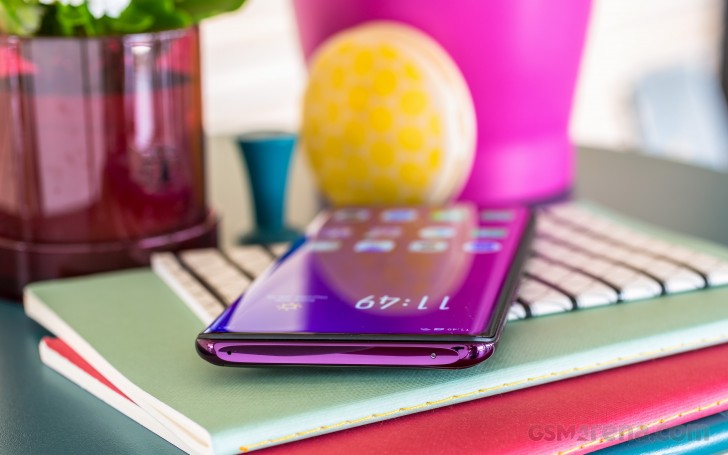 There is more to the Oppo Find X, a lot more actually.

Now let's take a closer look at the front. A curved Gorilla Glass 5 piece covers everything, and the 6.42" AMOLED screen with those curved sides looks a lot like the Galaxy S9's. There is one very tiny bottom bezel, while the other bezels are pretty much non-existent. 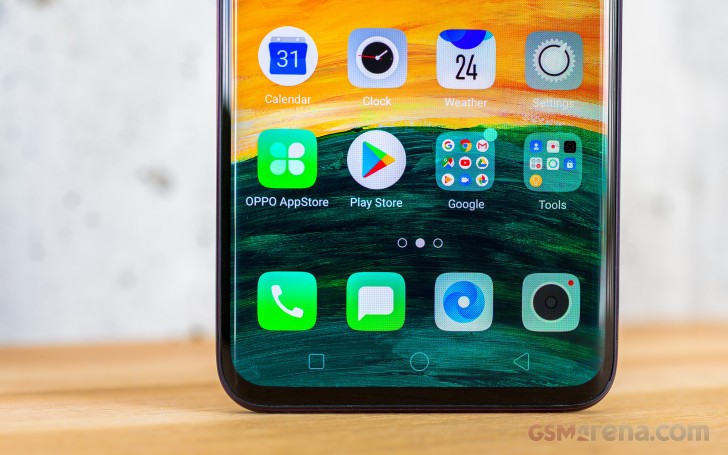 No, wait, Oppo still managed to fit this super thin grille above the screen. But it did hide the ambient light sensor beneath the AMOLED panel somewhere in the upper right corner. Where is everything else then? 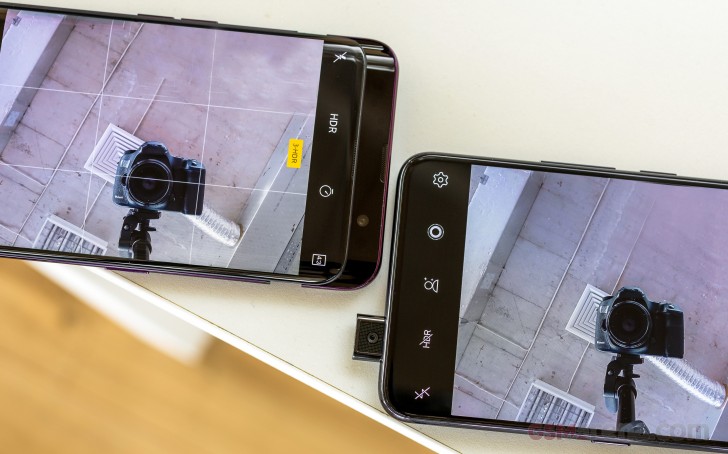 It's all housed in the slide-out module. But it's nothing like the vivo NEX S - Oppo chose to pop up the entire top of the phone. And there is a reason for that - the module doesn't just contain the selfie and the rear snappers, it also has the mini-Kinect tech Apple first used for 3D facial scanning. Oppo uses structured light like the iPhone X does and projects 15,000 dots that help it read your face in three dimensions with "millimeter-level" accuracy. The company calls this O-Face (not the best name, we know).

Oppo brags about the reduced false positive rate compared to fingerprint readers - 1/1,000,000 instead of 1/50,000. And there is a reason for this boasting - the Find X, just like the iPhone X, lacks a fingerprint scanner. Oddly, this is the same rate as Apple's, even though Oppo's X uses only half as many points. 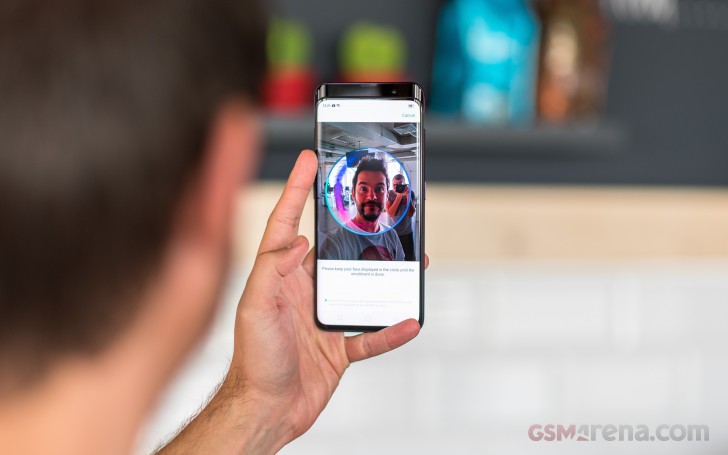 This incredibly accurate (twins excluded) mini-Kinect tech is what made the iPhone X notch one of the physically widest on the market. But while other makers made fun of Apple and claimed their notches are narrower (duh, they lack the mini-Kinect tech), Oppo just one-upped them all.

The actual earpiece grille is also on the slide-out platform - the grille on the front glass is just a hole to let the sound through. 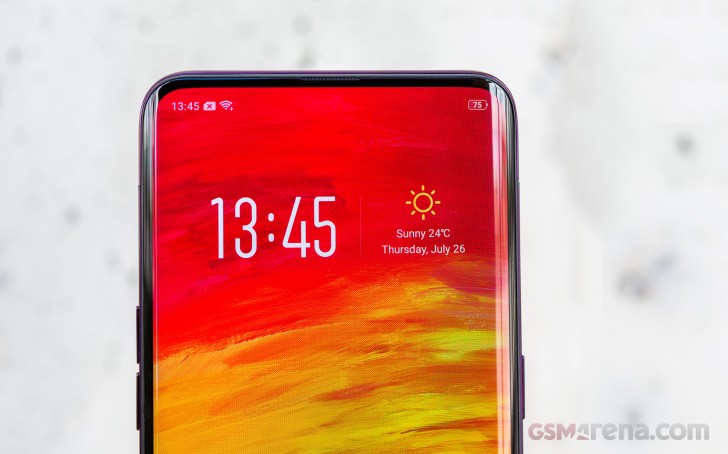 The other two cameras on the Find X are mounted on the rear of the slide-out tray - a 16 + 20 MP setup and its single-LED flash. 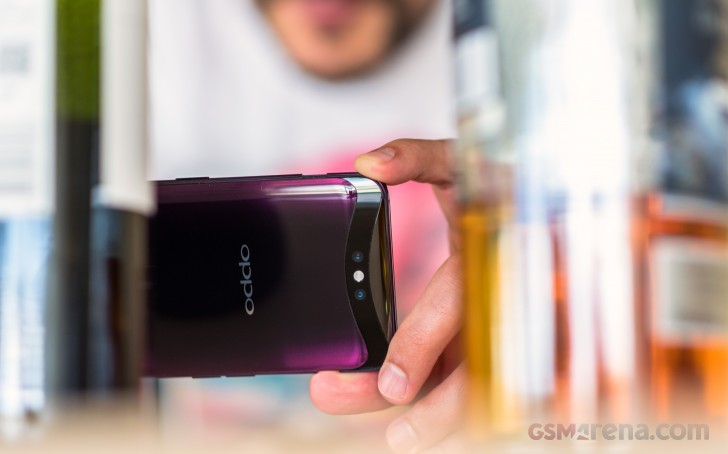 The pop-up module needs about 0.5s to slide out - faster than the vivo NEX S, but that's still time spent waiting each time you want to unlock your phone. That said, the system works surprisingly fast - maybe even faster than Apple's, which is a huge achievement for a pop-up tech.

The whole back of the Find X is another curved Gorilla Glass 5. Its rounded corners and sloping sides help the special coating to reflect light from different angles, which further reinforces the crystal-like appearance. There are two color gradient options to choose from: Bordeaux Red and Glacier Blue. 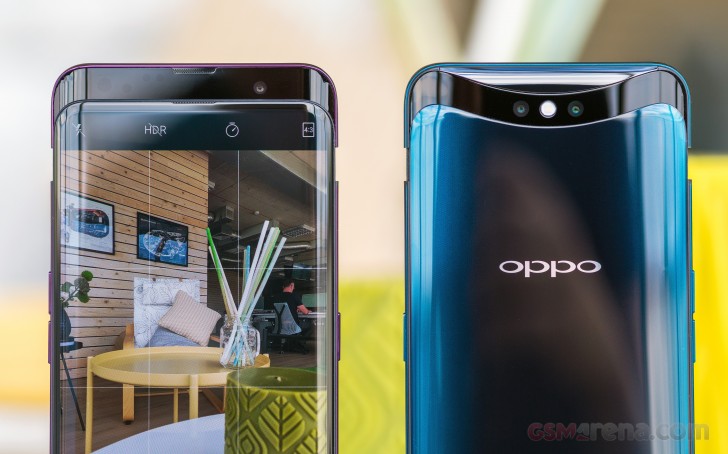 There is one issue of course - all that rounded glass doesn't offer a ton of grip. Or any for that matter. The Find X is one of the slipperiest phones we've handled in a while, but we guess that's a price worth paying for getting one of the most beautiful smartphones there is. 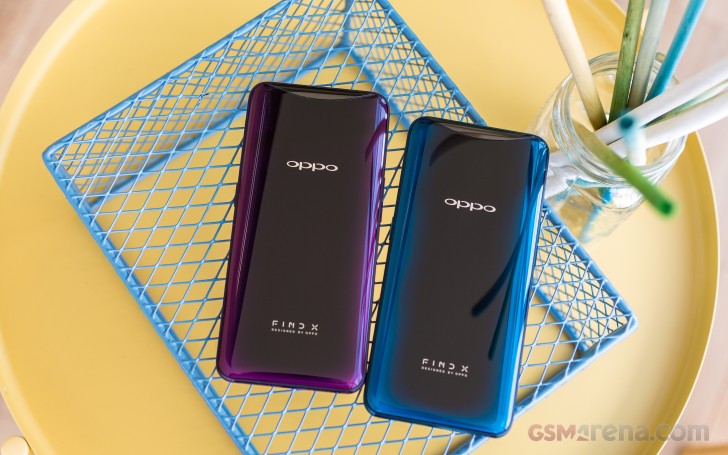 By the way, Oppo managed to stack both nano-SIM cards, so the SIM tray is quite small, and yet it's a dual-SIM one. There is no support for microSD card though, and there is no audio jack either on the Find X. 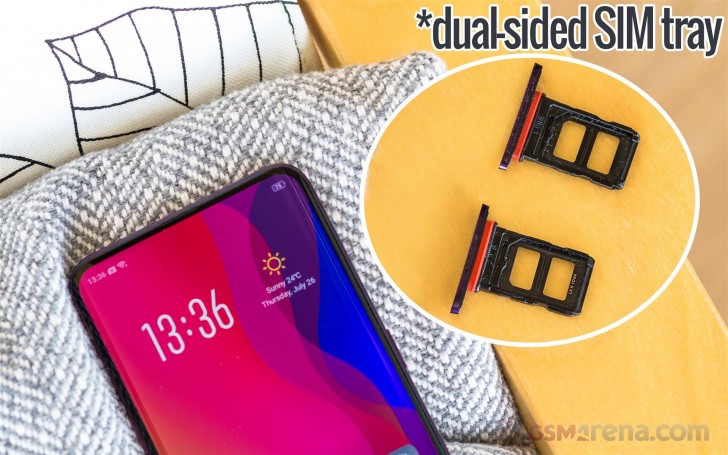 Oppo has made one of the most stunning smartphones we have ever seen, there are no two ways to put that. It may lack gold and diamonds, but this is one jewel of a smartphone. All of this at the price of a slippery and somewhat easy to break body.

One thing is clear - the Find X is not like the previous N phones. The N1 and N3 swivel cameras could have been labeled as gimmicks because they tried to overcome the selfie limitations in the past with unconventional methods. The Find X pop-up piece is way more advanced and contributes greatly to functionality and design instead of breaking them. Smart, fast, jam-packed with tech but seamlessly integrated - that's what makes the pop-up part one of the most impressive piece of tech we've seen in a while. 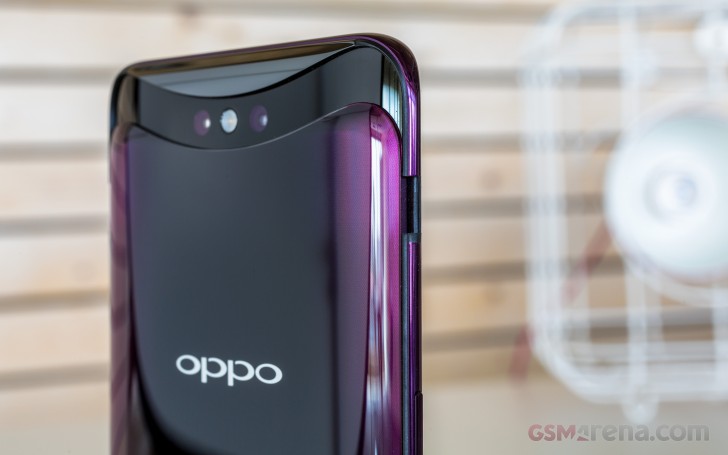 Finally, Oppo promises the pop-up mechanism has been tested to 300,000 slides and it's guaranteed to last at least that. Oppo calculates the average person unlocks their phone 100-150 times a day, so there shouldn't be any durability worries for at least five years. And, yes, you can force it down and it will automatically retract without you breaking anything. We are not so sure what would hapen if you drop the phone with the tray exposed and it hits the ground at an angle.

We've dropped a few on to marble floor and it survived