It seems every time a new Android flagship phone comes out, it almost certainly tops the charts on Chinese benchmarking platform AnTuTu. The latest one to do so is the recently announced Oppo Find X2 Pro which managed the highest score recorded on the platform at 637,099 points fueled by its Snapdragon 865 SoC. The phone also holds the top camera score on DxOMark and was recently granted an A+ rating from DisplayMate. 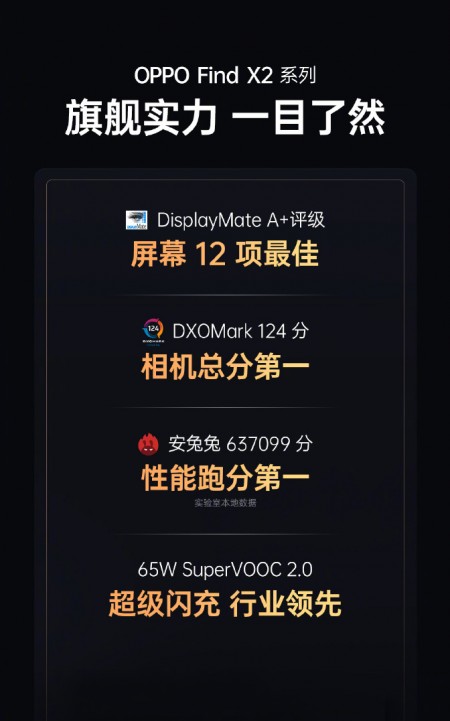 For comparison, the previous highest-scoring Android phone on AnTuTu was the Snapdragon 855+ powered Asus ROG Phone II with its 507,284 points. We’ve also seen the recently announced Black Shark 3 (620,952 points) and the still unofficial Red Magic 5G (633,724 points) post some impressive numbers despite not being in their final production forms.

Just yesterday all of AnTuTu’s apps (AnTuTu 3DBench, AnTuTu Benchmark, and AITutu Benchmark) disappeared from Google Play over privacy concerns linked to developer Cheetah Mobile. All of the benchmarking tools are still accessible from the official AnTuTu website but you’ll have to go the sideload route if you want to use them.

Current snapdragon 865 uses A77-based cores, next kirin will use A78 at best.

Kirin 990 won't be able to break it at all 500k max! but upcoming kirin 1020 will be the first SOC to cross 700k for sure due to 5nm process and latest A79 cores(in development currently)