An elaborate piece to manufacture, the Oppo Find X5 Pro's ceramic back allegeldy takes 168 hours to make (a full week, non-stop?) over 45 different processes, of which 269 minutes and 14 processes are just for finishing - if we're interpreting the promo materials correctly. Available in Ceramic White and Glaze Black (ceramic only implied on this one), the Find sure is about as premium s they come. 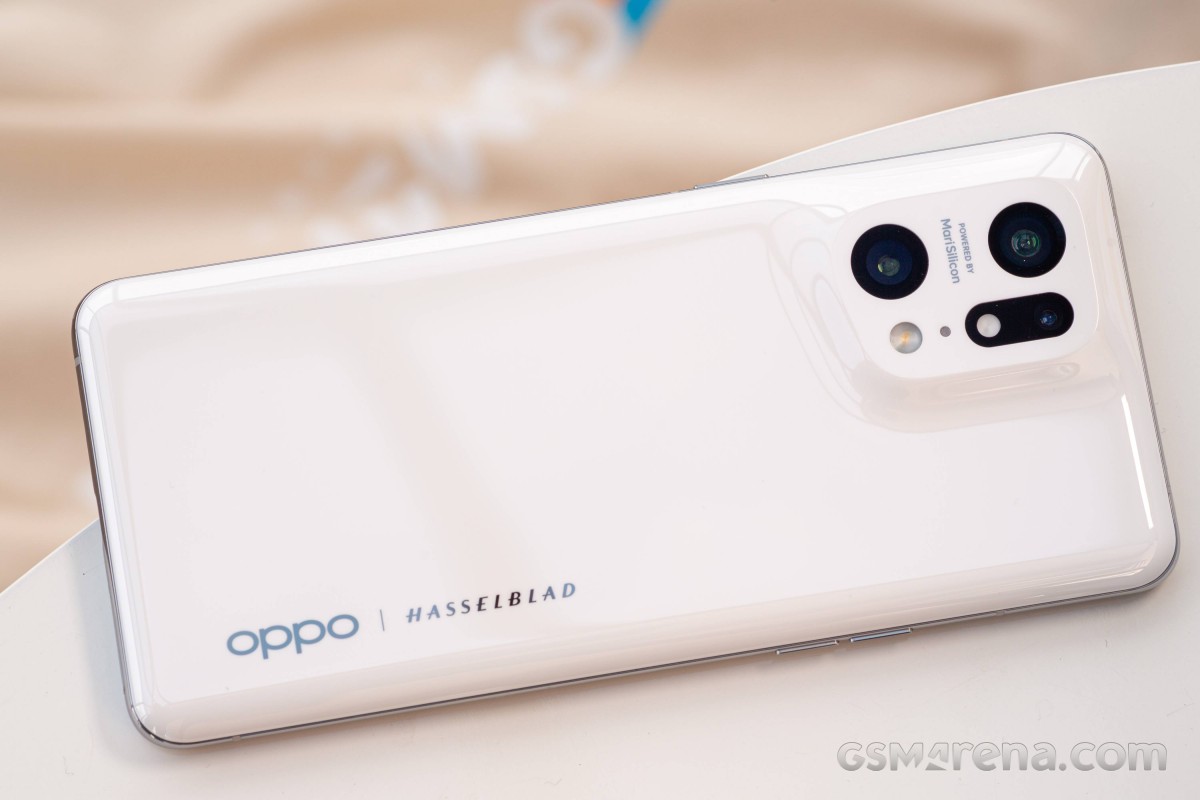 China also gets a third version with a pale blue faux leather back, but the global variant is limited to the two ceramic options. In a way that makes the 5 just like the 2 - back in 2020, you could have the Find X2 Pro with ceramic or leatherette back panels. The Find X3 Pro, meanwhile, was glass front and back. In case it wasn't clear - there's no '4' generation of Find Xs because of China's cultural aversion to that specific number. 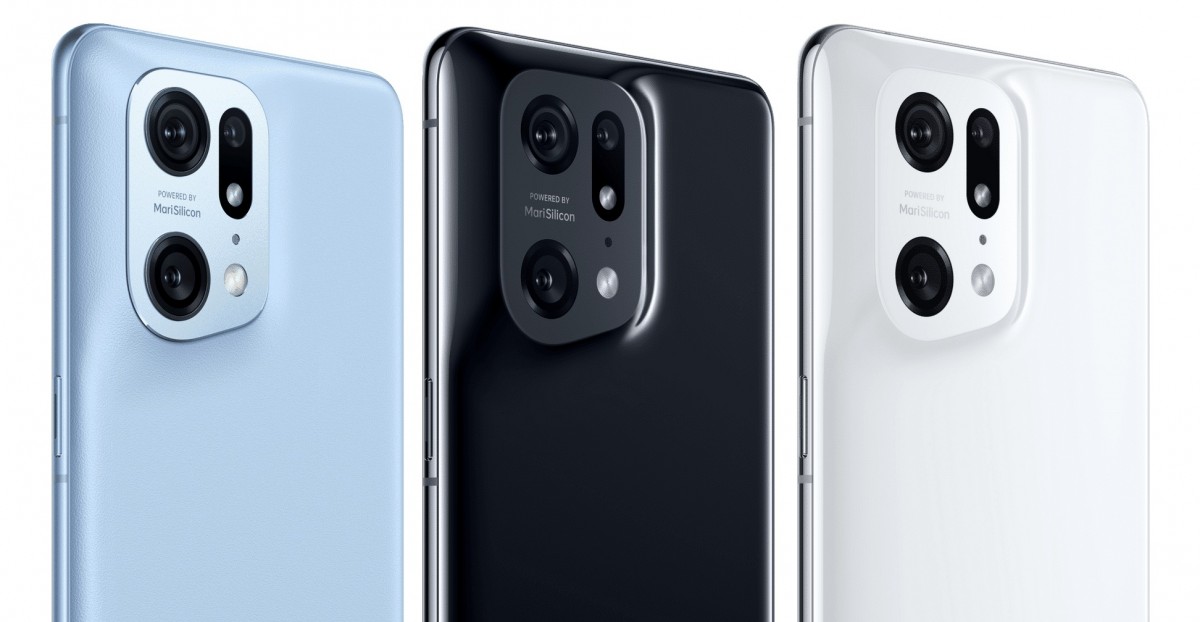 Perhaps this is an appropriate point to mention that the blue leather version is a good 23g lighter at an already sizeable 195g, and the ceramic ones tip the scales at 218g. While that's pretty hefty, key competitors like the iPhone 13 Pro Max (240g) and Galaxy S22 Ultra (228g) are even heavier, so we won't be lamenting the lack of the leather option outside of China. 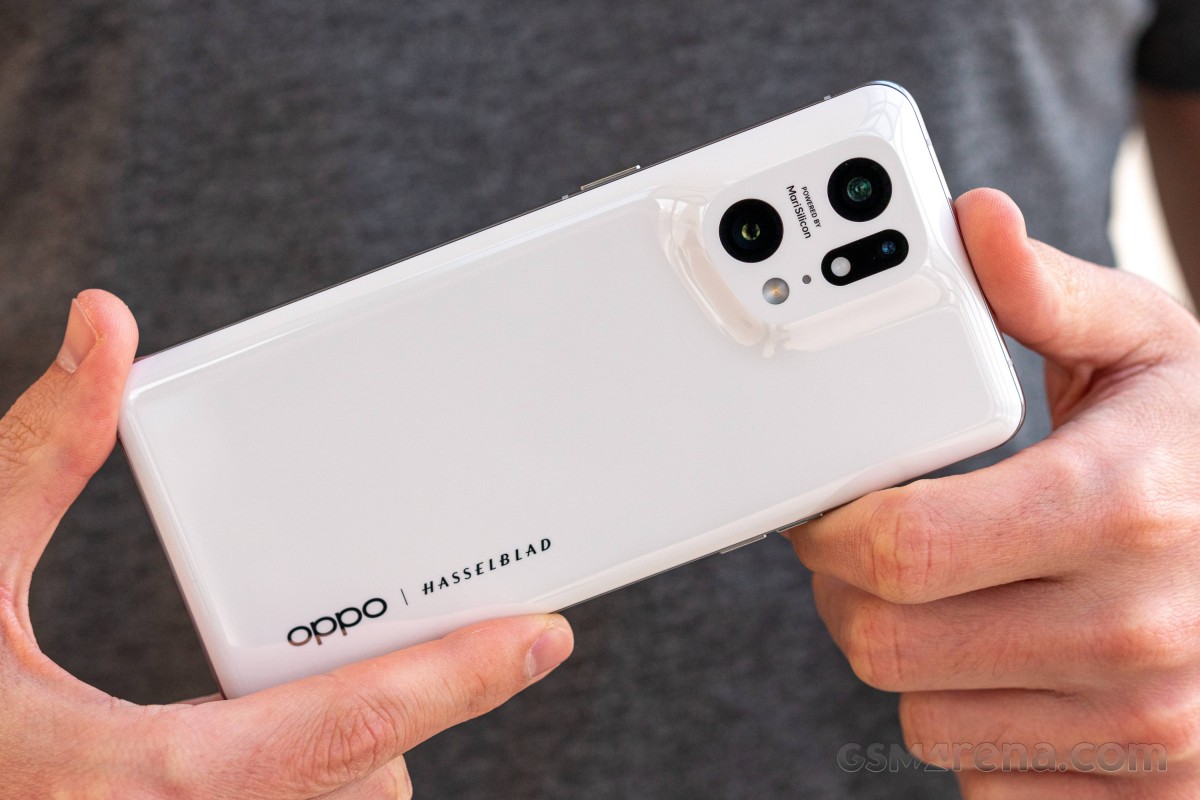 Having said that, if you're after a lighter Find, the non-Pro X5 is there for you, though you'll have to make some concessions in the build (on top of the internal differences that are a separate topic). Most notably, that would be the lack of an IP rating (the Pro is IP68-rated) and a more slippery, if still appealing in its own right, frosted back surface. 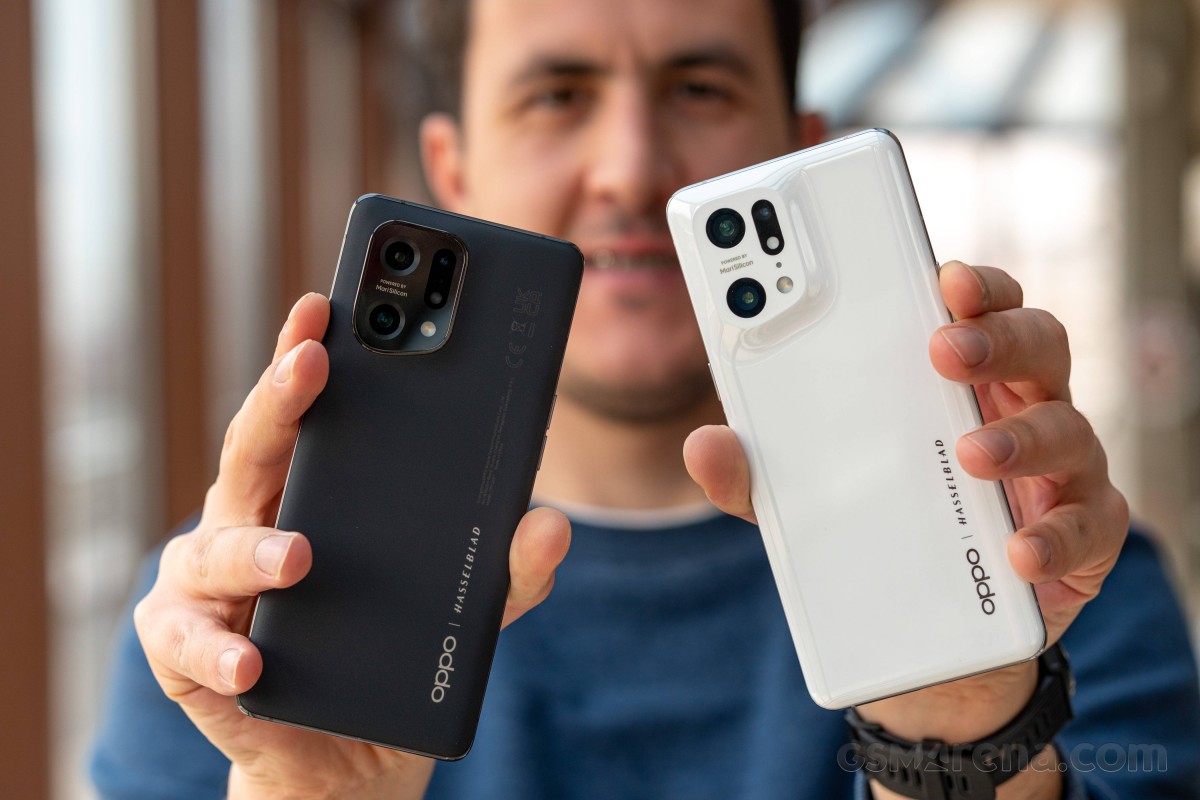 At just under 200g, the Find X3 Pro, too, is lighter than the X5 Pro, so you'd be forgiven to think that the 25g generational increase in weight is caused by the back panel's material swap only. It's not though - there's a larger battery that can share some of that responsibility (5,000mAh vs. 4,500). 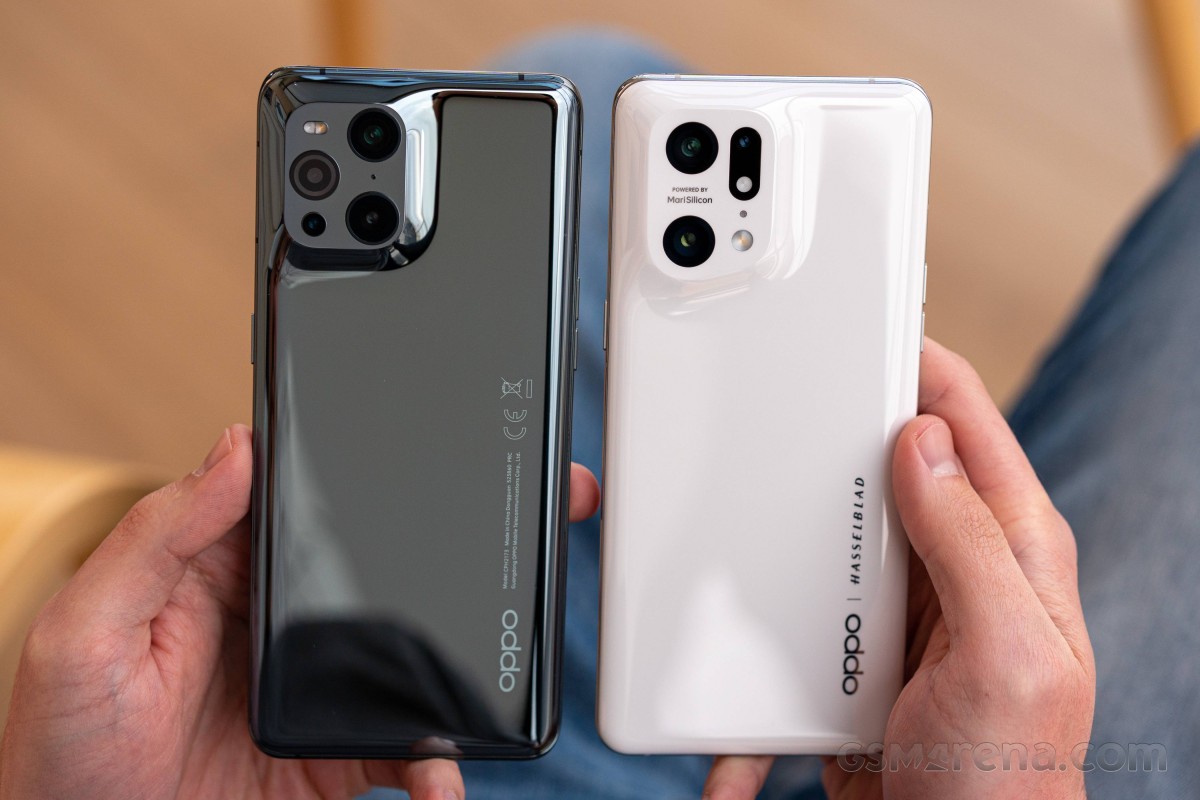 Enough about weight though, on to look and feel. Ceramic-backed phones tend to have this specific aura of density and stiffness - in a good way - that glass doesn't quite match. The Find X5 Pro is no different, and we'd say it outpremiums your average S-series Galaxy, for example.

With twice the hardness of glass, the Find's back panel should be more durable, particularly in terms of scratch resistance, when compared to glass backs, Gorilla Glass Victus as they may be. 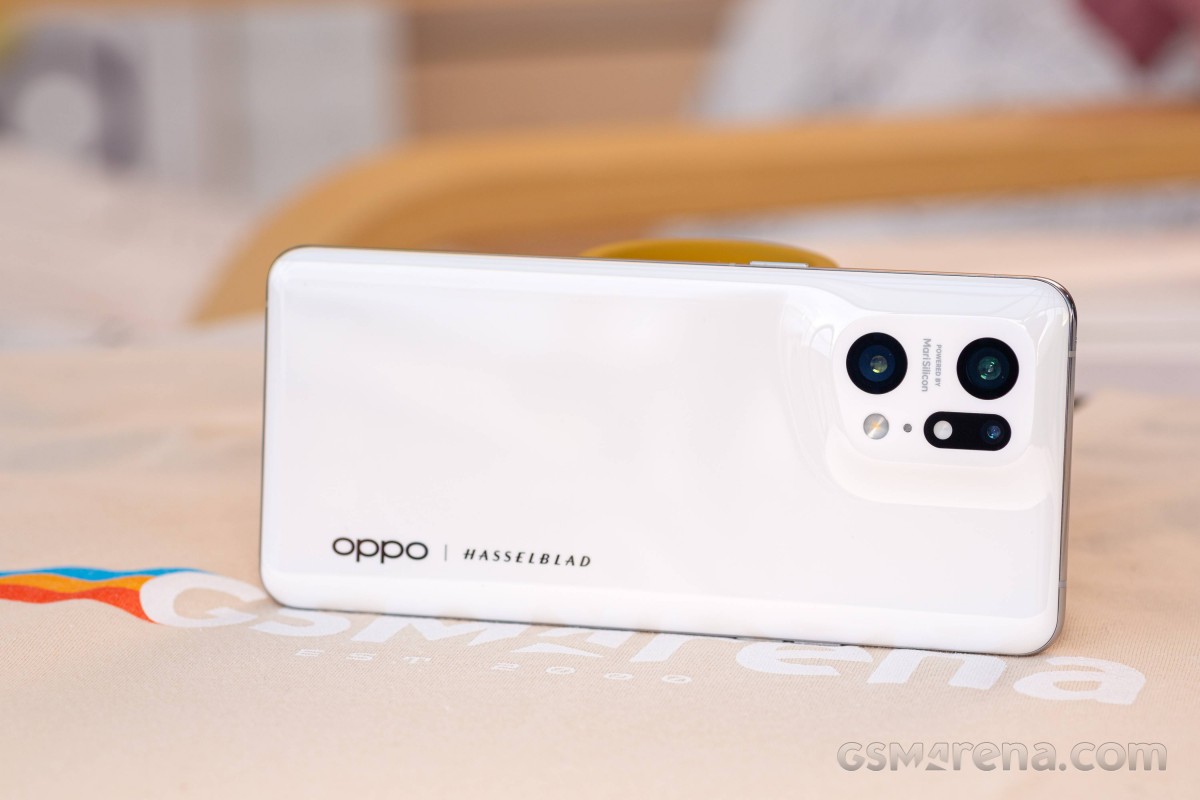 The panel will pick up smudges after coming in contact with the skin of your fingertips, but the white colorway of our review unit makes them all but disappear - you need to have light reflecting off of it and directly into your eyes to spot the fingerprints. We can imagine that the black version will be much more prone to advertising smudges. 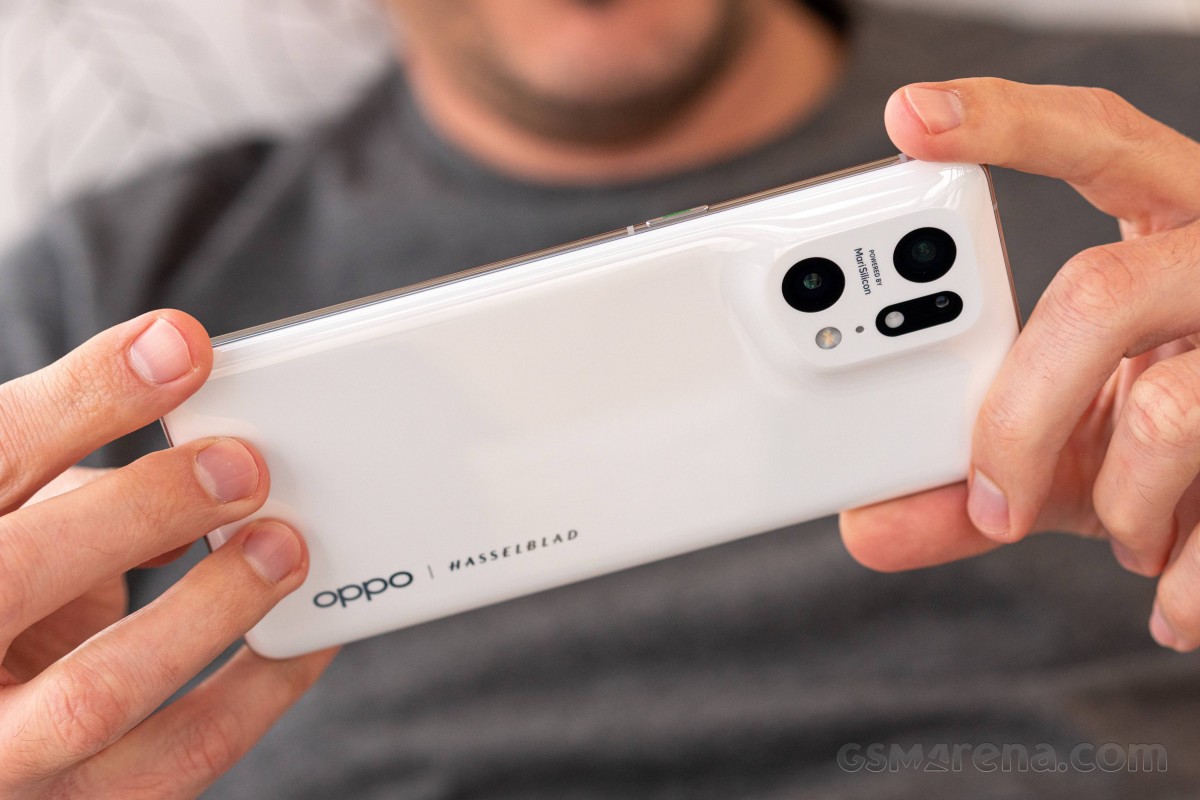 The gently sloping camera island of the Find X3 Pro was somewhat polarizing last year, but the design has matured pretty nicely. 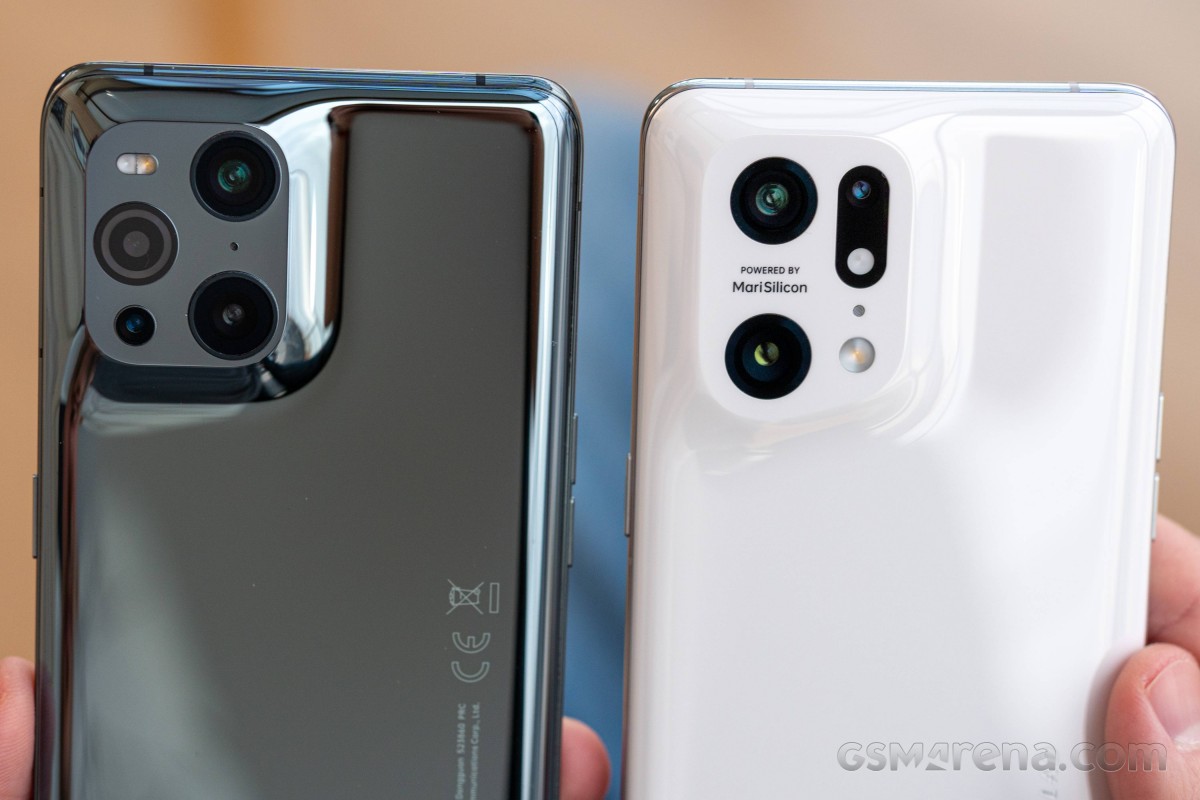 Now even more flowingly shaped, the camera bump blends with the back in hard contrast to the deliberately accented assemblies on other phones. The slanted bottom end of the island helps accentuate that notion of fluidity too. 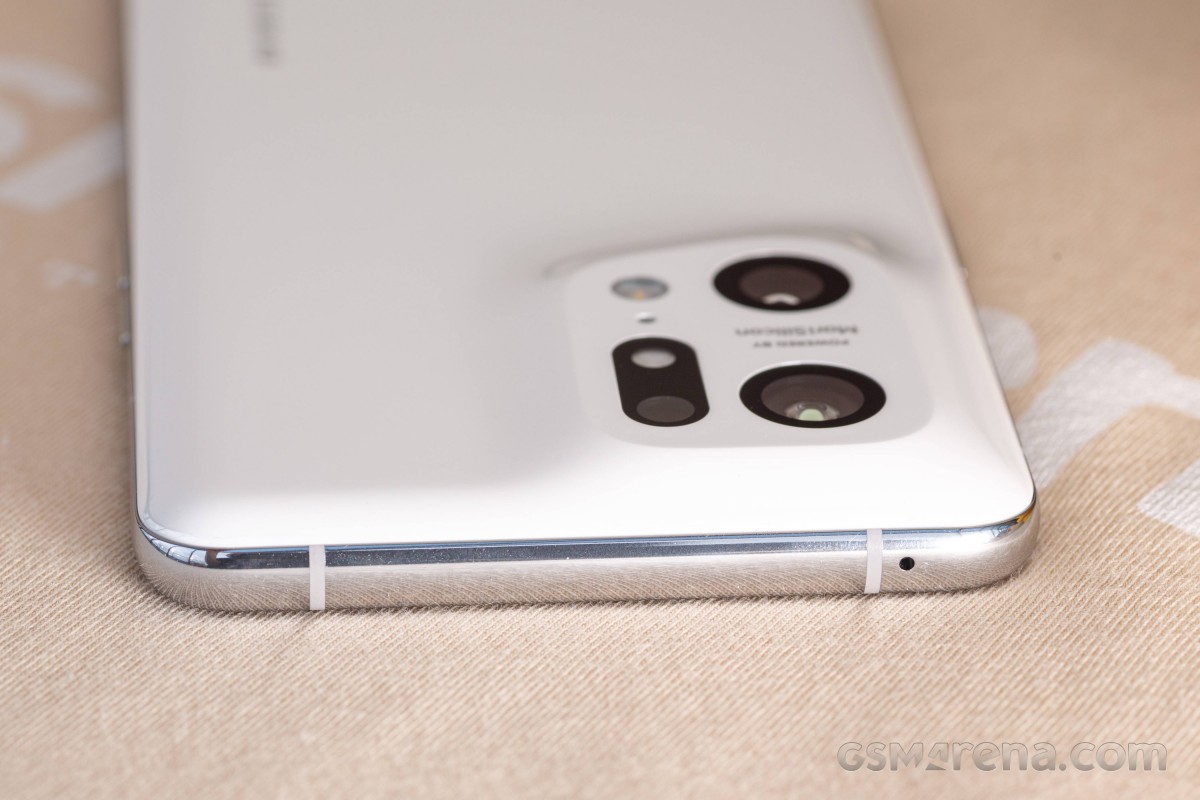 The black camera lenses can either be taken as an eyesore, in which case the black colorway would be a better option, or as a form-following-function accent. The two big-sensor modules, the main camera and the ultrawide, are on the left. Between them sits a shameless plug for the in-house MariSilicon image processing chip. The telephoto shares a window with a light temperature sensor while the flash and one of the three mics get separate cutouts. 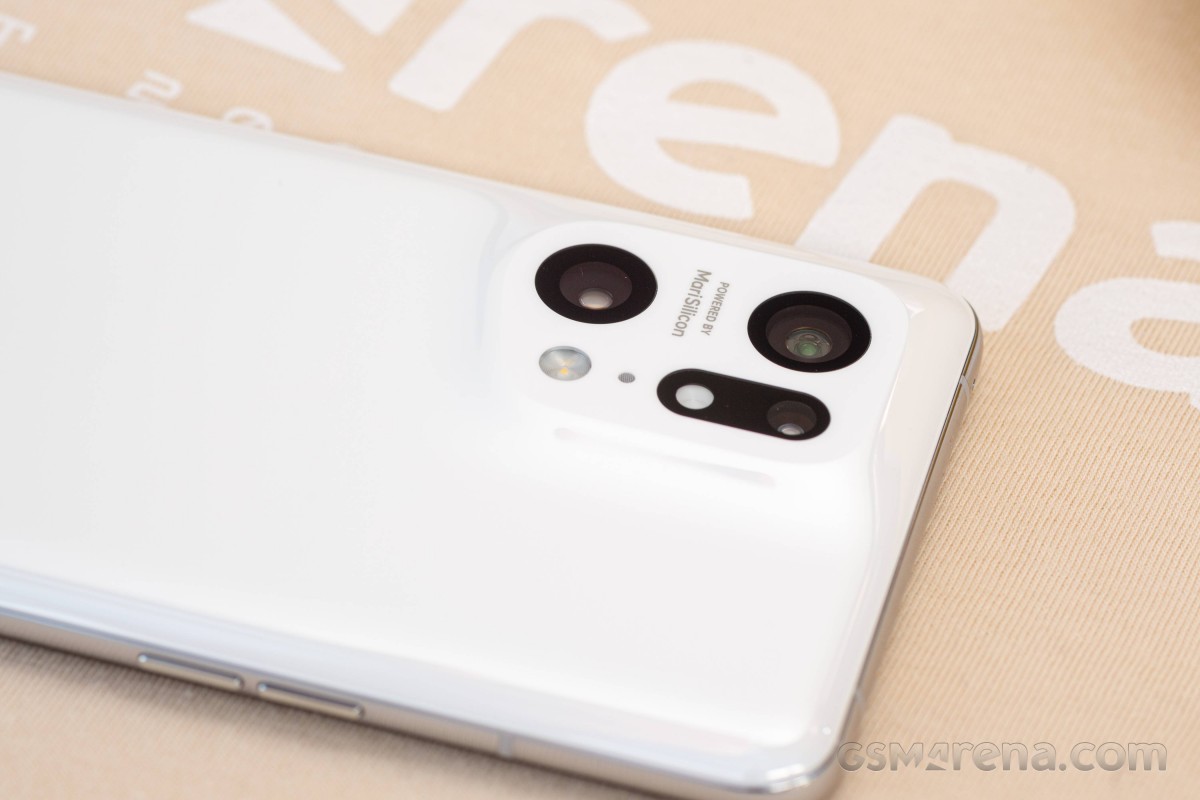 Down the right side of the rear is the Oppo logo, followed by a Hasselblad badge to emphasize the partnership between the smartphone and the camera companies. A bit oddly, but in a most welcome way, there are no further texts on the Find X5 Pro's back - our non-Pro was littered with regulatory stamps and whatnot. 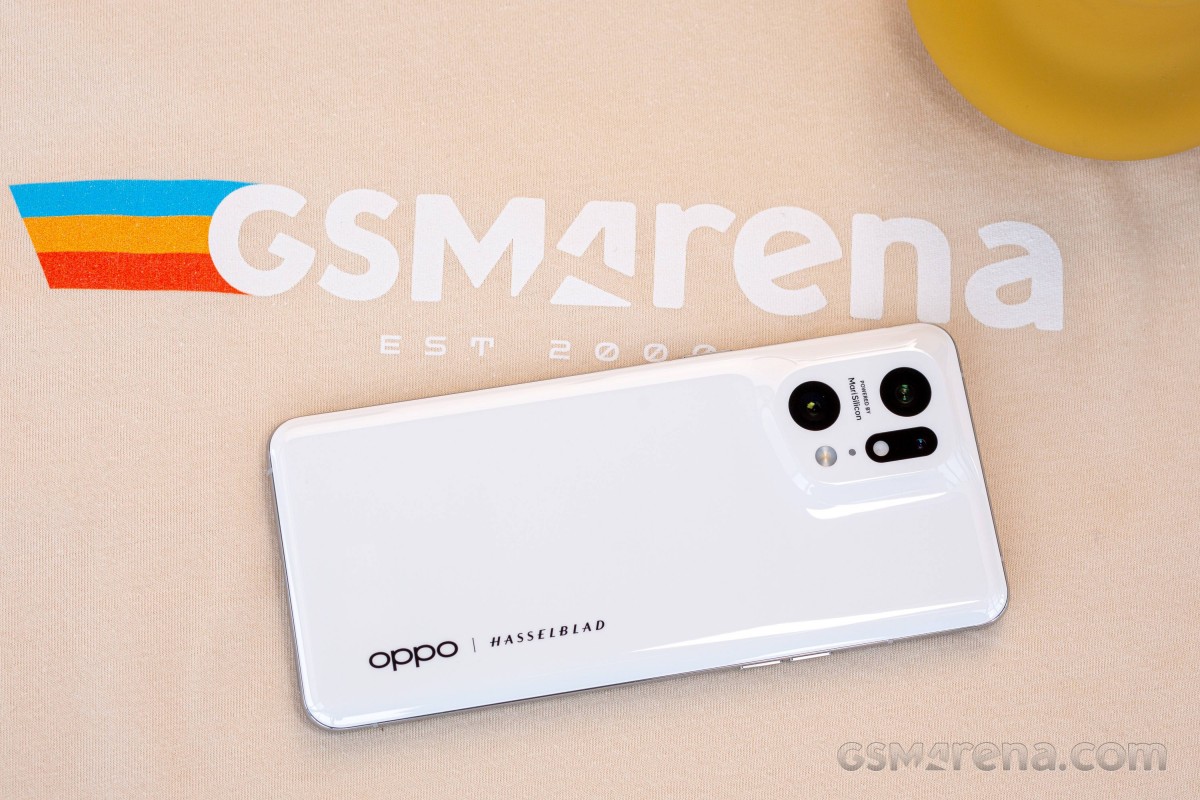 The ceramic slab curves towards all four edges where it meets the polished aluminium frame. The frame is thinner on the sides and slightly meatier on top and bottom and at the corners. It's interrupted by antenna strips in 7 spots, something we observed on the closely related OnePlus 10 Pro, iQOO 9 Pro and Realme GT2 Pro (all of them BBK Electronics-made phones).

The antennas positions all around the frame improve the phone's reception and connectivity capabilities. A combination of software and hardware optimizations improves the 5G cellular connection, Wi-Fi and NFC. The software decides which of the antennas to use depending on how you are holding the phone. Surprisingly, this also works for NFC too so you can touch another NFC device or a tap-to-pay terminal with any area of the upper half of the phone. It works at any angle - even with the frame or the screen facing the other device.

Oppo maintains a level of separation between the physical controls - the power button is on the right (with the signature green accent inside it), while the volume buttons, two discrete ones, are on the left. 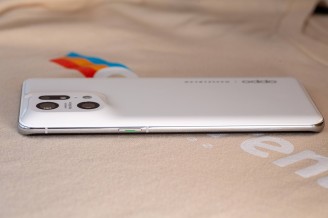 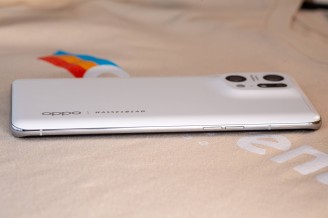 Power button on the right • Volume buttons on the left

The SIM slot is on the bottom, and it will take one or two nano-sized cards. There's no option for memory expansion on the Find X5 Pro, as expected. Also in this vicinity are the USB-C port, the pinhole for the primary mic, as well as the bottom loudspeaker. 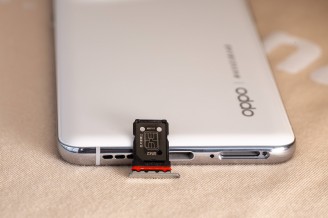 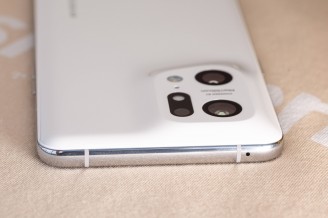 The other loudspeaker is on the front, behind a mesh-covered notched section of the Gorilla Glass Victus sheet that protects the display. The speaker also doubles as an earpiece, if you're into that.

Another cutout, this one in the actual display instead of its protective glass, is for the selfie camera - in the top left corner. 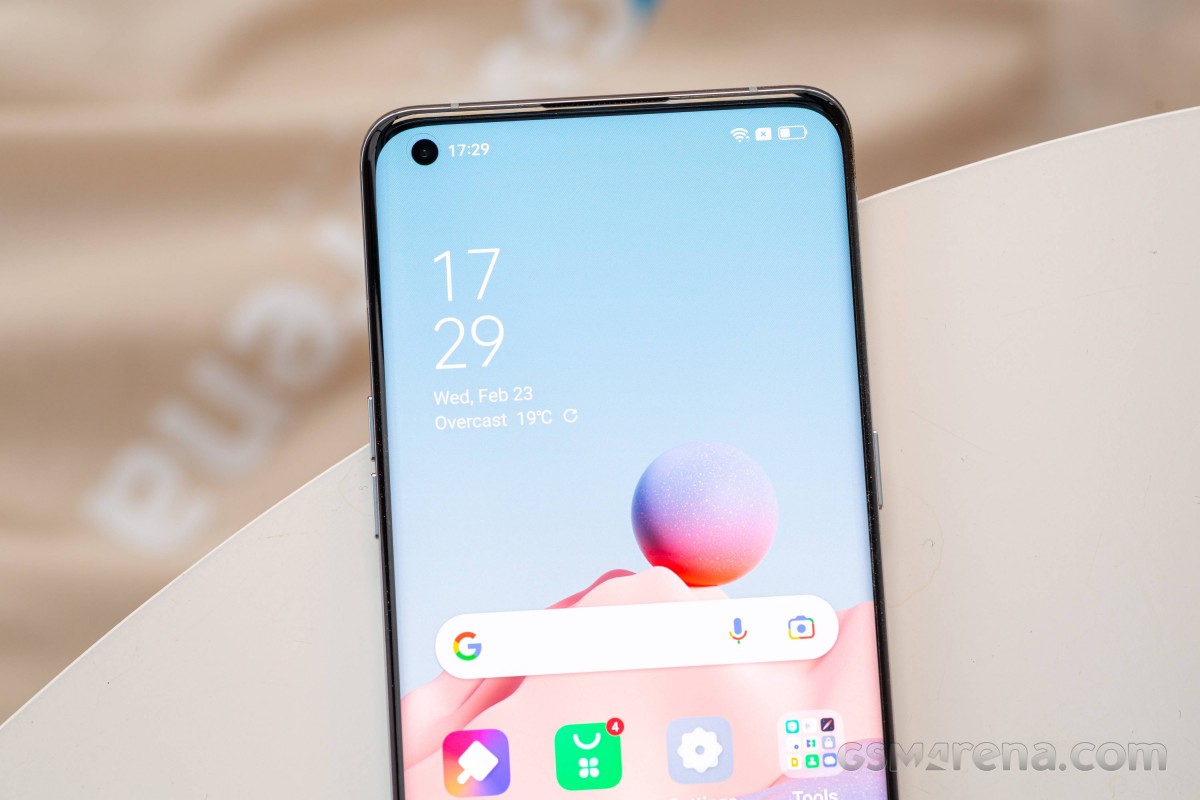 The AMOLED display is curved at the sides - not a whole lot but enough, perhaps, to irk flat display die-hards. For what it's worth, this reviewer encountered no issues with misinterpreted touch input at the sides, but that may not necessarily be everyone's experience. 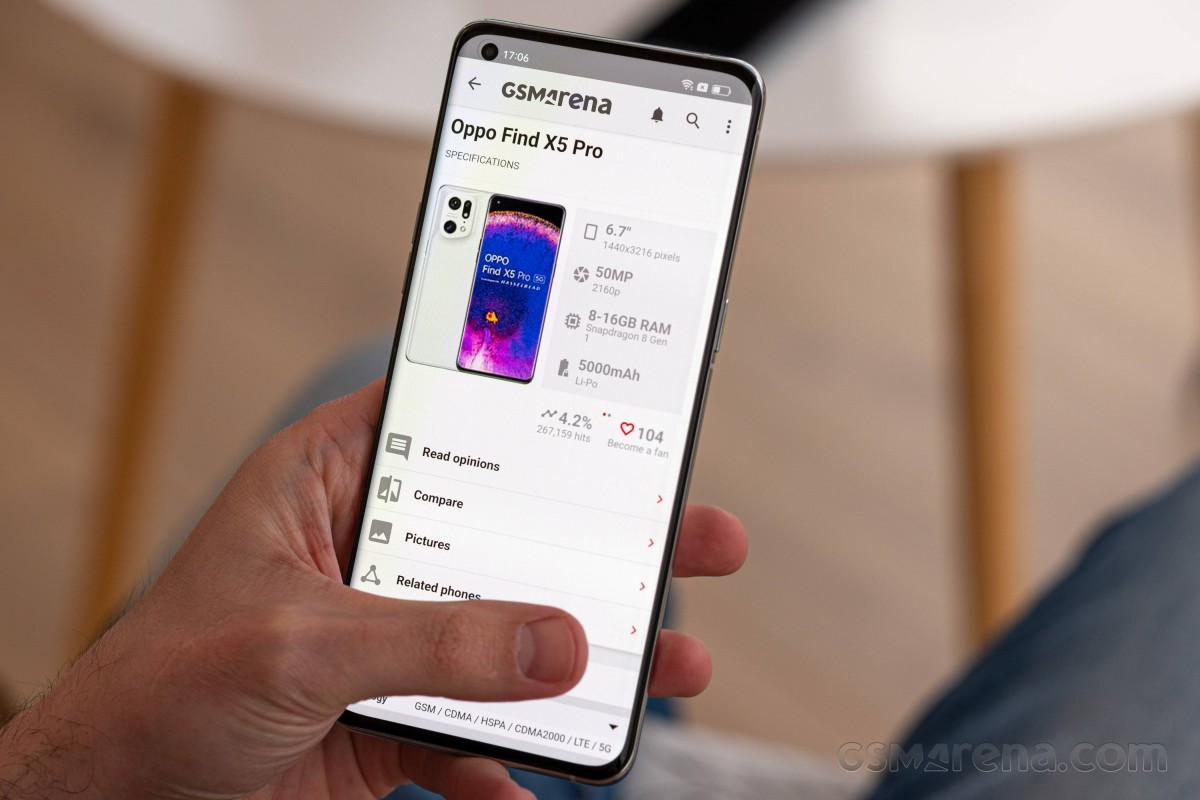 The black bezels around the display are fitting for a top-tier handset, we'd say. The top and bottom strips are slightly thicker than the sides but are the same between them, so the symmetry is there. 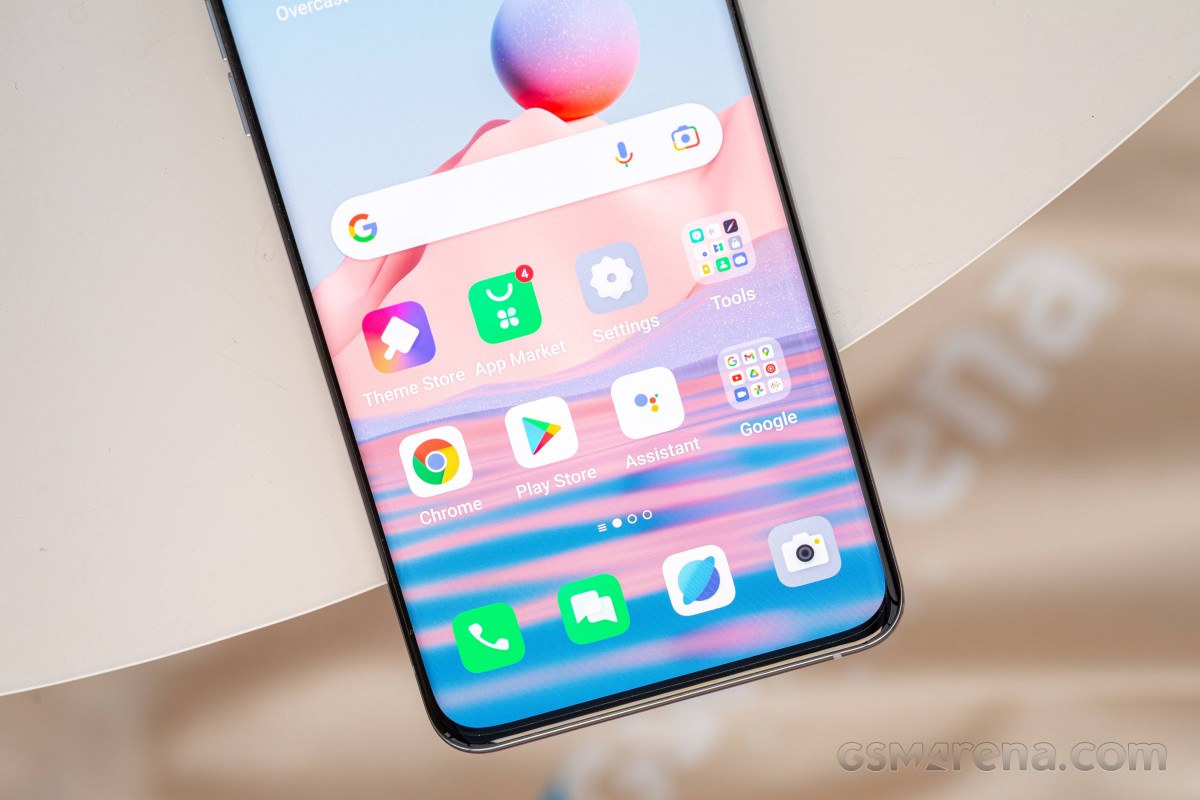 Embedded underneath the display is an optical fingerprint sensor. We appreciate its relatively high placement, particularly on a substantial phone like the Find X5 Pro, where finger gymnastics would be that extra bit more dangerous. 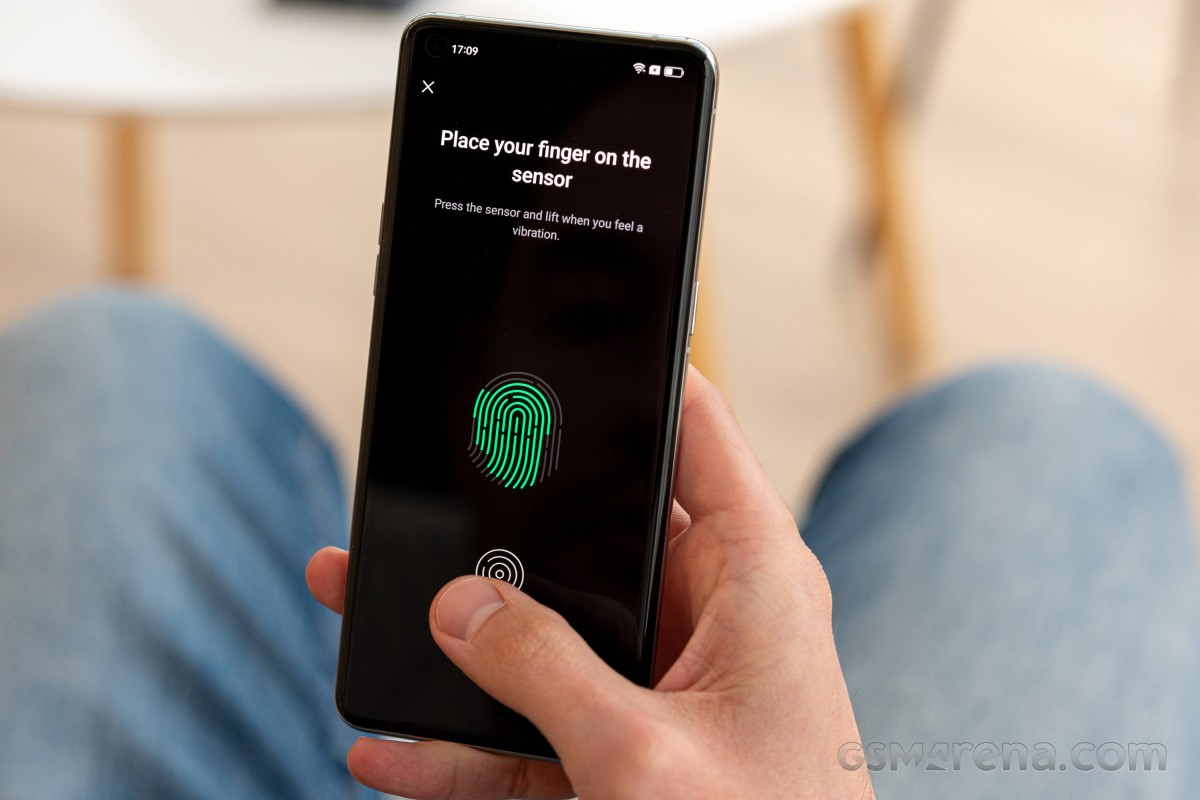 In summary, we find the Find X5 Pro's design and build pretty to look at and pleasing to touch, and we suppose the phone will be durable in the long run. Ergonomics are about what you can expect from a full-size high-end phone - it's big and heavy, but not bigger and heavier than its main rivals. Bonus points for the fingerprint sensor placement and separated physical buttons, while the curved display edges remain a personal preference.

X2 has tearing at 60fps. However, wide angle only works at 30. GPS is also a bit unstable.

That's good at least, GSMArena lists it as having no updates but I believe you. I have no plans on buying an Oppo phone though, they don't exist in the U.S and are way too expensive to import. I've been feeling like I own an Oppo phone...

The find x2 pro did get an update to Android 12. Although only in Q1/22 (at least in EU). Better late than never, but tbh I would not buy an Oppo device again because of that.