The Oppo R11 runs ColorOS 3.1, based on Android 7.1.1 Nougat. The new v3.1 launcher introduces WeChat payments via fingerprints, a dedicated night mode, and more refined interface. Naturally, the level of customization runs deep within the ROM, making it far off from the standard Google-developed mobile experience. Units sold outside of China still come with the full Google suite, which has resulted in having a few apps with similar functionality - one by Oppo, and another one by Google. 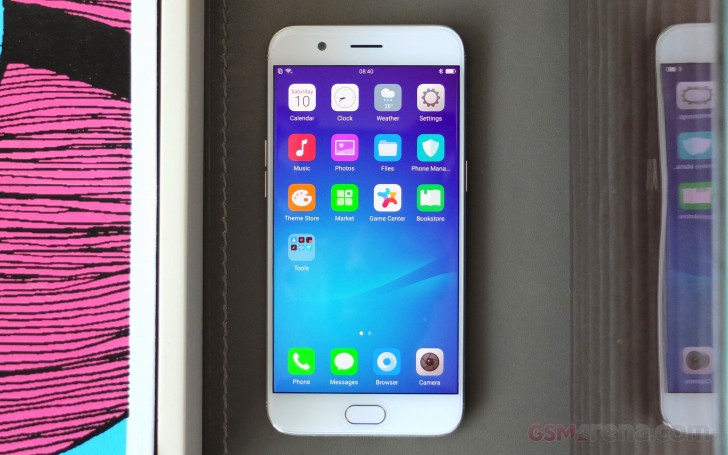 The OS isn't the most bloated, but we wouldn't call it a "clean installation" either. It comes pre-loaded with social networking apps, a document editor, and few minor-footprint apps.

The user interface is the familiar mash-up of Android and iOS in looks. There's no app drawer on the default launcher. Instead, every app you install gets dumped onto the homescreen.

The homescreen houses all installed apps

The Lockscreen features a constantly changing slideshow of images. You can subscribe to several different channels (e.g. photos of nature or cars or others) or provide your own imagery. The set of photos will be updated periodically, but only over a Wi-Fi connection, so it doesn't eat into your mobile data plan.

Once you set up the fingerprint reader - and you'll want to do that as otherwise the Home button can't wake the phone - you'll rarely see the lockscreen anyway. You could wake the phone with the Home button when the fingerprint reader is not set up, but that requires a few consecutive taps and you might as well double tap the screen (a configurable option).

The sensor is snappy and reliable with amazing recognition speed. It can secure more than the lockscreen - the phone can encrypt individual files or even whole apps, and make them accessible only with the correct fingerprint (or a Pattern lock as a fallback).

The notification shade features only notifications and nothing else. The toggles, brightness bar, music controls, Oppo Quick Share, and various app shortcuts are all placed in a Control Center-like second shade, which you pull up from the bottom. Yes, it's like iOS through and through.

One of the ColorOS highlights is the Screen-off gestures. They are simple commands done on a black screen - O to start the camera, V for the flashlight, several symbols to control the music player and a few custom options.

Finally, there is a Phone Manager quite similar to what Huawei and Xiaomi have with the same name. It handles memory cleaner functions, app permissions and encryption, and virus scan, among other things.