AnTuTu reveals that Oppo R11s will have a new dual camera

The Oppo R11s has mostly managed to avoid the paparazzi but it slipped up by leaving its specs at AnTuTu. Here are some of the changes that this wide-screen upgrade will bring.

The camera is different too – it now has two 20MP sensors, instead of 20MP + 16MP (the latter being the color sensor). So we’re due for an upgrade in photo resolution, but it will be interesting to see if (and how) the sensor resolution and lens aperture has changed. 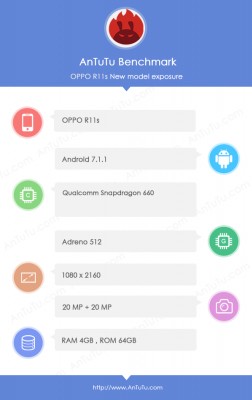 The phone will be officially unveiled on November 2. Other than the screen and camera, things seem unchanged – the Oppo R11s is still powered by a Snapdragon 660 chipset with 4GB of RAM and 64GB storage.

Before we go, here’s some food for thought – the OnePlus 5 uses the same camera (and much of the other hardware) of the Oppo R11. What do these changes to the R11s mean for the 5T?

In opportunity R11s front flash is present or not??

As per my instinct, there wouldn't be an AMOLED this time in the new one plus due to aspect ratio. Which can make some people have a second thought!! Hope i am wrong😋