The Gallery on the Oppo R1x is a custom job, but surprisingly one with less features than the vanilla app. Obviously, Oppo has approached this interface with a less-is-more tactic.

The default view is a grid of folders, with a name and number of images for each folder labeled underneath. You can't filter images by location, time, people or tags like you would in the stock app. Images inside folders are arranged on a rectangular grid and you have two options - image selection mode and start a slideshow. You can select multiple images (folders too) and then Share and Delete options become available.

The Oppo R1x comes with a pretty simple-looking video player, which extensive codec support - DivX, AVI, MKV, MP4 files played without a hitch, as did MOV videos. We had no issues playing files all the way up to 1080p resolution. AC3 sound was a no-go, but that's typically the case.

The interface for video selection is pretty basic too - a list of all available files. The player supports subtitles too, but there's only an on/off toggle here, you can't manually pick the subtitle file (so it would have to have the same name as the video file to work, and be in the same directory). Also, some foreign language subtitles didn't display all characters correctly.

While watching a video you get a timeline slider, play/pause along with forward/back controls, a lock option (which locks the display against accidental touches) and a pop up toggle.

A feature that seems lifted right off the Samsung/LG flagships is the pop-up player. It's a small floating window that lets you have other apps working underneath. You can move it around to get it out of the way, but there's no transparency option.

Oppo's latest music player has quite a simplistic interface and is very easy to use and navigate. The music player UI is pretty straightforward - your music library is organized into a local list of all music, favorites, artists, albums and folders. There's also an option to add a playlist.

The music app supports Dirac HD Audio though there are no other music enhancement options.

There's a playback mode button (normal, shuffle, repeat track) and a toggle for audio enhancement. That cycles through Dirac HD on and off.

Audio output is a mostly good

When connected to an active external amplifier, the Oppo R1x outputs mostly clean audio but with higher than usual intermodulation distortion. Volume levels are about average so the overall performance here is pleasing.

Plugging in a pair of headphones lead to a moderate hike in stereo crosstalk and even more intermodulation distortion. The rest of the readings are mostly unchanged but distortion levels so high would warrant a penalty point on their own. The overall output should still be good enough if you are not among the most demanding audiophiles though. 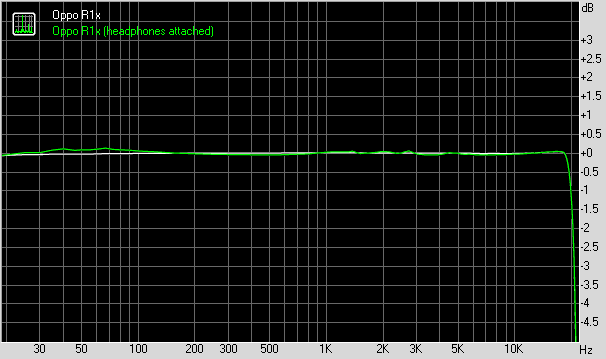 Trust me, the so-called OPPO R1x (R8201) lacks LTE Connectivity. My wife owns this beautiful device with the price tag of around $350 when bought last year. The price is even stable at around $300 now