Once the world's slimmest smartphone, the Oppo R5 has found a worthy heir in the face of the new R7. With the crown already forfeited, the company chose to walk out of that fight and made the R7 a touch thicker, but it still has every bit of the upmarket feel of the R5. 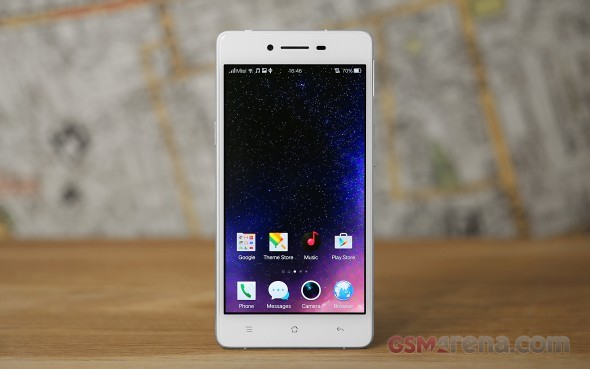 Although it may have lost the wow factor of the razor-thin R5, the R7 is an equally fine-looking smartphone, if not even more so. The metal back with the etched Oppo logo flows into the surrounding frame forming a unibody construction, and the front glass, gently curved at the edges (what has become known as 2.5D), is a pleasure to touch and behold.

By the way, we don't consider the R7 to be a replacement of the R5, as plenty of their hardware is practically shared. It's simply a more balanced device, its priorities gently guided in the right direction. Frankly, the push for slimness at all cost has never been our thing.

Hope you don't get this wrong, at 6.3mm the Oppo R7 is not exactly what you'd call bulky. The extra thickness has allowed for a welcome increase in battery capacity, a major weakness of the 4.85mm R5.

Rumors prior to launch hinted at a bezelless or edge-to-edge display, but this proved not to be the case. The R7 Plus is somewhat closer to that description, although it still doesn't truly amaze.

Instead the R7 packs a 5-inch AMOLED display, a careful step back from the 5.2 inches of the R5. This was perhaps done to clearly separate the R7 from its bigger brother, the 6-inch R7 Plus. Plus, as we said, battery life is now a priority and a slightly trimmed screen should help there, too.

The 3GB of RAM is another notch on the score sheet, and so is the introduction of a microSD slot - most welcome really given the rather limiting 16GB of built-in storage. It's the increasingly more common type, where the memory card shares a slot with the second SIM card - not the most convenient solution, but a compromise most will be willing to make.

We have Snapdragon 615 in charge, and that keeps the R5 firmly grounded in the midrange, regardless of how much RAM Oppo fits, or how spectacular the body looks. That said, the chipset is a proven performer in its class.

The primary camera remains at 13MP but now uses a Samsung ISOCELL sensor instead of Sony's in the R5. It's now graced with a Schneider-Kreuznach-branded lens, though it's gone a bit dimmer. On the front you get a new 8MP shooter, the highest pixel count in the company's lineup, if you leave the rotating N-series out of it.

You'd also be happy to learn than the R7 can take standard 3.5mm jack headphones, while the R5 sacrificed that feature in the push for thinness. There's still no FM radio to be found on the new model, but that's more of a niggle than a serious omission.

Oppo says it's working on a Lollipop build for the R7, but it was obviously not ready in time for launch, and we'll try not to hold that against it. ColorOS, on the other hand, has seen a few polishing touches in its 2.1 version, but in essence remains a heavily customized, iOS-inspired Android overlay.

As you can see, there's plenty to explore underneath the pretty shell, but in typical GSMArena fashion we'll start with the unboxing and hardware overview.

Hi Guys which 1 is best Opportunity R7 light or Samsung A7?? Please help me

Oppo R7 stylish phone however one you connect with Bluetooth hearing sound too low and phone vibration too low like once you keep in your paint pocket you will not feel your phone is vibrating Regards, Sunil +6596480082

that's not irony at all, that's a matter of personal preference