Oppo R9 will be announced on March 17

Earlier today a teaser confirmed that Oppo is getting ready to launch the Oppo R9, a possible successor to the R7 duo from last year. One thing that hasn't so far been clear is when exactly the new device will be announced.

Thankfully, that's now been revealed thanks to Oppo itself. The Chinese company has plastered a very large number of ads all over subway and bus stations in China, ads that look like this one: 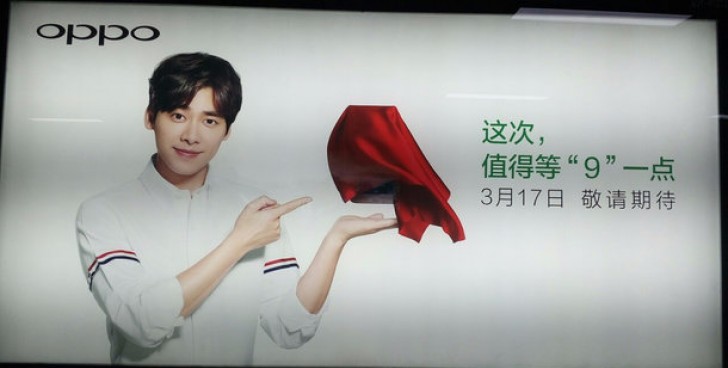 The ads state that there will be an event on March 17, during which Oppo will out a handset that has "9" in the name. So that pretty much settles it.

Unlike its predecessors, the R9 is rumored to sport some very high-end specs. It should be marketed as Oppo's top camera phone, and may include support for the company's recently unveiled Super VOOC fast charging.

The Oppo R9 will allegedly have a 6-inch QHD touchscreen, a 21 MP rear camera, a 13 MP selfie snapper, Qualcomm's Snapdragon 820 chipset, 3 or 4GB of RAM, 64GB of expandable storage, and a 3,700 mAh battery. It should run Android 6.0 Marshmallow from day one, and could look almost identical to Apple's iPhone 6s Plus.

Oppo's ColorOS 13 is coming on August 18

What is the price of OPPO R9

Me too. I love my Find 7a. I've been looking for a phone with these exact specs, and now oppo look to be releasing one so i can't wait!