The Reno6 Pro 5G has all the physical markings of a high-end phone - curved-edge display, metal frame, glass back with a fancy finish - its look and feel match its price. Our review unit is in the Arctic Blue colorway, its shimmery frosted surface fitting the name surprisingly well. 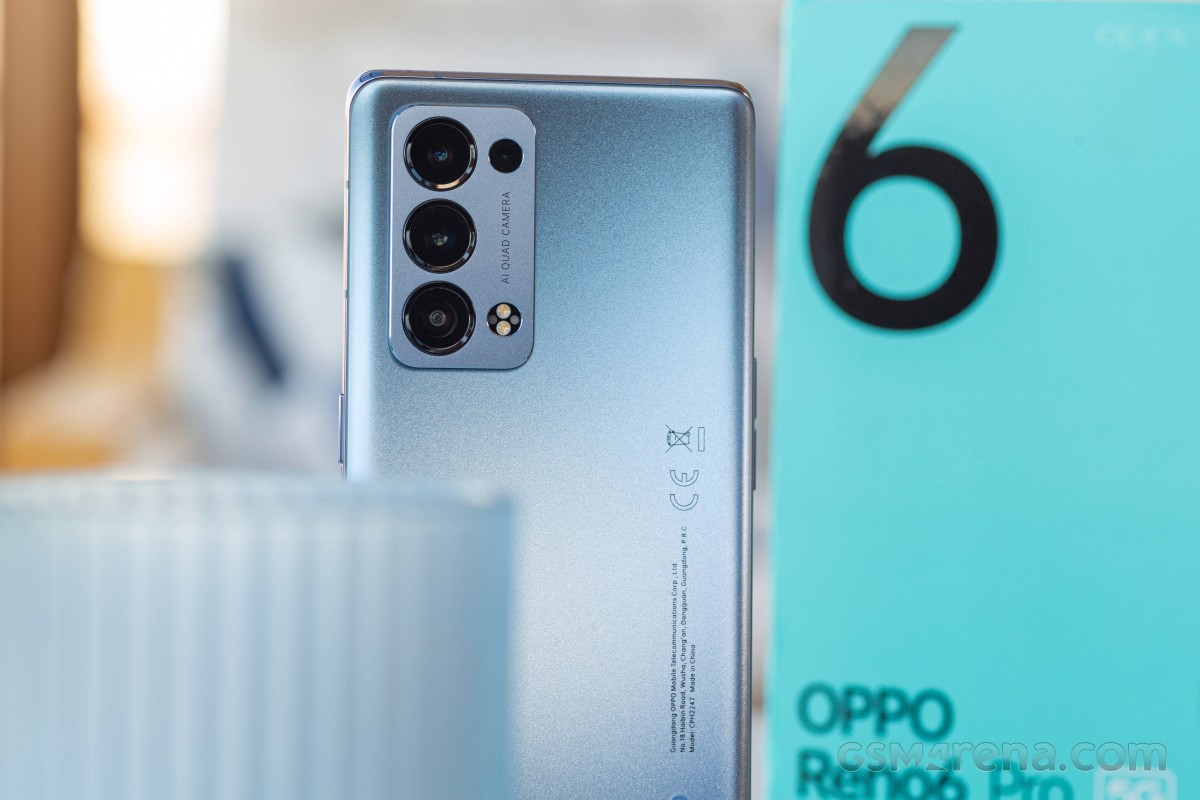 The back is made of glass, though Oppo isn't advertising where it's coming from, and Corning, too, is mum about it in the 'Is It On Yours' section on its website. Gorilla or otherwise, the panel doesn't pick up fingerprints, which is great, but it's very slippery, which is less so - the usual trade off. 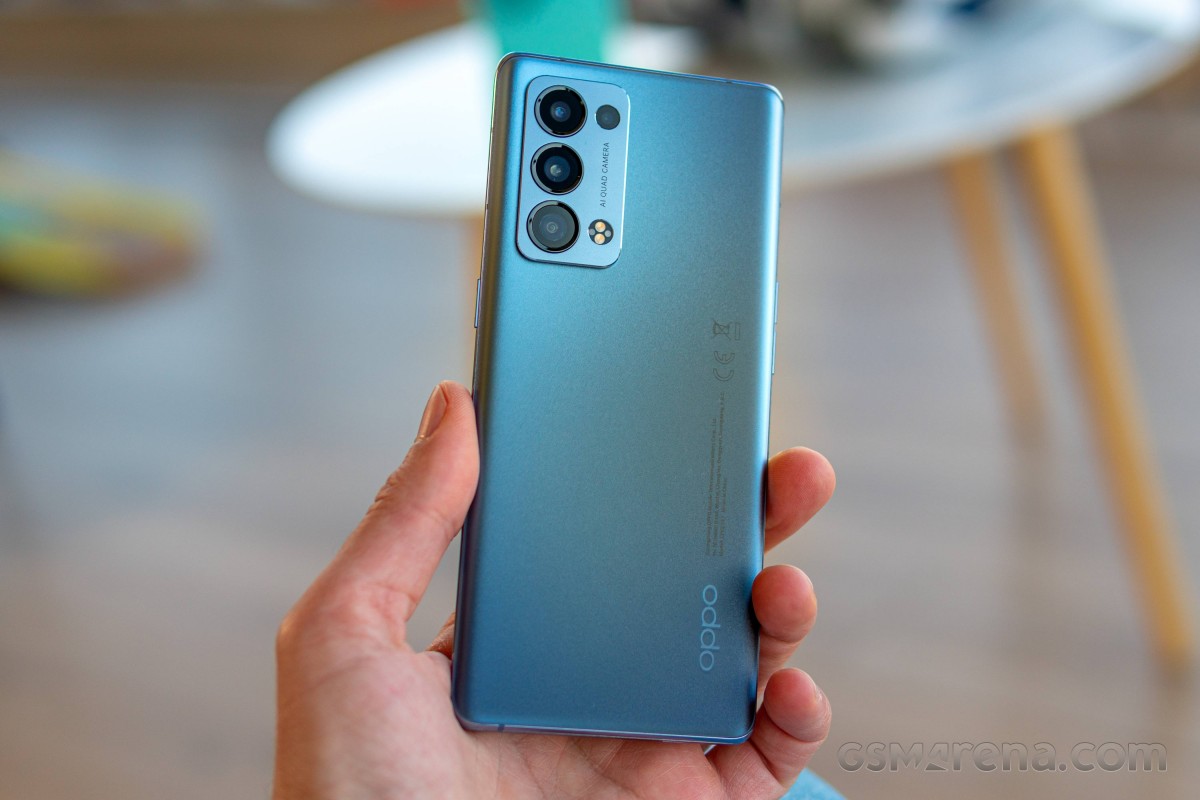 The quad-camera island also hosts the flash LEDs and an extra ambient light sensor. The assembly sticks out enough that the phone will rock if you type on it while it's lying on a table.

Both this 'issue' and the slipperiness can easily be resolved by using the included case - while nowhere as premium feeling as the phone itself, it's at least transparent, so the Arctic Blueness makes it through.

We're hardly fans of the whole paragraph of tiny text Oppo has decided to print on this one - there has to be a more subtle way to satisfy regulatory requirements. 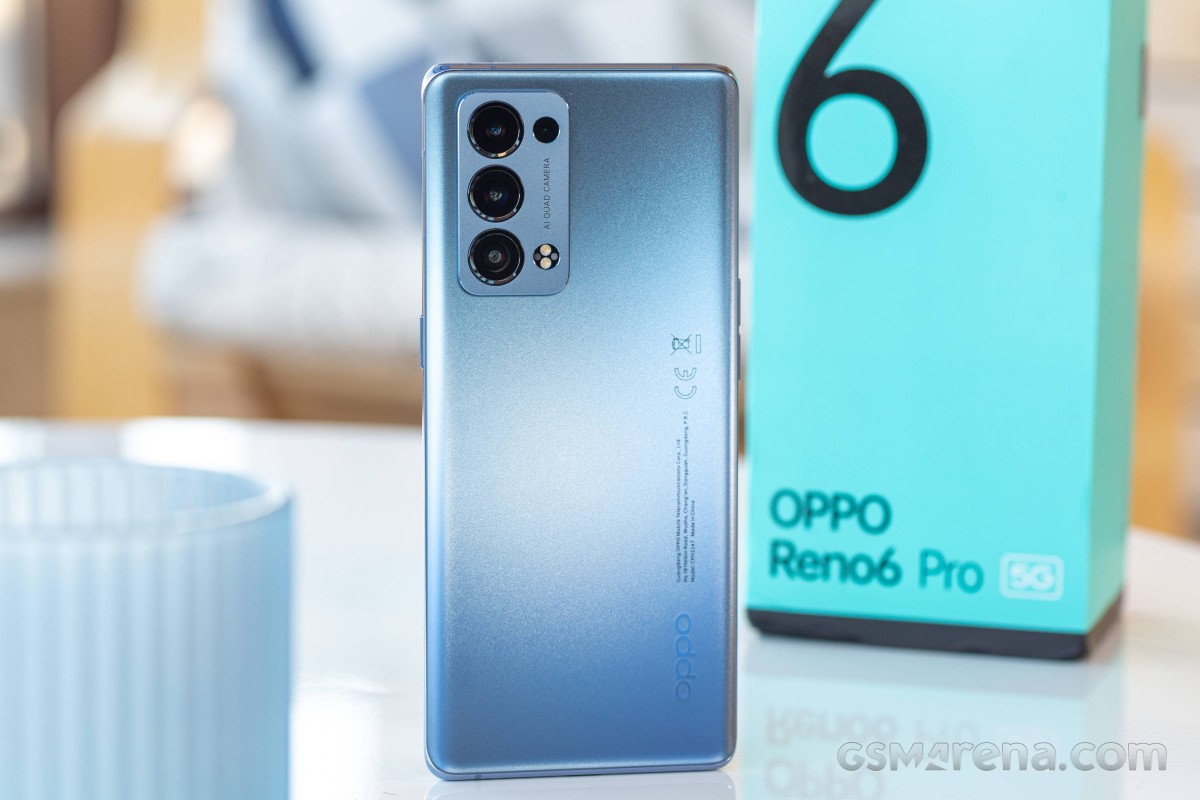 The back curves to the sides into the polished aluminum frame, matching the curved edges of the display. We get that some people aren't fans of curved displays, but there's an undeniable feel of poshness they tend to bring.

Here, that's somewhat ruined by the factory-applied screen protector, whose edges rub your fingertips the wrong way. It also has a tendency to accumulate dirt in its punch hole for the punch-hole selfie camera and that's hard to clean. You can always remove it, in which case it would be nice to know what glass is protecting the display, but Oppo isn't saying that either. It's probably a good one, but which one? 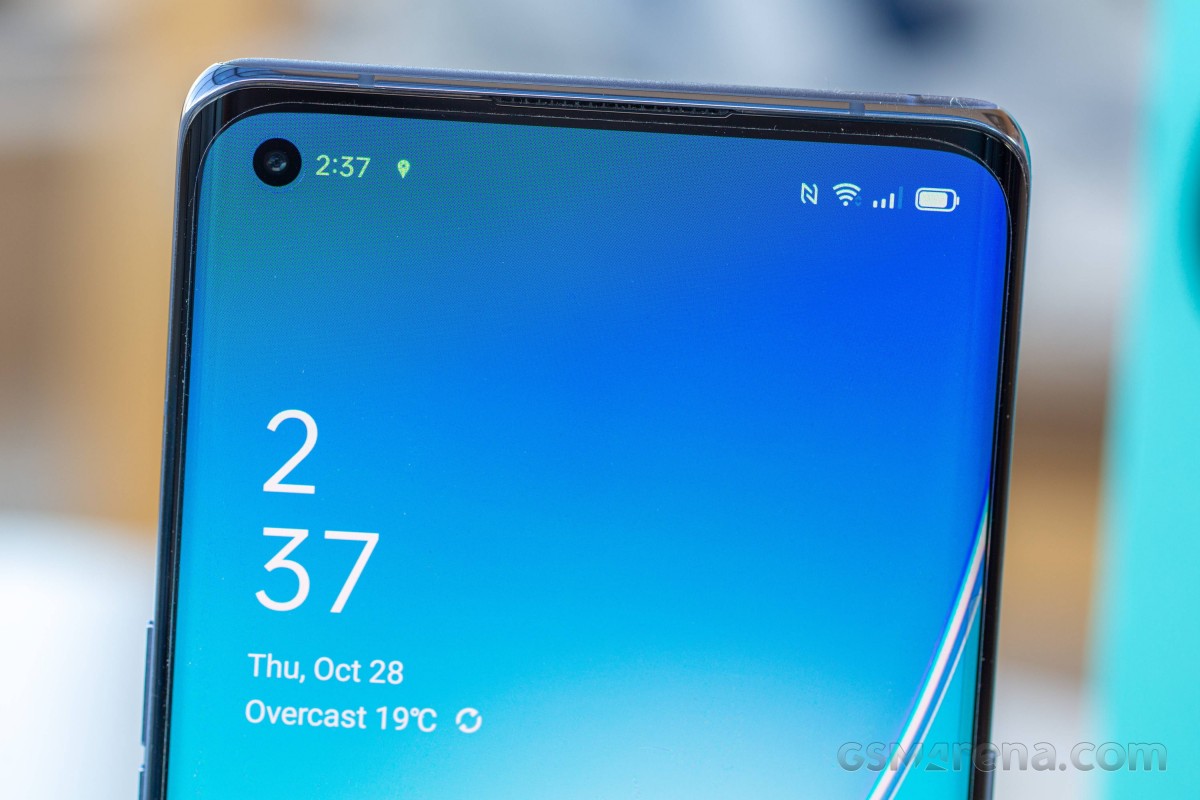 The smallish top and bottom bezels are similarly sized and together with the minimal black strips on the sides make for a premium look - a bit of a generic premium look, if you will, but premium nonetheless. 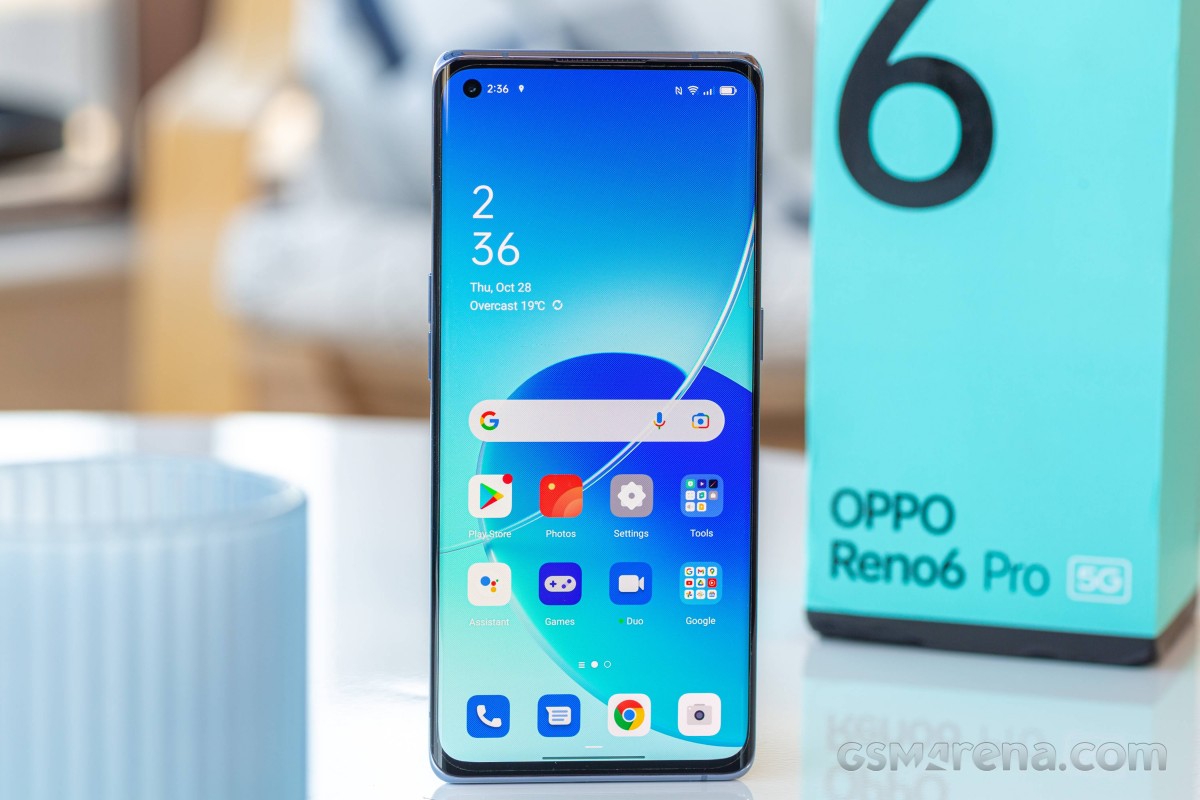 Oppo continues with a control layout that many makers have moved away from and splits the power button and volume controls between the two sides of the phone. The power button is on the right and has a signature green accent, while the separate volume buttons are on the left. All click nicely.

Power button on the right • Volume keys on the left

The bottom of the phone has the USB-C port, the primary loudspeaker (earpiece up top serves as the other one), the primary mic, and SIM slot (dual nano-SIM, no microSD).

On the opposite end, there's just a mic pinhole amidst a plastic inlay that's very likely the cover for the 5G antennas.

The green gasket on the SIM tray might lead you to believe that the Reno6 Pro 5G is dust and water-resistant, and while it may very well be, it doesn't have a formal IP rating. That's a very notable omission on a phone this expensive and one we can't overlook.

The Reno measures 160.8x72.5x8mm and weighs 188g. Virtually every potential rival is in the same ballpark, with perhaps the Galaxy S21+ being just tangibly heavier at 200g. We'd say the handset feels more compact than the numbers suggest thanks to curved sides, and is the slippery back giving it an air of lightness too, or is that all in our heads? 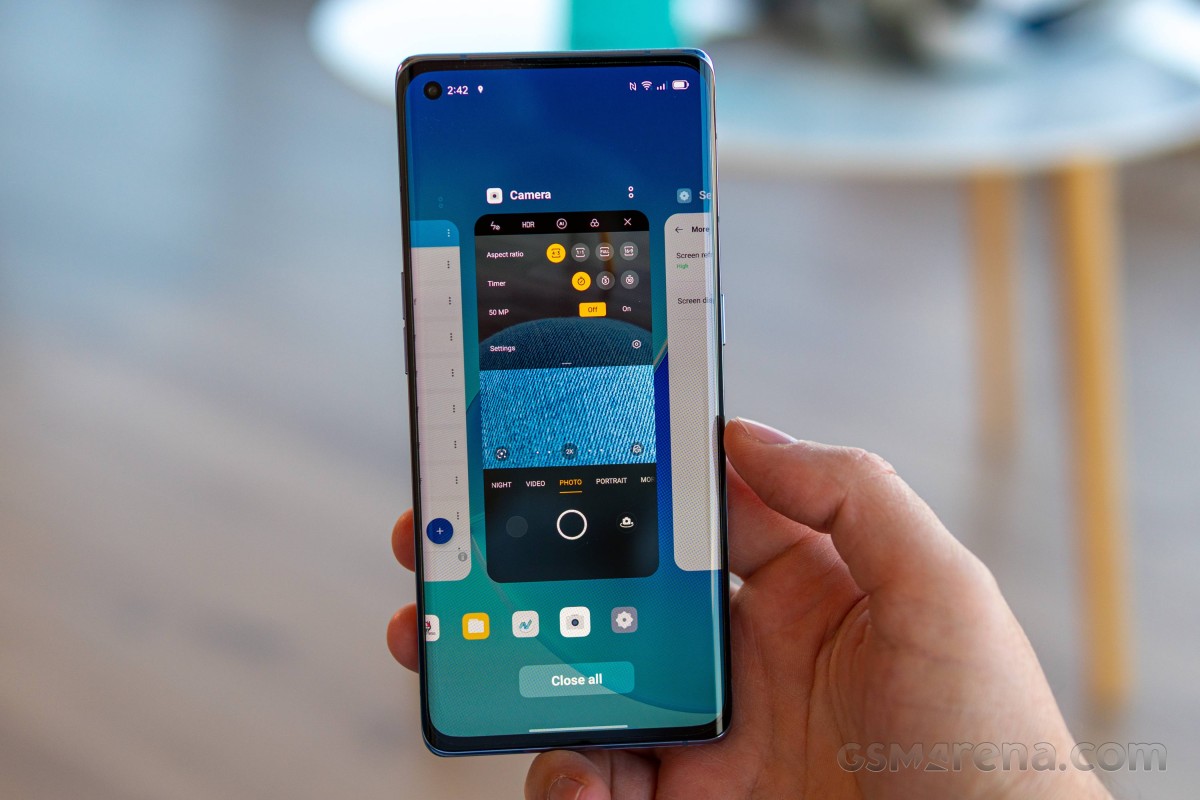 Low resale value can work in your favor too if you don't mind buying a few months old used phone. I am sure after 3 or 4 months you will see people trying to sell the Reno 6 Pro at significant loss compared to retail price.