This year the pop-ups are thriving as the makers are getting rid of the unsightly notches. And while the Reno 10x zoom is hardly the first one to utilize a motorized pop-up, its solution represents a completely new take on the otherwise fast spreading technology. 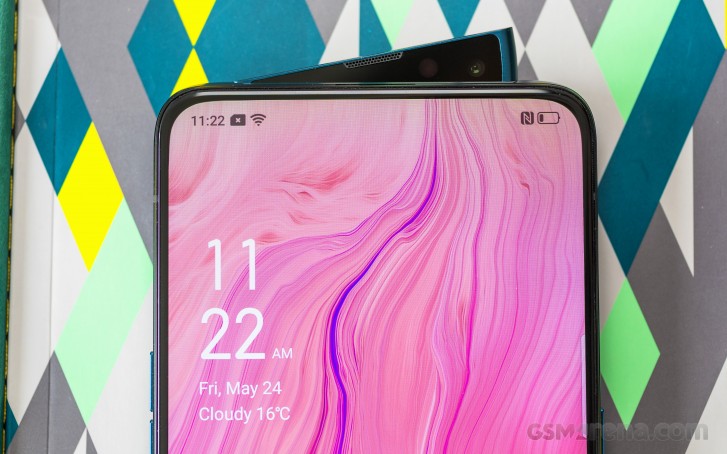 The company has a rich history with moving parts starting with the manually rotating camera of the Oppo N1 in 2013 and the motorized rotating snapper of the Oppo N3 the year after that. The Find X and F11 Pro both have different kind of motorized pop-ups - the X's entire top part slid up revealing all cameras, while the F11 Pro had a small pop-up for the selfie shooter only. And yet just a year later the Oppo Reno 10x zoom brings another novelty solution.

The phone looks like a regular glass-sandwich flagship. The front is all screen glass, no notch; the back is all frosty glass with many cameras; and a one metal frame holds everything together.

But the closer look reveals the maker's own touches and its personal take on the design.

The whole front is occupied by a 6.6" AMOLED with nicely rounder corners and minimalistic bezels. There are no eyesores around, be it a cutout or a punch hole. It's as immersive as it can get these days. 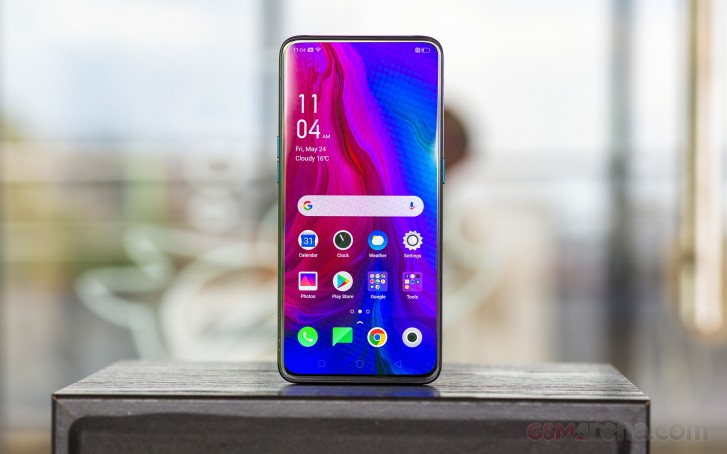 Keeping the OLED panel safe is the latest Gorilla Glass 6, also known as the toughest glass on Earth as per Apple's PR claims. It's almost completely flat, aside from the almost unnoticeable 2.5D edges existing only ensure smooth sliding of your fingers towards the edges.

In the lower part of the screen is an optical fingerprint reader, which is the fastest we've tried to date. It's super accurate and is a good match for the conventional sensors in terms of speed. We'd guess it's the same one used on the OnePlus 7 Pro, though in our experience it behaves a little bit better on the Reno even if at this point the differences are small enough not to matter.

The pop-up piece has a triangular shape this time around and takes up most of the top part of the Reno. It holds the actual earpiece that also doubles as a speaker, the 16MP selfie camera, and a very-well disguised LED flash. Don't worry though - you don't need to raise the pop-up for every call as sound does seep in through almost invisible tiny gaps. 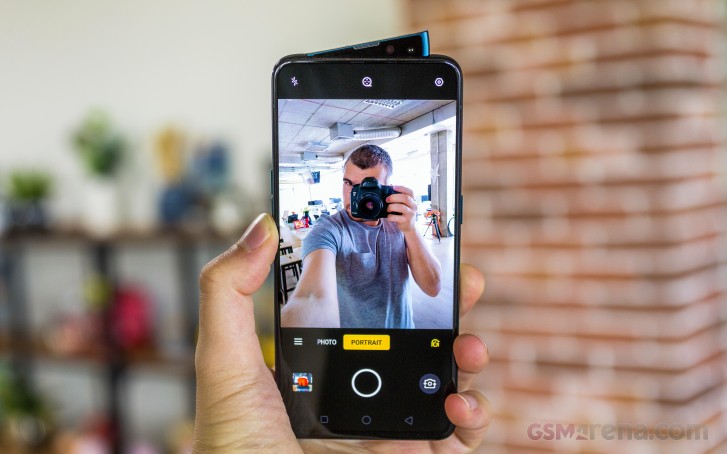 Interestingly, on the back of this pop-up is the another flash - the dual-LED used by the main camera. We can understand why Oppo has put it there - with all these new modes for shooting in the dark, the flash is seeing less usage and here it sits hidden from sight until needed. 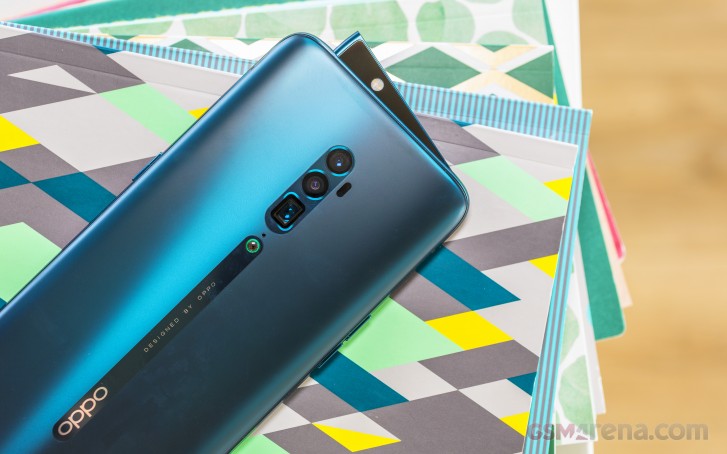 The motor-driven pivoting module opens in 0.8s seconds - that's quick enough to even be usable for face unlocking purposes although it's hardly the quickest solution. Oppo guarantees up to 200,000 actuations without fail translating into 11 years of raising it 50 times a day, and that's plenty.

The mechanism also has some smarts behind it and will retract automatically if the phone senses it's falling, protecting the shark fin from impact. Additionally, it won't try to open if it feels resistance and will instead try again a moment later. 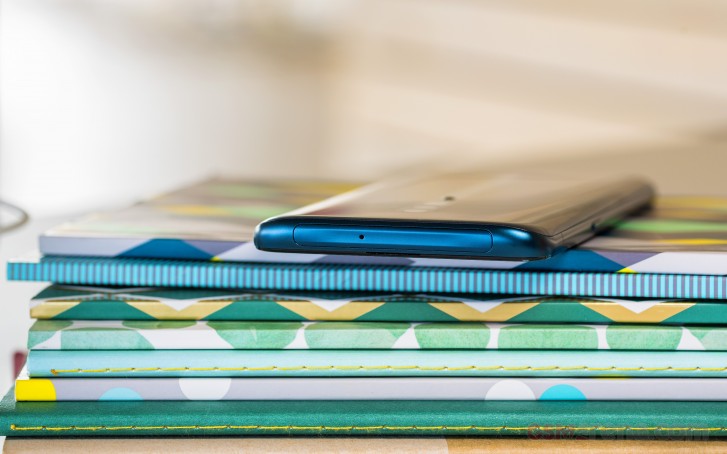 The back of the Reno 10x zoom is really interesting as well. It's made of Gorilla Glass 5 and is slightly curved towards its longer sides. Most of the glass on the Green model has this very familiar frosty finish, which we've grown to like for the past two generations of Oppo and OnePlus phones. It almost feels like metal, but it actually is glass and the feeling on touch is pretty cool and unique.

The Reno 10x is available in two colors - Ocean Green and Jet Black - only the first of those has the frosted finish we talked about, while the Black is just regular glossy black. Both options have some special layer that adds up for gradient effects under different light, so the Reno would be pretty cool either way. 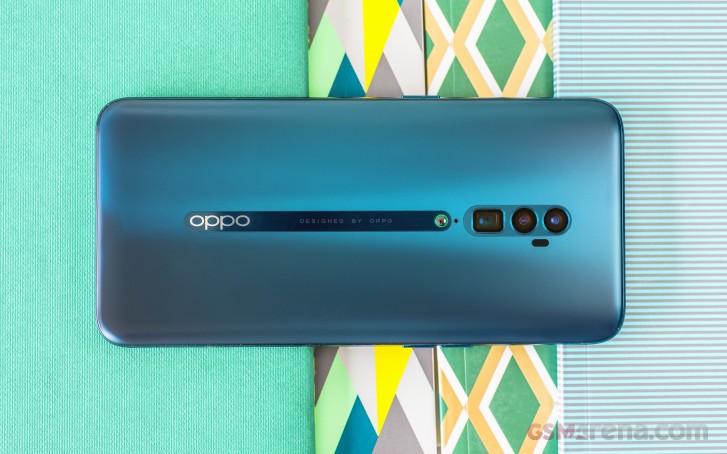 There is no camera hump on the back of the Reno. All three snappers are sitting flush with the glass, which is such a rarity these days and we had to check this twice. You can easily notice the glossy accents around the snappers and the thin line with the Oppo logos. These interruptions work very well for the rear and even if we'll never stop being amused by the "Oppo, designed by Oppo" labels, we find them to work well to diversify the back.

The camera setup itself includes a 48MP snapper on top, the an 8MP ultra-wide-angle shooter in the middle, and the end of the 130mm periscope lens for the 13MP sensor are the third thing you can see. 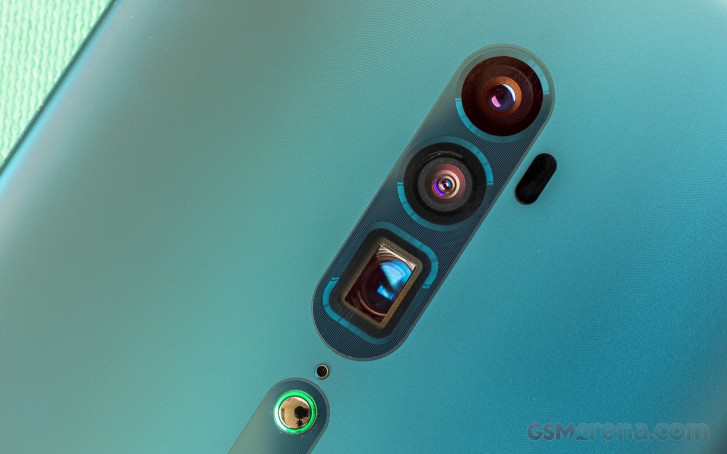 You've probably noticed the tiny circle surrounded by a green paint. We thought it's purely for decoration, another design accent if you will, but we realized it does serve a purpose - it protrudes just enough to keep the camera glasses from scratching when the Reno is lying on a flat surface.

The frame of the Oppo Reno 10x zoom is made of metal and matches the green paint of the back. It has the same frosty finish and some sharper carvings, which not only boost the looks, but the grip as well.

The Oppo Reno 10x zoom has stereo speakers - the earpiece doubles as a loudspeaker, while the other one has a grille at the bottom of the phone, next to the USB-C port. Also at the bottom is the hybrid-SIM slot.

There is no 3.5mm audio jack on the Reno, nor an IR blaster.

The Oppo Reno 10x zoom is a large phone, no two words about that. But it also offers one of the most immersive experience you can get today thanks to its uninterrupted AMOLED screen.

Handling the Reno 10x zoom is reasonably comfortable with the frosted finish and sharper frame delivering a nice boost. Even without the supplied case, the Reno isn't slippery and overall we never felt we'd drop it while shooting pictures, playing games or just browsing on it.

Reviewing after 48 hrs testing and usage As soon as mobile is delivered I started unboxing. Very nice packaging and nice case included(which is definitely far better than r 500rs case), Best thing is Type C headphones are included i...