Behind that name that has less than ideal ring to it, there's a properly nice phone with more than one standout feature. We'll start at the top with the most obvious one - the pop-up selfie camera. 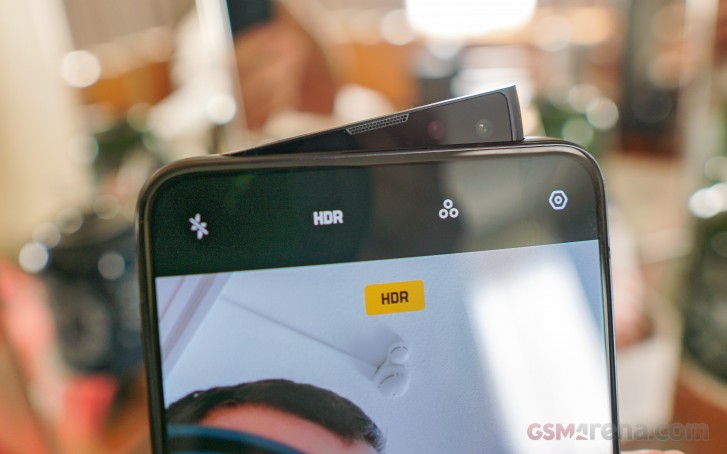 Oppo's been adding moving pieces to its phones since way back in 2013 when the N1 dispensed with the front-facing cam by having the main one rotate to take selfies. The N3 next year added a motor into that mix to make things even cooler. In more recent times we have the Find X which puts all its three cams on a motorized platform - whether it's selfies or photos of not-yourself, you'd hear the motor whirring (but in a good way).

For the Reno 10x zoom, it's just the selfie cam that rises up from the inside. It's installed on a motor driven pivoting module that opens in 0.8s seconds - it's quick enough to even be usable for face unlocking purposes. Oppo promises up to 200,000 actuations without fail and quick mafs points to 11 years of raising it 50 times a day, which sounds like plenty.

The mechanism also has some smarts behind it and will retract automatically if the phone senses it's freefalling, potentially protecting the shark fin from impact. Additionally, it won't blindly persevere if it feels resistance and will instead try again a moment later.

There are other bits on the pop-up piece too. Interestingly enough, the earpiece is there as well. It doesn't need to raise the fin though, as sound does seep in through the tiny gaps so that's one reason fewer to add to your fin actuation count. On the back of it Oppo's placed the dual LED flash - that way it won't spoil the look of the rear panel when it's not in use, which is most of the time. 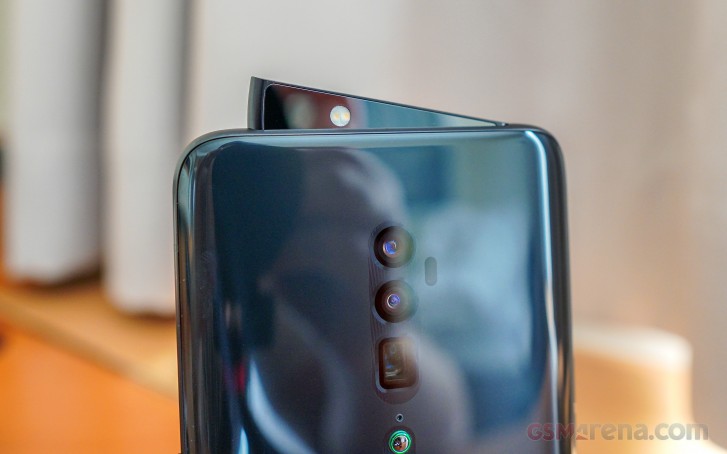 That's not to say there isn't a lot of stuff on the back as it is - a total of three cameras are placed along the central axis and a laser autofocusing window is to their right. The cameras sit flush with the Gorilla Glass 5 back panel and if you're worried about them scratching, Oppo's got you covered - the green pimple is not just a design accent but it's put there to keep the cameras away from harm when the phone is lying on a flat surface. 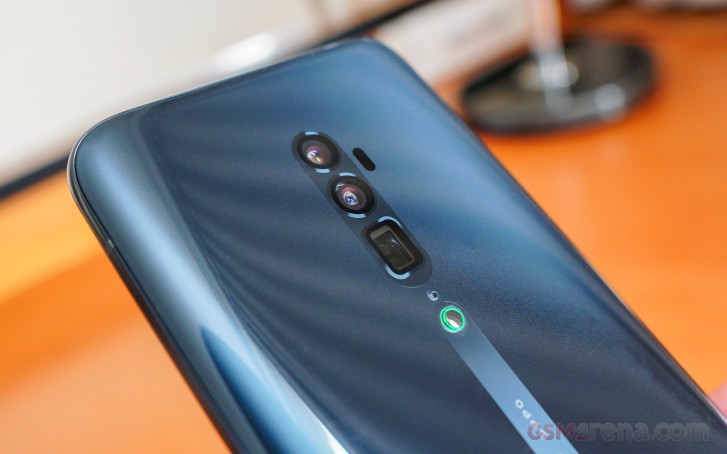 And those cameras are worth protecting, indeed. The 10x zoom in the name gives you an idea what to expect and the specifics go like this - there are a 16mm-equivalent ultra wide module and a 130mm telephoto, plus a regular 26mm one in between. Surprisingly, Oppo has chosen to name the smartphone after its hybrid zoom capabilities rather than the real zoom factor of its periscope lens, which is 5x. 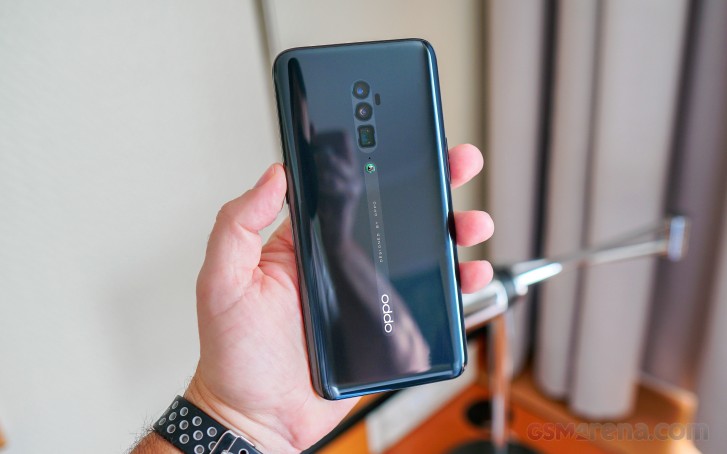 The Reno 10x zoom will be available in two colors - Ocean Green and Jet Black. Each of these will come with a distinct finish. Or, rather, the black one will be regular glossy glass, while the green has a matte frosted effect. 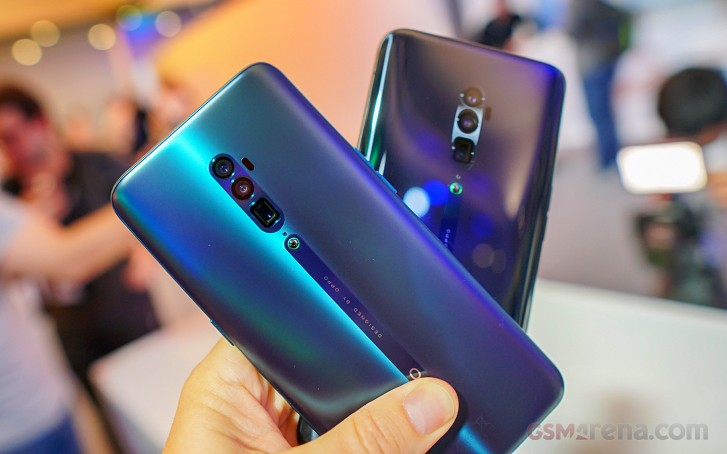 We're leaning towards the green one as our favorite, though we found it a bit more slippery. It's infinitely better when it comes to not getting all covered up in fingerprints, which is nice.

The frame of the phone is made of aluminum and has a satin finish. There's a power button on the right, a little above the midpoint. It's pretty big which helps usability and it's got a green accent which helps looks. The volume buttons are on the left, a bit higher up than the power button.

One thing you won't find on the Reno 10x zoom is a 3.5mm headphone jack. The USB-C port is centered on the bottom, the card slot is to the left of it and the primary mic is on the other side. The main loudspeaker is here too and it's one of a stereo pair - the earpiece doubles as another channel (yay!).

That means you'd be enjoying stereo sound when watching videos on the notchless near-bezelless AMOLED display. The moving selfie cam has allowed the Reno to have a screen with no cutouts, which is what we're ultimately after. There's a slightly thicker chin below the display so we've not quite reached the point where a phone is all screen on the front, but we're drawing closer. 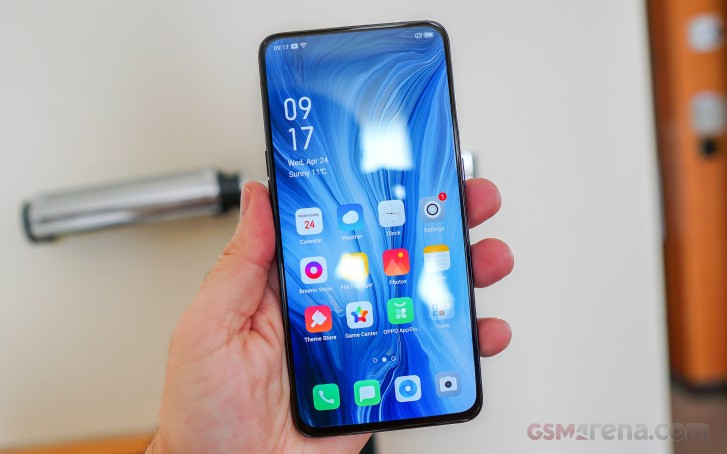 Being AMOLED, the display has no issues when used outdoors. In our side-by-side experience with the P30 Pro, the Reno was marginally dimmer, but we'd have to properly test it for the exact numbers. 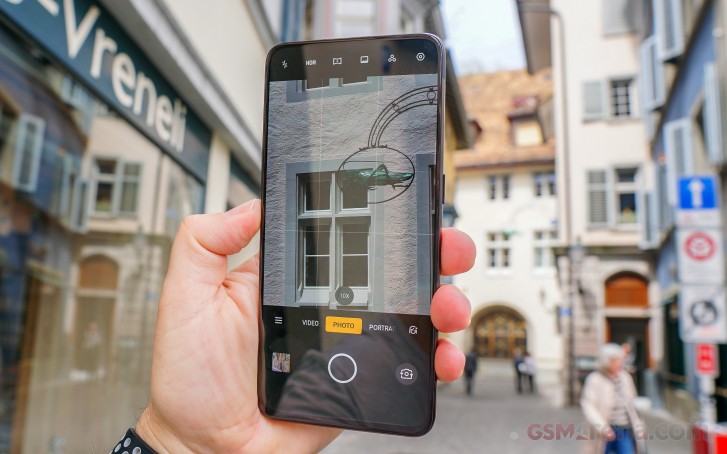 There's an optical fingerprint reader underneath the display and it's properly quick - it's perhaps the fastest one we've seen. Here it is in action.

Let's now move on to the star of the show, the triple camera on the back.

96kbps is really enough for good quality sound, already almost at mp3 beginning days, but definetly now with modern encodes. ..so, without listening to the vid, id say the problem is the microphone quality or size or... placement.

Can you hear the low quality sound in video taken? Oppo didnt learn from past I see. Who on earth would set the bitrate of camera audio to 96kbps only? Oppo would :)))

why? As it is most sensible notch less option for me, I will order it.